The Blackfeet Nation produces some of the best wildland firefighters in the world. Producer Barrett Golding traveled the Lewis & Clark Trail for its 200th anniversary, and he ran into one crew of Blackfeet smokejumpers in Idaho’s Clearwater Forest as they prepared for work.

CURWOOD: This year marks the 200th anniversary of the Lewis and Clark expedition. We wondered who lives along the trail now, from the Northwest Coast to the mouth of the Missouri. Producer Barrett Golding bicycled the entire Lewis and Clark Trail and sent us back a series of audio postcards like this one from Idaho's Clearwater Forest, where he talked with firefighters getting ready for work.

WELLS: This is Blackfeet 39, wildland firefighters from Blackfeet Reservation in Montana. Some years you have over 100 dispatches just to Blackfeet. We man the most firefighters in probably the United States, 20 to 30 crews at once. I was up here last year and I think we had, like, eight fires in ten days. And every fire's different and you have to think about your escape route, your safety zones, and trees falling down. So you can't hear them when they're falling. Only time you hear them is when they hit the ground. Then you've got to think about the drought conditions when it's dry. It's just like pouring gasoline on a piece of wood and lighting it. That’s how fast it will ignite. 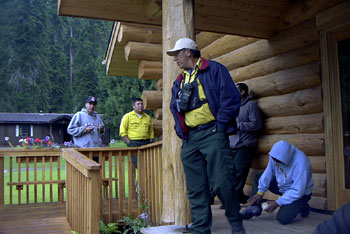 GOLDING: How long have you been doing this?

FIREFIGHTER: Gets in your blood.

WELLS: I just grew up with it... Our dads mostly all did it when they were young. It's a kind of a pride thing with the Blackfeet. We just take pride in trying to be the best firefighters in the nation, probably the world, too. Yeah. I’d say the world.

FIREFIGHTER: The smoke gets in your blood.

FIREFIGHTER 3: Best of the best.

MEESO: Yeah, kind of like the Marines of the firefighters. We’re the first ones that go over there and the last ones to leave, mostly. So you see a lot of action, and it's scary, but you get used to it. And you kind of like that rush it gives you – getting chased by the fire and almost getting hit by a bunch of trees. Yeah, we had a couple close calls when we were back-burning down this mountain. And then the fire was coming up – that creates its own wind. So it blew up in our face and come up after us. And we were watching it, make sure it wouldn’t jump the line, and it did, and it just sounds like a jet taking off. That's how it sounds. So we got into our vehicles and we headed out and went further down the road and watched it blow up a little bit. And then we went back in there, trying to put it back out. Because there were houses down below, so we had to watch out. It's fun. Gets lots of money, a lot of problems solved. It's hard work. You stay away from your family a long time. We kind of miss them, and we write them every so often. I love it.

CURWOOD: Nicole Meeso is a chief mountain hotshot, and Eldon Wells is with the Blackfeet 39 Wildland Firefighters. They're at Golding's "Portraits of the Lewis and Clark Trail, 200 Years Later" and are part of Hearing Voices, funded by the Corporation for Public Broadcasting. For more audio images and interviews from the Trail, you can go to our website at loe.org. That's loe.org. And for this week, that's Living on Earth.

Next week we celebrate Earth Day by hearing from young people in inner cities across the country about their environment.

GIRL: I live in the part of Camden known as South Camden. Across the street from my home is an abandoned house, one of dozens in my part of town. There are times when I am sitting on my steps and I see rats from the abandoned house running across the street. The yard next to the house is full of trash and weeds.

CURWOOD: The voices of youth, next time on Living on Earth. And remember that between now and then you can hear us anytime and get the stories behind the news by going to loe.org. And while you're there you can also get a chance to win a safari for two to Africa. That's loe.org.