The National Petroleum Reserve takes up 23-million acres in northern Alaska, and was set aside in 1923 as a petroleum source for the Navy. For years, it remained relatively undeveloped, but recently, oil companies have started showing an interest in the oil-rich region. Host Steve Curwood talks with Alaska Public Radio’s Joel Southern about a new proposal by the Bush Administration to open up the reserve to oil development.

CURWOOD: Welcome to Living on Earth. I'm Steve Curwood. The National Petroleum Reserve lies just west of the Arctic National Wildlife Refuge, on the oil-rich north slope of Alaska. Debates over drilling in the Arctic Refuge have gotten a lot of attention, but little notice has been given to a recent proposal by the Bush administration to sell oil leases on some of the most environmentally sensitive parts of the lesser-known petroleum reserve. Joel Southern is the Washington, D.C. correspondent for Alaska Public Radio. He joins me now to talk about the landscape of the Petroleum Reserve and the prospects of increased oil drilling in that area. Joel, first tell me how was the National Petroleum Reserve-Alaska, or NPR-A, first set up, and why?

SOUTHERN: Well, this area, which is roughly about 23.7 million acres, was first explored by government geologists for its oil and gas potential in the early years of the 20th century. And in 1923, President Warren Harding used an executive order to make it a Naval Petroleum Reserve. It stayed in that status for about 50 years, until it was renamed the National Petroleum Reserve-Alaska in 1976.

CURWOOD: So far, how has the Reserve lived up to its intended purpose?

SOUTHERN: Well, it just sat there for decades virtually untouched by the industry, because the type of oil there and the distance it was from Prudhoe Bay made it uneconomic for the industry to touch. And only now are we starting to see the initial production from the leasing that the Clinton administration initiated in 1998, around five years ago.

CURWOOD: Now where exactly in this National Petroleum Reserve are the most oil-rich regions and how much oil is there? What could this reserve yield?

SOUTHERN: Most of the oil potential is in a crescent of geologically oil-rich structures that run roughly parallel to, but inland from, the Arctic Ocean coastline. In terms of technically recoverable oil, the range is from 5.9 billion to 13.2 billion barrels, with a mean of 9.3 billion barrels.

CURWOOD: How does that compare with what's at the Arctic National Wildlife Refuge, in ANWR?

SOUTHERN: Well, the mean in ANWR is estimated to be around 10 billion barrels of oil, a range of anywhere from around – I think it's around 5 billion to 16 billion in terms of technically recoverable. So it's almost on par, but a little bit less.

CURWOOD: How interested do you think the oil industry is in the National Petroleum Reserve versus ANWR?

SOUTHERN: Well, they haven't been that much interested in it recently because nobody was interested in it for a long time. I think people just thought not much was going to happen there. However, the area got onto the radar screens of several environmental groups when the Clinton administration began the process of offering leases there about five years ago. But they wanted to balance those off with strong protections for, especially, migratory birds, other animal species, marine mammals, and also Alaska native subsistence hunting and fishing resources.

There's an area up there in particular called Teshekpuk Lake, which was in the initial planning area that was started back in the Clinton administration. Now, the Bush administration wants to go back and look at some of the restrictions and prohibitions that were put on Teshekpuk Lake, possibly modify or even lift some of those restrictions and allow more leasing in that area. And, in fact, some people would argue some of the values of the National Petroleum Reserve-Alaska are on par or perhaps exceed the biological values of the Arctic Refuge coastal plain.

CURWOOD: Tell me what it looks like. You've been to this National Petroleum Reserve. What do you see?

SOUTHERN: Well, it's a huge, vast plain that's dotted with lakes and ponds and pools of water. And there are these rivers that just roll across the landscape like – at one point I thought of them as unspooled ribbon. They just wind all over the place. And when you look down on the land itself, you'll see these hexagonal shapes where the permafrost cracks. It looks like a big tortoise shell pattern all over this coastal plain area. 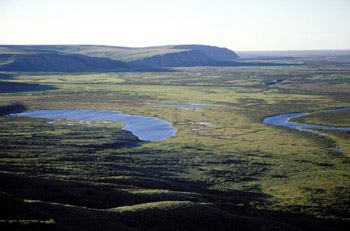 CURWOOD: Now what action have the oil companies taken in response to the environmental concerns regarding drilling in the Petroleum Reserve?

SOUTHERN: Well, they've learned that to try to cut down on the flak that they get about developing in the arctic areas that they have to do certain things. So most of the exploration, the exploration is now limited to winter months. They use things like ice roads to minimize the impact on the tundra. And, also, as you look at the evolution of oil technology on the North Slope, you can see that things are much smaller now than they used to be. They're that way for economic reasons, and they're also there to minimize the environmental impact. 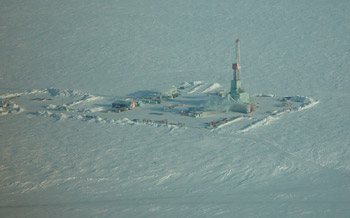 CURWOOD: So looking ahead, what kind of leases do you think the Bush administration is contemplating granting here, and how might that affect the environment in the National Petroleum Reserve?

SOUTHERN: I think if the Bush administration does go ahead with leasing, it's going to go with the alternatives that lease as much land as possible. There's one alternative they have now laid out on the table that would essentially lease 100 percent of this northwest planning area. Another one would lease 96 percent of it, but in that would be 100 percent of where there's the most oil and gas potential. This administration is very intent on increasing the oil and gas production from the United States to cut the dependence on foreign imports. They're not going to forfeit a chance to get more oil and gas from the NPR-A.

CURWOOD: Joe Southern is the Washington correspondent for Alaska Public Radio. Joel, thanks for speaking with me today.

SOUTHERN: Thank you, Steve. Good to be with you.


Slide Show of Photos from NPR-A