There’s been growing evidence that perchlorate, a main component of rocket fuel, may be concentrating in drinking water and lettuce. Meanwhile, the Bush administration has issued a gag order to keep EPA scientists from talking about their perchlorate research. Host Steve Curwood talks with Wall Street Journal reporter Peter Waldman, who has been following the story.

CURWOOD: It’s Living on Earth. I’m Steve Curwood. There is increasing evidence from government and private studies that the rocket fuel perchlorate may be contaminating lettuce and other food crops. This news follows earlier reports that perchlorate has tainted major sources of drinking water, especially in the west.

The stakes are high for two reasons. One, perchlorate is known to disrupt prenatal thyroid development, which can lead to brain damage. Two, perchlorate is found at hundreds of sites where rockets were built or tested. And the government and its contractors could be held responsible for cleaning up the pollution, as well as any illnesses and damage linked to it.

The Bush administration recently issued a gag order to keep EPA scientists from talking about their perchlorate research. Joining me now is Peter Waldman who’s been tracking this story for The Wall Street Journal. Welcome, Peter.

CURWOOD: Peter, you’ve reported now on two studies that look to see whether perchlorate was being taken up in the leaves of lettuce. One is an EPA study and is near completion. Tell us about these newest studies. What did they find?

WALDMAN: Well, the latest one came out on Monday. And it was performed by a non-profit environmental group called The Environmental Working Group. Basically, it found that a small sample of lettuce bought in supermarkets in the San Francisco Bay Area contained high levels of perchlorate. And these samples were taken from supermarkets in January and February. Nearly 90 percent of winter lettuce throughout the country comes from Arizona and Southern California from the desert regions where it is irrigated with Colorado River water, which we know is contaminated with perchlorate.

CURWOOD: And, what’s in the EPA study that’s not quite released.

WALDMAN: The EPA study, which hasn’t been published, but has been peer reviewed, and is well along that process, was a greenhouse study, essentially an experiment in which they grew lettuce heads in greenhouse conditions, irrigated with water containing perchlorate. And, they found that it took up the perchlorate from the water and actually concentrated it, meaning there was more perchlorate in the leaves per weight than in the water that was irrigating it.

CURWOOD: Now, no one is saying that these studies are conclusive, Peter. But, what do we know about concentrations at these levels?

WALDMAN: The health effects of perchlorate are still being very hotly debated. The EPA, in its reference dose, said that one part per billion of perchlorate is the safe dose for drinking water. And now that’s just a recommendation and is now headed to the National Academy of Sciences for more review.

As far as what the EPA recommendation means, basically, they’re primarily concerned with the developing organisms. What perchlorate does is interfere with the normal production of thyroid hormones, so that babies who rely on the hormonal system to trigger development, and particularly brain development--that’s the primary concern-- would not have ample supply of thyroid to develop properly. 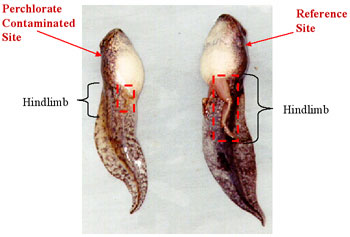 Perchorate effects on hindlimbs of tadpoles
Perchlorate has been found at high levels at many former defense sites. Dr. James Carr collected these tadpoles at a nine parts per million site in East Texas.
(Photo: Texas Tech University)

CURWOOD: Why is it taking so long to get full Federal regulations along these lines?

WALDMAN: In this case, you have a very powerful vested interest on the other side of the EPA here. And that is the Department of Defense. And their contractors, the defense industries, potential liability for perchlorate contamination in the United States ranges into several billion dollars, depending on where the standard is ultimately set. So, they are vying vigorously with the EPA over where that standard comes down.

CURWOOD: The staff of the EPA are saying one part per billion for drinking water. What does the Defense Department say?

WALDMAN: They’re saying that, according to their reading of the studies, the rat studies and a very few epidemiological studies, levels as high as 200 parts per billion would be safe for the human population. They essentially don’t believe that the uncertainty factors that the EPA scientists have applied are necessary.

CURWOOD: Now, the Bush Administration has put this gag order on employees of the Environmental Protection Agency. What do the EPA officials-- what do they tell you? And what have you learned yourself about the reasons behind this gag order on the EPA scientists?

WALDMAN: Well, as one can assume from what I’ve been saying, this is a politically hot topic. A very powerful Senator from Oklahoma, James Inhoff, a Republican who chairs the Environment Committee of the Senate has weighed in on behalf of industry. In Oklahoma, by the way, is Kerr-Magee Corporation which owned, at one time, a very, very large perchlorate factory outside of Las Vegas, which is the main source of the perchlorate that got in the Colorado River.

And, the White House and Office of Management and Budget have said hey, this is so hot between the EPA and Defense Department, we need another arbiter. So, the way they do that, in all cases of scientific dispute like this, is to refer to the National Academy of Sciences. While it’s being reviewed there, which could take as much as another year and a half or so, the EPA has instructed its scientists and regulators not to talk about it anymore, which struck me as something of a surprise because several scientists and regulators at the EPA have openly discussed perchlorate with me, on the record, in our newspaper going back six months.

And, when I called them on Friday to talk about these lettuce studies, they said, sorry, can’t happen anymore. And I called the spokeswoman of the EPA. And she said, yeah, we are not talking about perchlorate pending the National Academy of Sciences study.

CURWOOD: How common is it to have a gag order like this?

WALDMAN: This is pretty unusual. And, indeed, one EPA person did say they hadn’t experienced this in 20 some odd years in the agency.

CURWOOD: Peter, California has a special law--I think it’s called Proposition 65--that says that all products known to cause reproductive toxicity must be labeled. As I understand it, the Prop 65 authorities may well be speeding up their review of perchlorate since the Colorado River that brings water into the state is known to contain it. Could the water itself be labeled in California, do you think?

WALDMAN: Well, it’s quite possible. The California Environmental Protection Agency’s Office of Environmental Health Hazard Assessment has begun an expedited review of perchlorate to see if it would fall under the requirements. And, it is possible, after that, bottled water that contains perchlorate will have to be labeled.

CURWOOD: What about lettuce?

WALDMAN: That’s a good question. I would think that, given the broadness of Prop 65, it would also need such labeling. And it’s not just lettuce, by the way. Those are where the early studies are. But, all leafy vegetables that are grown with water contaminated with perchlorate are likely to have some in the leaves. So, a lot of the winter vegetable crop of this country is grown with Colorado River water.

CURWOOD: Peter Waldman is a reporter for The Wall Street Journal. Peter, thanks for speaking with me today.

WALDMAN: Good to be here, Steve.