Don Genova reports the controversy over salmon raised in ocean pens in British Columbia has grown beyond environmentalists and Native tribes to researchers and, now, consumers. Restaurants are changing their menus and the debate is spreading south into the United States.

CURWOOD: Much of the fresh salmon at your local seafood counter comes from fish raised in ocean pens. On the one hand, the notion of fish farming is appealing at a time when the ocean’s wild fisheries are in sharp decline. But, critics say salmon farms contaminate the ocean floor and produce a product that may not be as healthy to eat as wild salmon.

In Seattle, recent lawsuits target grocery stores for not disclosing that farmed salmon contain pink dye to make them look more appealing. But it is in British Columbia where tension over farmed salmon are strongest right now in the wake of the government’s recent decision to lift a moratorium on building new fish farms. Don Genova has our report.

GENOVA: British Columbia’s farmed salmon industry has been under attack for more than a decade. After rapid growth in the 1980’s, by the mid-‘90s, the provincial government had slapped a moratorium on additional farms. At issue were concerns the farmed salmon could pass parasites or diseases onto wild salmon, that the salmon pens created a massive untreated sewage on the ocean floor, and that farmed Atlantic salmon would escape, breed and crowd out their Pacific cousins.

The government lifted that moratorium last September. Opponents in turn have ratcheted up their campaign. A few weeks ago, they descended on a salmon farm in BC’s remote Browten Archipelago. 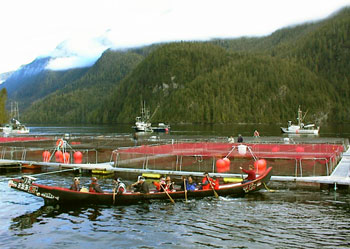 [SPEAKING AT A PROTEST]

GENOVA: Chief Bill Cranmer of the Numgis First Nation called on other native bands in the area to support closing the farms and end any involvement they have with salmon agriculture. In December, protestors destroyed part of a farmed salmon hatchery. Suspected vandalism has cost companies thousands of dollars in escaped fish and damaged net pens. Many commercial fishermen have also joined the movement.

Ritchie Shaw made a two-day journey to the Archipelago. He’s trying to protect a pink salmon run he’s fished for years.

SHAW: They’ve got some serious issues with disease, with lice. What they’re doing is they’re lousing up a perfectly good wild stock that we’ve had here forever. And, we don’t know why. Like what’s the reason for it? That’s what we want to know. We’d like them out of here.

GENOVA: Government regulators believe the sea lice infecting the farmed salmon in the Broughton Archipelago may be a threat to migrating wild salmon. So, some of the farms are shutting down for the time being. But they’re not leaving. Dr. Ted Needham speaks for Heritage Aquaculture, one of the companies affected.

NEEDHAM: There’s no question. We’re feeling our way. And if we are doing any harm to wild stocks, there must be appropriate regulation to prevent us doing so. And this is why we have followed a huge area of the Broughton to allow the next lot of out-migrating pinks, we hope, come out without threat.

GENOVA: Until recently, most of the protests against farmed salmon targeted the governments regulating the industry. Now, the message is being taken to people who eat the fish.

GENOVA: Activists at the forum called for a farmed salmon consumer boycott. Kate Dugas speaks for the Living Ocean Society and is part of the Farmed and Dangerous Campaign, developed by a coalition of organizations pushing for aquaculture reform.

DUGAS: Don’t buy farmed salmon. The environmental impacts, I think, of farmed salmon or of the industry are huge. They are really, really dangerous on the marine environment, and really need to be reformed.

GENOVA: Along with the environmental message, Farmed and Dangerous representatives claim farmed salmon isn’t healthy to eat. For example, they say it has 200 percent more saturated fat than wild salmon. But that’s not the whole picture, according to Dr. Charlie Santerre, an environmental toxicologist and food scientist at Purdue University in Indiana.

SANTERRE: It’s true that farmed fish tend to be higher in saturated fat. Although, the part that they’re not telling us is that the amount of saturated fat in the fish is still lower than many other meats, like pork or beef.

SANTERRE: Now, that claim is patently wrong. If you go to the U.S. Department of Agricultural website, and where you can check on the fat content of various foods, and we did a comparison between farmed and wild Coho salmon, farmed and wild Atlantic salmon, and farmed and wild rainbow trout. And in each of these cases, the amount of the long chain omega-3 fatty acids, the EPA and DHA was higher in the farmed versus the wild.

GENOVA: Perhaps most disturbing, the Farmed and Dangerous campaign is distributing flyers that claim farmed salmon contain unhealthy levels of PCBs. PCBs accumulate in fatty tissue and are linked to neurological and immune problems in children. Farmed salmon critics cite a preliminary study by geneticist, Michael Easton, published in the journal Chemosphere. Easton looked at the fish pellets fed to farmed salmon. And he also compared farmed salmon to wild.

EASTON: We found considerably higher level of PCBs in the salmon feed and in the farmed salmon than we found in the wild salmon that we examined.

GENOVA: Using PCB limits established by the World Health Organization, which are much stricter than the Food and Drug Administration, Easton found that a lightweight adult should eat no more than two servings of farmed salmon per week.

GENOVA: But this study had an extremely small sample size. Easton analyzed only four farmed and four wild salmon. He is now seeking funds for a far larger study. His study is also criticized for having been funded by an environmental organization.

SANTERRE: My biggest concern was that they were driving our sensitive populations away from an excellent fish. Farmed salmon is the fish of choice for pregnant, nursing women and children. But by scaring people away from salmon, consumers would go to a more contaminated, less nutritious fish. And that would include swordfish, shark, and king mackerel.

GENOVA: While Santerre tries to set the record straight with his point of view, all the negative messages about farmed salmon are getting through to consumers. And they’re speaking out.

GENOVA: Milestones is a chain of upscale casual restaurants in BC, Ontario and Washington state. At lunchtime, this Vancouver location is busy. But it’s not farmed salmon on the grill. Cathy Tostenson, marketing director for Milestones, says customer complaints have pushed it off the menu of all 23 restaurants in the chain.

TOSTENSON: We would have our guests ask our servers what type of salmon we would be selling. And, when they found out it was farmed salmon, they would often- times elect to make a different choice. So, there’s no question you can’t open up a newspaper, listen to a radio, or listen to the television without having a discussion taking place on these farmed salmon.

GENOVA: After ten years of serving farmed salmon, Milestones is switching to wild, using frozen product until fresh catches are available later this year. Days after the Milestones announcement, the Spectra Restaurant group made a similar announcement, affecting its 29 Pacific Northwest restaurants. Another major Canadian restaurant chain, The Keg, is considering the same move.

The loss of business will hardly cripple the Canadian aquaculture industry. Demand for affordable salmon is still growing. And Canadian production alone is worth over $300 million dollars a year. For Living on Earth, I’m Don Genova in Vancouver.