Oregon Land Use, Thirty Years On

Thirty years ago, Oregon developed the nation's first blueprint for controlled growth. It was a heated public dialogue, the talk of the state for years. Reporter Robin White looks back at those heady days and at why an increasing number of Oregonians are now dissatisfied with their plan.

CURWOOD: It's Living on Earth, I'm Steve Curwood. Thirty years ago this month, the people of Oregon took part in a far-reaching debate over how their state should look in the future. They decided to protect farmland and open space and stop cities from sprawling out across the land. Oregon's land use laws became a beacon for urban planners around the world and remains so today. But as Robin White reports, some Oregonians are now questioning their own rules.

MALE: I'll have a decaf latte, please. A sixteen ounce.

WHITE: By now, in any other western state the town of Sandy would have spread far enough to shake hands with the towns next door. But Sandy, Oregon is still a compact town of 5,000.

MORRISON: It's a small town. You have your normal good people, rotten people, rednecks, hicks.

WHITE: Becky Morrison runs the one espresso hut in Sandy. She was born here.

MORRISON: I'd like it to stay small, little Sandy.

WHITE: And it may, even though it's a developer's dream. It's 40 minutes from Portland and only 25 minutes from powder skiing on Mt. Hood. But it doesn't have acres of modern homes for Portland commuters and the downtown has stayed a diverse collection of old wooden houses with gardens a few little stores. Barbara Bernstein now lives in Portland but she's been watching Sandy.

BERNSTEIN: It doesn't look all that different than it did 25 years ago when I used to live here. And the reason why this town looks this way, and has the integrity it has, and hasn't become swallowed up in a suburban sprawl is because of the Urban Growth Boundary. 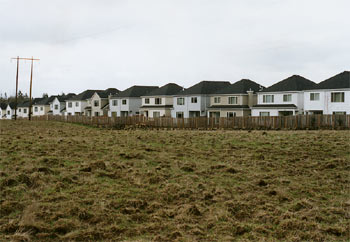 WHITE: The Urban Growth Boundary. Now in use from California to Tennessee, it was a brand new idea in Oregon in the 1970s. Each town drew a ring around itself and agreed to keep development inside the line. Towns would become denser towns and fields would stay fields. The Oregon planning process controlled sprawl, preserved natural beauty, and became almost a religion.

BERNSTEIN: I think people really understand it, and it has made a major difference in the development patterns in Oregon.

WHITE: The program started with a determined Governor, Tom McCall. McCall adored Oregon's mountains and fields and was passionate about it's farming way of life. He called sprawl a pox on the landscape. At a time when the remote corners of the west were filling up with a new influx of people, McCall mobilized Oregonians.

MCCALL: There is a shameless threat in our environment, and of the whole quality of our life, and that is the unfettered despoiling of our land. Sagegrass subdivisions, coastal condominia, and the ravenous rampage of suburbia here in the Willamette Valley, all threaten to mar Oregon's status as the environmental model of this nation.

WHITE: Rapid growth in California was spilling over into Oregon. Oregonians' distaste gave rise to a new word, "Californication." Governor McCall famously invited people to visit Oregon but asked them not to stay. McCall, a Democrat, was joined in his campaign by Republican State Senator and farmer, Hector McPherson. McPherson farmed then and still lives in the flat, grassy meadows outside Albany, in the Willamette Valley.

MCPHERSON: I was a dairy farmer and I saw the subdivisions creeping out from the city, up to where they looked to me like I'd be surrounded if I didn't do something. And I knew that they wouldn't be too happy with the odor, and the flies, and the various things that I did. So I thought, this is a place where we ought to have zoning to protect me and to keep them away at a reasonable distance.

WHITE: McPherson wrote a bill putting these ideas into law, and a powerful new planning division was born. Its first act was to find out why Oregonians loved their state, and what they wanted it to look like. Arnold Cogan led a rolling statewide survey.

COGAN: We outfitted the vans with all the equipment that you need, everything from masking tape and tacks, and felt pens, and easels, and newsprint, and all that stuff, and we hit the road. And we scheduled three rounds of 35 meetings each round.

WHITE: The entire state took part in the discussion, a black and white documentary film caught the spirit of the moment.

FEMALE: What should be done for the future? How about machine gun nests of the borders?

MALE 1: They're coming here because of the open space and all the things that we have, a lack of pollution. But if we have a tremendous influx of people, we're going to end up with all the problems that they had wherever they came from, aren't we?

MALE 2: So, it sounds to me like what I hear you're saying is that we want to plan it so that we've got a balance between timber, agriculture, and people.

WHITE: A majority of Oregonians got behind the planning goals. They didn't stop the influx of Californians, but they did preserve farm and timberland, and stop sprawl. Now, compared to suburbs in other states, Oregon's new houses and apartments are tightly clustered, eating up less land. Orenco Station, west of Portland, is the epitome--compact houses, walkable streets, a light rail station, and a brand new Starbucks.

WHITE: Physician Pat Dunn and his partner moved here from a larger house in another part of Portland.

DUNN: When we have to walk down to get our mail--which should take about 10 minutes to go there and 10 minutes back--it usually takes us about an hour because we're pleasingly forced to interact with our neighbors in our community. We can't get out without running into somebody and catching up with them about how their lives are going.

WHITE: The majority of Oregonians live in the city of Portland, which grew 22 percent in the 1990s. Many people say they're happy with how Portland's been shaped. But an increasingly vocal group in the south and east of Oregon are challenging the one size fits all approach to the state's land use.

WHITE: Far to the east of Portland, the town of Pendleton doesn’t have a Starbucks. You approach across miles of flat, high sagebrush deserts. It's wheat and cattle country, and the home of the Pendleton shirts. It's also the home of Gordon Smith, one of Oregon's U.S. senators.
After a Town Hall Meeting with constituents, Smith, a Republican, called on planners to be more flexible.

WHITE: Oregon's regulations can make it expensive to develop housing and businesses in this depressed area. For example, it would be more affordable for homeowners to build further out and to put in septic tanks and wells. But the planning laws force new homes to be connected to city sewers and water lines.

Just west of Pendleton, on the outskirts of Umatilla, Clyde Noble is pacing on top of a small volcanic butte. It's part of a lot he inherited from his father.

NOBLE: This desert we're standing on is about 100 acres that has no water route, and has never been farmed. This high desert, as you see, is just not suitable for farming. There's blockout crops all over.

WHITE: Noble wants to subdivide some of the land into four-acre parcels to be able to build houses for each of his children. But Noble is up against the Oregon planning bureaucracy. Even though he's within the urban growth boundary, it's zoned for farming only. The city of Umatilla asked the DLCD, the Department of Land Conservation and Development in Portland to rezone the land so that Noble could build the houses.

NOBLE: But the DLCD, out on the other side of the mountain, over in Portland, those people are always trying to tell us over on this side of the mountain how to live. They're the ones that are saying, no, we recommend you keep it in large lot sizes. And the reason they're doing this, they're just trying to get people to go live in the city.

WHITE: It's an example of what some call the fundamentalism of Oregon's planning process. Critics say Oregon's planners treat agricultural land as sacrosanct, even with the well-being of farmers and their families is put at risk.

CHARLES: As long as your ox isn't getting gored, it's a nice deal.

WHITE: John Charles is a free market environmental analyst for the Cascade Policy Institute. He says preserving agricultural land is not the issue.

CHARLES: I would like planners to admit that that is a hoax. What it's about is an aesthetic preference that many of the intellectuals in the state have to have people live in dense urban centers, and to have vast green spaces around them.

WHITE: Many people now question Oregon's planning system. Three years ago, the voters approved a ballot measure to compensate landowners for loss of value due to planning laws. Measure 7 was overturned, but a new bill dubbed the Son of 7 is much alive. If it passes, it will effectively gut the Oregon planning system. Even insiders say the system needs to change.

Arnold Cogan, who lead the survey in 1974, says the program has become Byzantine.

COGAN: It's become out of reach for a lot of people. And we planners are at fault for that.

WHITE: Cogan says it's probably time to reinvolve the public and maybe have different rules for different regions of Oregon. Many are concerned that the state could lose its unique planning vision altogether, and the world could lose an example of how to grow and preserve landscape.