Recent surveys and studies describe the impact of humans on the world's oceans. Some scientists, conservationists and the privately-funded Pew Oceans Commission are calling for a shift toward policy based on ocean ecosystem health. Living on Earth’s Ingrid Lobet reports from Baja, California.

Many people have their view of the ocean shaped by beach vacations and environmental campaigns that target individual marine species: whales, sea turtles, coral reefs. Now, a number of marine experts are looking at ocean health as a whole. A comprehensive Federal Oceans Commission report is due out this fall, and the privately funded Pew Oceans Commission has just released a report calling for a dramatic shift in the way oceans are managed. Living on Earth’s Ingrid Lobet reports from Baja, California where a group of marine experts recently met to chart a course in global ocean repair.

LOBET: Many people opened newspapers recently to this news: that 90% percent of the large fish in the seemingly endless ocean are gone, fished out. Marine ecologist Ransom Myers spent three years buried in Japanese fishing records for the study, which was published in the journal Nature, but he still finds hope.

MYERS: We still have a hint of what existed in the ocean, and we have time now to save them. Where we can’t bring back the mastodons and the giant ground sloths, we have to preliminarily change the way we approach the ocean. It is simply to say: look, we are going to exploit the ocean such that we don’t drive any component extinct. And that is a very simple rule, and it is not that hard to do.

LOBET: That the ocean could be in distress may strain the imagination, yet a new report by the privately funded Pew Oceans Commission termed the seas “finite and fragile.” Vice Admiral Roger Rufe is one of the Pew Commission members and president of the Ocean Conservancy.

RUFE: The science and the evidence is clear and compelling that our oceans are in poor health.

LOBET: The Pew Commission calls for a new all-ocean federal agency that would absorb the National Oceanic and Atmospheric Administration, and be on a par with the Environmental Protection Agency.

RUFE: It would be an independent agency that operates as EPA does, and has a voice at the cabinet level and direct access to the president.

LOBET: The Pew Oceans Commission also recommends taking control over commercial fishing limits away from regional fishery councils. A new National Ocean Policy Act with conservation, not employment or profit, as its priority would guide how many fish to catch.

And there’s more. As larger fishing trawlers with pinpointing sonar and bottom-raking gear have moved deeper into the high seas, they have been free to go where the chase leads. That, too, would change.

RUFE: It is time to zone the oceans so that really destructive practices that are going on now would be forbidden in many of the areas of the ocean, unless the resource extractor could demonstrate that the activity was not going to be destructive to the ocean ecosystems.

LOBET: Besides zoning the ocean to limit fishing, oil and gas activity, Congress would make a network of marine protected areas, something akin to the national parks. But at the Baja, California meeting, the conservationists and scientists went still further, calling for a global network of no-take zones that would rope off significant reaches of ocean.

Callum Roberts is a marine biologist at England’s University of York.

ROBERTS: Scientific lines of evidence are converging on a recommendation to protect something like 30 percent of the world’s oceans from all fishing.

Martin Hall of the Inter-American Tropical Tuna Commission shrugged off the sweeping plan to limit fishing.

HALL: The ideas that I don’t think are politically practical usually don’t scare you. I don’t see the world becoming less interested in fish protein. I don’t see that happening.

LOBET: Yet Hall believes the fishing industry does need new gear designed by young engineers with a concern for conservation.

Polls show many Americans still believe oil tanker spills are the worst hazard facing the sea, when, in fact, most ocean pollution comes from land, from fertilizer runoff, discharged sewage, and millions of gallons of leaked motor oil. But there may soon be a new public campaign about the sea from conservation groups. And its poster child may be a little-noticed map feature called sea mounts.

Undersea mountains turn out to be teeming with life that thrives nowhere else: corals, sponges, as well as less television-friendly creatures. Biologist Karen Stocks at the San Diego Supercomputer Center says more than a third of the life found on sea mounts is new to science.

STOCKS: And when you look at sea mounts separated by ridges of about a thousand kilometers, they share just four percent of their species. So not only do sea mounts as a whole support unique communities, each sea mount is potentially a pool of undiscovered species in the oceans.

LOBET: Stocks built a database of some 30,000 sea mounts worldwide. All of them have already been fished, but several conservation groups believe they could still be a good subject for a global campaign for marine protected areas on the high seas. 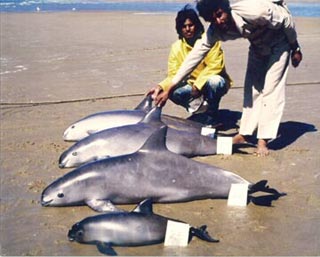 The world's smallest porpoise, the vaquita (Phocoena sinus),
is a critically endangered species restricted to
the upper Gulf of California. The vaquita is rarely seen.
(Photo: ©Conservation International/Alejandro Robles)

LOBET: A short distance away from where the conservationists and scientists met, a small Mexican fishing village was celebrating the Day of the Mariner, a tribute to lives spent and lives lost in the chase for marlin, swordfish and shark.

LOBET: Francisco Rosales, 63, has been fishing since he was 14 and he is one of the few here who can remember the giant gulf grouper when it was abundant. But he says you have to go really far to catch even little fish these days.

LOBET: Told about the nearby conference, he says they should have come years ago. He worries they are too late. But conservationists and some researchers are hopeful that a flood of new knowledge, and the ability to instantly map it and make it visual, gives the world a chance it has never had to grasp and perhaps protect the richness of the ocean.

For Living on Earth, I am Ingrid Lobet in southern Baja, California.