The slow food movement began over a decade ago as a response to a plan to build a McDonald’s in Rome. The international organization promotes locally grown, unprocessed food, and taking time to eat with family and friends. Pippin Ross attended a slow food event in Brooklyn, New York and has our report.

CURWOOD: McDonald’s may be the undisputed purveyor of fast food but it’s unwittingly responsible for spawning what’s known as the Slow Food movement. Slow Food is a worldwide association that promotes a return to food that’s unprocessed, grown locally, and eaten at leisure with family and friends. It’s all part of a trend that has made natural foods the fastest growing segment of the industry. Reporter Pippin Ross visited a recent Slow Food event held in Brooklyn, New York and has this report.

ROSS: Okay, so it’s kind of a no-brainer that the opposite of fast food would be slow. But just what does that mean and why are there 70,000 dues-paying Slow Food members in 45 countries? Patrick Martins, the U.S. director of Slow Food, sits on the back of a tractor trailer truck in a gritty, industrial neighborhood in Brooklyn.

MARTINS: Slow food was founded very much on the pleasure component. I saw this great bumper sticker in Iowa that said “if I am what I eat, then I’m fast, cheap, and easy” and that’s one of the thing we’re trying to change too – that there won’t be as many people who live that bumper sticker.

ROSS: Slow food began as a protest to a plan, in 1986, to build a McDonald’s in Rome. Italian activists responded to what they saw as the globalization of fast food. Their strategy was to rally people to reject Big Macs in favor of food that’s local and naturally raised, and in so doing, support small farms.

ROSS: The operative word is indeed slow in this Brooklyn parking lot, where three, 120 pound pigs are splayed across giant charcoal grills to roast all night long in anticipation of tomorrow’s third annual Slow Food barbeque.

EASON: We’ll show you these over here, because they haven’t been cooking long.

ROSS: Bill Eason, a professional pig-cooker was recruited from North Carolina to grill the pigs. He says there’s nothing new about Slow Food.

EASON: Because unbeknown to me until I became familiarized with it--and a part of it--that’s what I was doin,’ cookin’ slow food, low and slow, not fast. So, you know, with that attitude, the Slow Food movement suits my way of thinkin’.

ROSS: The pigs, with gentle blue eyes and lean, muscular bodies, came all the way from Iowa. They were handpicked for this event by farmer Paul Willis because, he says, they were raised like pigs ought to be. 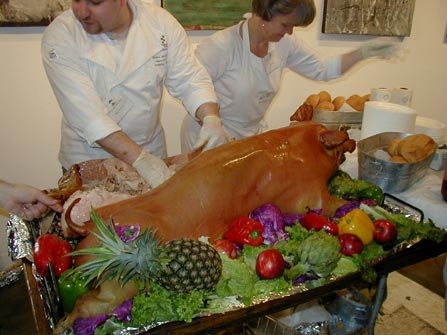 Roasted pig was the main dish at a recent Slow Food event
at the Brooklyn Brewery in New York.
(Photo: Robert Kelly)

WILLIS: Which means they’re, if you will, free range or outdoor raised. We don’t use antibiotics, and we try to focus on the natural inclinations of a pig and how a pig likes to live. So they have bedding and they run out in pasture and this type of thing.

ROSS: That back-to-basics upbringing is both sanctioned by the Animal Welfare Institute and central to the Slow Food ethos, as are things rooted in tradition. Like the copious amounts of beer that will flow during tomorrow’s event. Brooklyn Brewery manager Tom Grubs says micro-brew recipes—some dating back to the Egyptians—that use whole grains and avoid preservatives are a perfect fit with the Slow Food concept.

ROSS: Flavor, tradition, unprocessed food, and the chance to sit with friends and meet new ones inspired about 400 people to pay 85 bucks a head to show up the following day. The menu? Ribs, pulled pork, lamb sausage, baked beans, cornbread, cole slaw, and pickles, in celebration and support of farmers and businesses the Slow Food movement recognizes as purveyors of salt-of-the earth food. A marriage that Steve Goldberg, the director of Whole Foods Catering is loving, as he unloads a truck full of coleslaw and cornbread.

[SOUND OF FOOD BEING UNLOADED]

GOLDBERG: We started off as a small company with small stores and it was all about nurturing relationships with small producers, whether it was small farmers, artisan cheesemakers. And so for us, we’ve been doing this a long time and we love the fact that more and more and more and more people are getting involved in it.

ROSS: Case in point: Juan Sanchez, a recent convert to Slow Food, whose head is just about buried in a plate of ribs and beans.

SANCHEZ: Hmmmmm…it’s really tender, its really good. I always start with the ribs.

ROSS: The schedule of upcoming Slow Food events is as dense as it is international. This summer, New York’s Slow Food chapter will host seminars on—among other things— cooking grass fed beef and traditions in pickling. Hagen, Germany will be the site of a cherry harvest festival, and in Chicago, numerous chefs will serve food in art galleries to underscore the notion that food is art.