Scientists in Kyoto have discovered what may be behind the extraordinarily calming effects of Japanese Zen gardens. Host Steve Curwood discusses these findings with researcher Gert Van Tonder.

CURWOOD: Japanese zen gardens are landscaped with raked gravel and carefully placed rocks and moss. And although they look sparse and bare, these can have a strong calming effect, as I found out once when I visited the Ryoanji Zen Garden in Kyoto a few years ago.

VAN TONDER: I first thought I would just get a scattered pattern of lines going off into various directions. But it turns out that the medial access lines in the simulation form a converging pattern. And it converges onto the main viewing area of the veranda in the temple.

And this converging structure resembles a tree. We did a number of analyses on these branches. And, for example, we found that, if anybody would just randomly throw their rocks onto that piece of gravel, they wouldn’t nearly come close to finding such a nice converging tree structure.

VAN TONDER: Try to image to see a tree that’s invisible, except for its leaves. So, in a similar way, in the garden here, the rocks form the leaves of this invisible tree. And while you’re not necessarily aware of it, the branches and the trunk is right there in front of you. 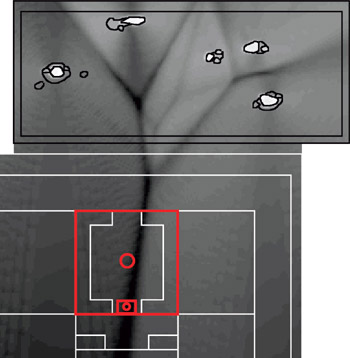 CURWOOD: How much do you think the designers of this garden were aware, or knew about, the subconscious picture that they were creating?

VAN TONDER: Well, I think we would be a bit reluctant to say that they consciously thought of a tree structure, and then went ahead with the design. But they must have had a very highly developed or sophisticated intuition of their own subconscious perception so that they could adjust the rocks and, thereby, also this invisible tree until it felt just right.

CURWOOD: How important is it for the calming effect that a tree is the image that’s implied?

VAN TONDER: Well, I think I can only answer with a puzzle. The image of a tree in Buddhism is important in the story about the moment when the Buddha finds enlightenment. And he does so at the foot of a tree. So, that could be a possible clue for people who want to think about this.

CURWOOD: Thanks for speaking with us today.