Living on the Fence Line - Part 1

When a man returns to his hometown on the Texas Gulf Coast, he's shocked at how dirty the air seems and begins organizing. Port Arthur is home to six of the 500 refineries and industrial plants on Texas's upper Gulf Coast. Independent producer Deepa Donde reports.

CURWOOD: People along the Texas-Louisiana Gulf Coast face some big challenges when it comes to sharing a neighborhood with industry. They live alongside the largest concentration of petrochemical plants and oil refineries in the nation. Some five hundred of these facilities run from Houston along the upper Gulf Coast. And unplanned releases of hazardous chemicals are frequent. These accidents have become a way of life for people who, as they call it, live on the fenceline. But not everyone accepts the status quo.

DONDE: Port Arthur, population 58,000, is at the far tip of the Texas coastal marshland, about 90 miles east of Houston. As you approach, signs for Spindletop, the first American oil gusher, and Janis Joplin’s hometown museum pop up on your left.

DONDE: Nearer still, plumes of white smoke rise from the treetop – the green wall between the highway and the gulf coast refineries. The plants seem hidden but they have been here since the oil boom at the turn of the 20th century. And so have generations of Port Arthur residents.

KELLEY: See the housing projects over there? That’s where I was born, right there and my grandmother used to walk from there all the way down what we call Dunt Road.

DONDE: Hilton Kelley recently came back to Port Arthur from Hollywood. He had plenty of work there, in film and television, and his Screen Actors Guild card is still current. Kelley says he always knew he wanted to inspire kids with his success. But when he did come back, what struck him was the air.

KELLEY: I grew up looking at an orange sky. I thought it was normal until I moved away, went to California and found out that hey, at night the sky didn’t have to be a bright glowing orange. You didn’t have to smell sulfur all day long.

DONDE: In a freshly pressed shirt and khaki linen shorts, Hilton Kelley stands before a barbed wire fence. It divides some thirty houses from a tank farm, dozens of smokestacks, and a maze of piping.

KELLEY: And you can see the refineries right there, bordering this community.

DONDE: At first, you smell something like burnt matches but then it sharpens. A rotten eggy odor lingers in the heat. Most folks here have gotten used to the smell, including Kelley. That is until he had a conversation with an elderly pastor.

KELLEY: He brought it to my attention by saying, “Son, I understand that you want to start a community center but do you understand how polluted this area really is?” And so he started to give me a breakdown as to really what this town was facing.

DONDE: For the past three years now, Kelley has been trying to persuade residents to organize and demand cleaner air. But he’s found it slow-going.

KELLEY: They don’t understand how these chemicals coming out of these plants – when they talk about so much was released in the upset – they don’t equate that with “Wow, I’m breathing this stuff in. This is why I’m coughing so much or this is why my eyes are constantly watering all day. “

DONDE: He points to the day’s paper.

KELLEY: Two nights ago, they just had a pipeline explosion. I heard it and everything – boom – it was so loud. See how orange the sky is right here? Here it is, front page. “Cause of explosion still under investigation. Natural gas pipeline ruptures.”

DONDE: And two days later, the details are still sketchy.

NEWSCASTER: Good morning everyone, I’m Andrea Bishop. Officials are still trying to figure out what caused that pipeline to leak and explode Tuesday night in Nederland.

DONDE: From June 2002 to June of 2003, there were three hundred and forty upsets or accidents in the Port Arthur area. Among these were fifty-six more serious chemical spills, fires, and explosions, releasing millions of pounds of toxic chemicals such as benzene, tuolene, and xylene.

Frustration over numbers like this have lead Hilton Kelley to seek support from experts, people like Neil Carman, who was an investigator for twelve years at the Texas agency that monitors air quality. What he saw made him angry, so he quit. And now, Carman leads the Lone Star Sierra Club.

CARMAN: Port Arthur is a particularly egregious situation because there are so many poor people of color who are living along the fence line of these large industrial plants, the refineries and the chemical plants. I have been down there on a series of trips over the last 10 to 12 years and it’s been a very frustrating situation.

DONDE: Of the six plants in Port Arthur, only Motiva agreed to speak to us. The Motiva refinery is co-owned by Shell and Saudi Arabian oil. Tracey McMinn is an advisor on government affairs for Shell Oil. She says Motiva has reduced emissions by ten percent. It has also invested $70 million dollars in improvements to the facility, following a consent decree with the federal government. Despite Motiva’s improvements and investments, a few months ago the plant had an upset.

MCMINN: We had an incident. We had a power failure is what happened.

DONDE: Losing power meant losing the steam that dilutes hazardous gases. So the plant had to release undiluted gases to avoid a buildup and explosion.

MCMINN: The wind direction took that smoke over into what’s called the El Vista neighborhood which is one of our neighboring communities over here.

DONDE: McMinn says that within thirty minutes of the upset, Motiva sent out a team of air monitors.

MCMINN: According to our monitors and according to screening levels there is no reason to be concerned. We did hold a community meeting in El Vista and the reason we did that is that we don’t want people to have concerns or issues or fears and feel like they can’t talk to us about it. And we want people to be informed of what’s happening over here because I think in many cases not having information is really when problems arise.

DONDE: Kelley, though, has been out gathering his own information with gear he keeps in the trunk of his car. 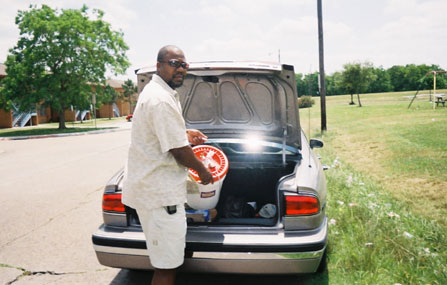 DONDE: Using a five-gallon plastic bucket with a vacuum-screw top, Kelley collects a sample in a clear teflon bag. Activists call this the bucket brigade. It’s part of a national grassroots initiative, the Refinery Reform Campaign, to arm citizens with information.

[SOUND OF MOTOR SHUTTING OFF]

DONDE: After he’s collected the sample, Kelley sends it to an independent laboratory in California.

KELLEY: Well, it finds out that there was a big release of benzene in that plume and it was right on this community – and I took the air samples, we got samples to prove it.

DONDE: Analysis of Kelley’s air sample showed levels of benzene that were not high, but were high enough, if sustained, to cause a greater incidence of cancers among residents. Tracey McMinn of Shell Oil stands by her results.

While some gulf coast companies, like Shell, have reduced emissions, others in Texas have been fined stiff penalties for increasing theirs. This May, the Texas attorney general fined Huntsman Petrochemical Corporation close to 9.5 million dollars for releasing more than sixteen million pounds of chemicals from its plant, a few miles from the fenceline. In a rare criminal trial, two of Huntsman’s plant managers were convicted of felonies for lying to the state and EPA. The two are appealing. But one thing is certain. More than thirty years after the passage of the Clean Air Act, many folks along the fenceline are still getting sick.

CURWOOD: Our story about air pollution and the community of Port Arthur, Texas will continue in just a minute. Stay tuned to Living on Earth.