Living on the Fence Line - Part 2

Producer Deepa Donde's report on efforts to clean up the air in Port Arthur Texas continues, as she visits long time residents who fear the air may be hurting their health.

CURWOOD: Welcome back to Living on Earth. I’m Steve Curwood.

Much of the nation's gasoline, fertilizer and plastics is manufactured along the southern Gulf Coast. Producer Deepa Donde continues her report now on the Texas community of Port Arthur. The town borders six chemical plants, and it's not uncommon for even young people to face a range of diseases, from respiratory illness to cancer.

DONDE: A few miles from the refineries, close to the tracks that used to separate black from white Port Arthur, Hilton Kelley waves to a small thin man at the corner.

KELLEY: How are you doing?

KELLEY: We are going to get out for a minute and meet and greet then we’re going to take a tour. Mr. Dominic this is Deepa.

DONDE: A veteran of World War II and Korea, Reverend Alfred Dominic still holds service on Sunday. He’s the pastor who inspired Hilton Kelley to advocate for clean air, and was one of Port Arthur’s first environmental activists.

DONDE: Reverend Dominic’s concerns for clean air stretch back to Jim Crow times. And he says it gives him peace to pass the torch to Hilton.

DOMINIC: But thank God for this young man. He didn’t, he didn’t wait for nothing; he got out there and saying what he had to say. See, I came up in an era from the 20s on now when they would not allow you to speak. If you would speak they would squash it out. But now, it’s coming to pass that people are speaking out regardless to who you are, what color you are, what country you are from. They are speaking out. And I praise the Lord for that.

DIXON: That’s Snoop Dog – some friends of mine give him to me. That’s the name they gave to him, Snoop Dog. You can’t be interviewed so might as well rest.

KELLEY: Did the German Shepherd every have any puppies?

DONDE: A picture of Martin Luther King Jr. hangs on his living room wall. But before we have a chance to say much, a young woman walks in to return a fishing pole. She stands cautiously by the door, smoothing her hair.

DIXON: There is a young lady right there – I don’t know if she wants to discuss it but you have a comment. We are on the subject of cancer and environment…hmmm…uterus.

KELLEY: Uterus, you got cancer in the uterus.

DIXON: In the uterus.

WILLIAMS: I just wake up every morning. I’ve got two kids to live for. I have a two-year-old, and I have a four-year-old. A four-year-old, a man. I can’t just lay down on my back and be like “oh well, I’m dying” or something. I just put it in God’s hands – whatever happens, happens. That’s why I don’t claim it all. Everybody has to go from something, so you know.

DONDE: Judy Williams is 21. You’d never know from her broad smile that this woman is a cancer survivor. She found out four years ago, a few weeks after she had her first baby. She thinks that there is something wrong with the air here. She can tell the difference when she drives into Houston, even though Houston has some of the worst air in the country.

WILLIAMS: The air is so different. I mean I’ll swear to living God. You pull into Houston, and it’s like “oh, I can breathe.” You know what I mean. When you get back home, it’s like oh my God, what happened? You can taste it, almost, when you hit the air. It’s in everything.

DONDE: Not a person I met here drinks the tap water. Everyone drinks either distilled or bottled water, including Judy.

WILLIAMS: Bottled water! Honey, you have no idea what’s in this water out here. I mean, people pollute…

DONDE: The mood suddenly shifts to more serious, as Hilton informs Judy about the latest and most forceful of the recent efforts to clean the air in Port Arthur: a class action lawsuit for damages against Premcor, Motiva, Chevron Phillips, Huntsman, BASF, and Atofina.

KELLEY: Because too many young people like yourself is dying from cancer. We just lost a 15-year-old last month, little girl. She had been living with brain tumors. She been having little small tumors all over her head, on the inside, on her brain. She died just last month.

WILLIAMS: Oh my God, who are you talking about?

WILLIAMS: I know who you are speaking of.

CARMAN: In a way, you could describe Port Arthur has a kind of Bhopal in slow motion.

CARMAN: People are being, slowly and systematically, poisoned on a daily basis. And while they may not die today or tomorrow from the insults – from the pollution – they will get cancers and leukemias and brain tumors and kidney failures and so forth from the pollution over the next 10, 15, 20 years.

DONDE: No one has ever conducted a comprehensive survey of Port Arthur’s air or associated health risks. A 1998 study conducted by the Texas Department of Health did show Port Arthur had levels of ozone, hydrogen sulfide, and benzene that suggested a “public health concern” and could pose a risk to the health of residents.

A local toxicologist recently conducted a symptom survey of residents in Port Arthur. More than seventy-five percent had ear/nose/throat problems, respiratory illnesses, muscle and bone diseases, compared to less than a quarter of those in a control group in Galveston.

DONDE: Our last stop is the home of Reverend Dominic’s daughter, Shaza Dominic Prince, a mother of three.

DONDE: When I enter, the first thing I notice on her kitchen counter are dozens of medicine bottles and a neatly stacked pile of prescriptions. Next to it lies a portable breathing machine, the kind you see in hospitals.

PRINCE: You clean this out with a little vinegar. We just put this solution, it’s already pre-mixed so we don’t need to add anything to this one, some of the solutions we have to add things…

DONDE: The nebulizer was a gift from her father to help her children cope with asthma attacks. Shaza herself suffers from chronic pain, earaches, and migraines. On average, she takes twenty pills a day to cope. And last year, the doctors told her she has a degenerative bone disease.

PRINCE: I think that the problem is stemming from a lot of the inhalation of different chemicals and what not that is causing it to deteriorate so fast. Now, it might have been caused by something else, I’m not saying the plant caused it, but I think the deterioration is caused by a lot of the chemicals I’m inhaling and digesting and whatever.

TEMISHA: My sinus and congestion and everything – well, it cleared up but when I moved back here about a month ago, I’ve been sick everyday.

PRINCE: You wanna show her a couple of hoops? He wants to be a basketball star, I think his cousin was one.

DONDE: Cullen is the one that Shaza spends her time worrying about most, because his asthma is the worst in the family.

PRINCE: I mean, the first couple years of his life he didn’t even know what the outside looked like, I don’t think. We couldn’t let him go out there, because every time he went outside he got sick. You know, it’s ridiculous.

DONDE: But tonight is a good night. And Cullen’s doing what he loves best, playing basketball. 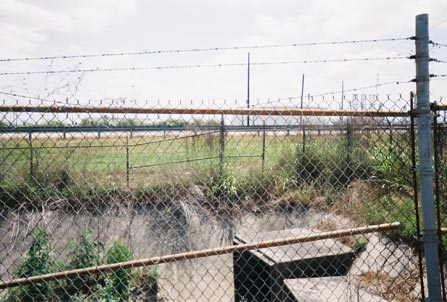 DONDE: There is a slight orange glow from the refinery across the street. They live at the last house on Foley, the closest to the fenceline. Cullen’s five-year old cousin Mariah runs circles around him.

DONDE: Mariah’s wide smile and carefree skip touches anyone who nears her. Shaza whispers that the child came to live with her, a year ago, just after her mom died of uterine cancer at the age of twenty-one.

Shaza has signed her family onto the class action lawsuit filed against the six plants that border her property. But some environmental advocates don’t believe a lawsuit can solve all Port Arthur’s problems. A few have argued for the relocation of Port Arthur residents. That’s what happened to a small group of residents in Norco, Louisiana, about two hundred and fifty miles from Port Arthur.

But many longtime residents like Shaza don’t want to relocate. She hopes that the refineries and petrochemical plants can simply do a better job.

[SOUNDS OF FAMILY OUTSIDE]

CULLEN: We want to pray for all the people here, Lord. We want to make sure they wake up tomorrow, Lord, and have another great day like today was. Forgive us for our sins and all the sins that other people have done, amen.