Who Let the Cats Out?

Cats are dear to many people, but perhaps just as many find them a nuisance. That’s because large numbers of stray and feral cats are running rampant in both rural and urban areas across the country. As Bruce Schimmel reports from Milton, Delaware, there’s a number of ways to thin the homeless cat population and some ways are more effective and popular than others.

GELLERMAN: It’s Living on Earth. I’m Bruce Gellerman, and coming up: Leo and Moopheus plot an escape from the virtual stockyard called “The Meatrix.” But first – America's most popular pet. Nope, not Fido. It’s Fluffy. Americans own some 70 million cats. But as the number of pets in homes has grown, in some places so has the population of cats without homes. Outdoor cats can be a nuisance to people but they can also carry disease and destroy wildlife. Scientists, health officials, and cat lovers are looking for humane and effective ways to decrease the numbers of homeless cats. But as Bruce Schimmel reports from Milton, Delaware, the felines, at least for now, appear to have the upper claw.

[SOUND OF CARS PASSING BY]

SCHIMMEL: On this small, tree-lined street in rural Delaware sits an old Victorian house which Joannie and her husband Jamie bought for their retirement. But soon after the couple moved in, they discovered their dream home was already partly occupied: by a colony of cats.

SCHIMMEL: Abandoned domestic cats from the neighborhood were breeding a generation of feral kitten, unsocialized cats that shun human contact. They were living underneath the floorboards.

JOANNIE: We noticed a very strong scent in the sunroom. And we put in new flooring, thinking maybe that would solve the problem. But it didn't ‘cause the cats could go under any layer of flooring and still make quite a smell.

SCHIMMEL: The couple tried sealing the house and surrounded their foundation with mothballs. Five years and many boxes of mothballs later, the colony of cats was gone and the smell has been replaced by another odor.

JOANNIE: We are living with the suggestion or hint of eau de mothballs almost all the time.

SCHIMMEL: Estimates of the number of stray and feral cats in the U.S. range widely, from 10 million to as many as 70 million. Scientists and advocates say the rise – or decline – of the homeless cat population varies with location, time of year, and the effectiveness of cat population control. But perhaps one thing most will agree on is that the large number of strays and ferals is a problem to be reckoned with.

SCHIMMEL: In her modest bungalow surrounded by cornfields, Stella Oakes houses about 25 cats. All of the cats Oakes cares for are neutered. Last year, she was taking care of many more. 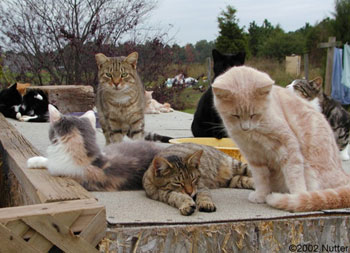 SCHIMMEL: Her own health failing, Oakes asked fellow cat-rescuers to relieve her of most of her animals. For years, Stella Oakes enjoyed her reputation as a Cat Lady, taking on animals nobody else wanted. But then, the dumping began.

OAKES: A woman got out of that car and had a carrier. And I seen her pick it up and shake it. She dumped out five baby kittens in a waterhole over there. It had rained the night before.

SCHIMMEL: Oakes believes that people dumped cats on her because they imagined it would be better than another alternative – taking them to the local animal shelter.

OAKES: I would rather see an animal put to sleep at the SPCA than dumped on a road to starve to death, or get run over.

SCHIMMEL: A few miles away, at the local SPCA, the number of cats coming through the door has been increasing steadily for the past several years.

LINKERHOF: Here's our reception area, this is where we do the intake.

SCHIMMEL: Lieutenant Gerry Linkerhof runs this state-funded animal shelter. The shelter lacks the funding to address the many complaints about feral and stray cats. Instead, says Linkerhof, several neighboring township hire private cat-catchers to bring in the felines.

LINKERHOF: As you can see, there's a gentleman bringing in a cat right now, in a trap.

SCHIMMEL: Cats living outdoors can carry disease, says Linkerhof, so the trapped ferals are segregated from domestic cats in the shelter. Feral cats are generally not sufficiently socialized to be suitable for adoption. The cats on public display here come almost entirely from homes.

LINKERHOF: As you can see, there's this nice little kitten in this cage here [MEOW] Very adoptable.

SCHIMMEL: But, even former housepets, if they're older, will not find new homes, says Linkerhof, pointing at an adult animal.

LINKERHOF: His chances, I'd say, are probably about ten percent chance – one in ten in making it out of here.

SCHIMMEL: Of the 2,900 domestic and feral cats brought to this shelter last year, some 90 percent were euthanized. According to the Humane Society of the U.S., there are no reliable national statistics for the number of cats euthanized yearly.

But while those numbers may be in the millions, some say they appear to be dropping. That's because many animal advocacy groups believe euthanasia is inhumane and may be unnecessary. Dr. Michael Stoskopf is a researcher at the North Carolina State University College of Veterinary Medicine. He says euthanizing ferals to reduce populations does not always work.

STOSKOPF: Cat species is a very pragmatic species. They will do what they have to do to survive. If that means coming nowhere near humans, keeping out of sight, hunting at night, that's what they'll do.

SCHIMMEL: Feral colonies that are thinned out by euthanasia, says Stotskopf, tend to attract new recruits. So, Stoskopf looked at another form of population control growing in popularity among some cat advocates - trapping, neutering and then returning feral cats back to their colonies. His study, which presented recently at an American Veterinary Medical Association Forum, followed over 2,000 cats over a period of six years.

STOSKOPF: All of the colonies where we had done some form of neutering on both the males and the females decreased in size and some of them had gone completely extinct within three years.

SCHIMMEL: But Stoskopf says that some colonies may never go extinct. His study concludes that trap, neuter and return is a viable means of controlling feral cats – but only if it's managed intensively. Others add that domestic cats, if not neutered, should be kept indoors, so that they don't exacerbate the problem.

SCHIMMEL: At the end of a long and unmarked dirt road is a no-kill sanctuary run by Sue Gonzalez. The Good Shepherd Cat Sanctuary is hard to find, says Gonzalez, and for a very good reason.

[SQUEAK OF A GATE LATCH]

SCHIMMEL: This sanctuary houses about 125 cats, and it's currently filled. Gonzalez says she can find homes for about 60, about half of her cats, every month. She and her volunteers offer neutered and inoculated cats for adoption at a nearby pet store every day. The other half of these abandoned cats will remain here permanently to live their lives out in the sanctuary.

GONZALES: You're in the trenches, day in and day out, seven days a week, so you better beware, because you're going to need more than love to run a cat sanctuary.

SCHIMMEL: Whether by no-kill sanctuaries, euthanasia, or managed feral colonies, cats without owners, says North Carolina state's Dr. Michael Stoskopf, will ultimately be treated according to the place they occupy in people's heads and hearts.

STOSKOPF: Cats are amazing animals. They're adaptive, extremely plastic. And depending on your perspective, they're either small gods, or they're invasive, introduced species who shouldn't be there.

SCHIMMEL: And almost all agree that if un-neutered cats continue to be abandoned or are allowed to roam freely, the number of homeless cats and their feral descendents will continue to multiply.

For Living on Earth, this is Bruce Schimmel in Milton, Delaware.