The Secret Life of Lead

Scientists are testing meconium, babies' first stools, to try to assess how much lead transfers from pregnant mothers to their fetuses. Cynthia Graber has the latest installment of the Living on Earth series, "The Secret Life of Lead."

CURWOOD: Lead is not only a problem in drinking water. Though lead paint in American homes was outlawed in the 1970s, it is still present in older homes, and it is still putting pregnant women and children at risk. For the past year, Living on Earth has been following the work of researchers who look at ways lead can affect children, including lowered IQ, impulse control problems, and juvenile delinquency. These scientists are examining the ways children might come in contact with lead in their homes, particularly when they’re toddlers. And there’s another question they hope to answer – how much lead passes from a pregnant mother to her fetus? Living on Earth’s Cynthia Graber has this latest installment in our series, “The Secret Life of Lead.”

CALLAHAN: Should we change your diaper? I know that’s not a problem. What’s the matter, huh?

GRABER: Stephanie Callahan sits in her living room and jiggles her newborn daughter Kylie Renee on her lap. Callahan and her 11-day-old baby are part of a three-year lead study run by Cincinnati Children’s Hospital and the University of Cincinnati. Scientists want to know how low levels of lead affect children, and figure out how to clean up the home environment.

In this part of the study, the researchers are trying to determine how much lead transfers from the mother to the baby in utero, and they’re hoping meconium can help them figure it out. Meconium is the greenish, tarry substance that makes up a baby’s first stools. It’s not actually fecal matter. Instead, it’s made up of bile, mucous, parts of the baby’s intestines as they hollow out, and substances from amniotic fluid.

As a new mom, Stephanie Callahan played a crucial role in this study, making sure her baby’s first dirty diapers didn’t end up in the hospital trash.

CALLAHAN: So, it was kind of weird. I felt awkward hitting the call button, not saying I need pain medicine, or I need this … Um, I got a dirty diaper, you need to come get it [LAUGHS].

GRABER: These dirty diapers, with up to a quarter cup of meconium, are now frozen and stored in Cincinnati. Once the first hundred mothers in the study give birth, the babies’ diapers will be sent to the Centers for Disease Control in Atlanta where the meconium will be analyzed. 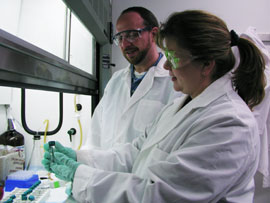 BARR: And since meconium starts accumulating in the bowels of the infant right around 12 to 14 weeks gestation, and it continues to accumulate throughout pregnancy, you’re theoretically getting everything that could possibly be deposited into that meconium over that period of time. And so, you perhaps can look at exposure over the last two trimesters of pregnancy.

[MECHANICAL BUZZING UP AND UNDER]

GRABER: The lab technician mixes the meconium with a blender-like instrument to make sure chemicals and cells are distributed evenly throughout the sample. Barr says the device is a miniature version of something you’d find in the kitchen.

BARR: A lot of the techniques we use in the laboratory are very analogous to cooking things.

GRABER: The technician carefully measures out a half gram of meconium and then adds a solvent, such as methanol or methylene chloride, which is designed to extract various chemicals from the substance.

BARR: If you were preparing a chicken stock, for instance, you would want to make sure the chicken was fully immersed in the water, and that you boiled it and you let it sit in that water for a long time. We’re doing the same thing here. We’re trying to get some of the – not the stock out of the chicken here, but we’re trying to get the chemicals we want to measure out of the meconium. And so it’s really important to mix it together and let it sit together for a while before we take off the solvent layer.

GRABER: The mixture then goes into a centrifuge so the liquid solvents that now contain the chemicals separate from the gooey meconium.

BARR: The part I’m about to show you is the part that makes our lab really unique.

GRABER: Barr walks to another room, which is filled with large beige pieces of equipment. Small robotic arms on one machine pick up tiny vials filled with liquids to be analyzed. This expensive equipment can detect and analyze miniscule amounts of chemicals.

GRABER: Studies from all over the country send samples here for testing, including a biomonitoring project looking at toxins in breast milk that was recently featured on Living on Earth. In this study, researchers aren’t only testing for lead. They’re also checking levels of pesticides, and of mercury. Like lead, these all are neurotoxins and can affect a baby’s development. Barr says she is now in the process of determining which solvents will best separate lead and the other neurotoxins from the Cincinnati meconium.

BARR: You know, it’s a part of the research process. And it takes time, often. Sometimes you’re very successful on the first few attempts. And really the development is not the arduous process. We know enough about the chemicals that we can easily develop it. It’s validating and make sure it’s a rock solid method before we apply it to the samples. That’s the part that takes a long time.

GRABER: At Case Western University in Ohio, Cynthia Bearer is the primary researcher on the lead and meconium study, collaborating with chemist Dana Barr. Bearer pioneered using meconium to check how many alcoholic drinks a mother consumed during pregnancy – an important quantitative move beyond just examining whether the mom had been drinking at all. Until then, scientists studied meconium to determine whether or not the mother had used illegal drugs. In her research, Bearer began with alcohol as a type of test case for studying environmental neurotoxins because both alcohol and these toxins affect the developing brains of fetuses.

BEARER: But you can ask a woman how much alcohol she’s had to drink and get some idea of what her exposure has been, whereas with a lot of environmental toxins, that’s very difficult to do. So I used alcohol as setting up a system for, hopefully, that I could apply for environmental toxins.

GRABER: Bearer hopes her research will eventually lead to routine meconium tests in hospitals. She says right now, newborns are given a blood test and the babies that test positive for rare genetic diseases can receive medicine or dietary changes that will help them lead normal lives.

BEARER: And if we had some way of screening newborns for exposures that were occurring in their environment, and we had these interventions where we could modify their environment so they weren’t exposed anymore, or we could intervene with some of these early learning paradigms, then we could improve their outcomes, too. We can improve these kids’ outcomes, and we’re not doing that now.

GRABER: If analyzing meconium proves successful as a measure of babies’ exposure to neurotoxins in utero, the next step is to determine what effect these levels have. And for the next three years, as the babies grow, members of the research team in Cincinnati will monitor their development. For Living on Earth, I’m Cynthia Graber.