Jaguars, the animal, not the car, used to inhabit the southwestern U.S. And sometimes a few of the big cats that live in Mexico cross the border into the States. The crossings have sparked a debate about whether to re-introduce jaguars to the U.S. From Tucson, Barbara Ferry reports.

When you think of jaguars in the wild, you may imagine a big yellow cat with black spots roaming the tropical jungles of Latin America. But many zoologists believe jaguars’ range used to extend into the southwestern United States. Though they no longer inhabit the U.S., jaguars from Mexico sometimes cross the border into Southern Arizona where, on rare occasions, a human will spot one.

These sightings are sparking new research and efforts to conserve jaguars in Mexico. They’ve also led to a debate over whether jaguars could or should ever be reintroduced into the United States. From Tucson, Arizona, Barbara Ferry reports.

FERRY: It’s easy to see a jaguar in Arizona. You just go down to the dealership here in Tucson…

SALESMAN: The XK8 is by far one of the most gorgeous vehicles on the road…

FERRY: But if you want to see a real jaguar— a sleek, beautiful predator whose name means “the cat that kills with a one leap,” the largest cat in the Western Hemisphere, an animal feared and revered by Olmecs, the Maya, and the Aztecs— if you want to see that kind of jaguar in Arizona, well then, you’ve got to be patient.

All right, I’ve got the film rewound. Now I’ll open it up, pull the old film out, put in the new.

FERRY: Childs has been trying to capture jaguars on film for the past seven years. Given how elusive and rare the cats are, it’s a full-time and, some say, impossible job. Childs hunts mountain lions for a hobby and has tramped these rugged ranges all his life. Using his knowledge of the land and of large cats, he has set up an elaborate system of automatic cameras in the mountains south of Tucson. To attract the felines Childs rubs his special potion— a foul-smelling substance containing skunk urine— on a rock about 10 feet in front of the camera.

CHILD: Hopefully any predators that come by will smell this and come over and investigate it, therefore posing for the camera (cough).

FERRY: Childs is a researcher for the Jaguar Conservation Team, an organization set up by Arizona’s Game and Fish Department to study cross-border jaguars. But he fell into jaguar research by accident. In August 1996, Childs, his wife Anna and group of hunters were out exercising their hounds in the Baboquiviri Mountains south of Tucson. There they had an encounter that would change Child’s life.

CHILDS: Pretty soon the dogs got way up high on the slope of a big, bluffy, steep, brushy mountain. We heard them jump this animal and bring it to bay….

FERRY: Childs recently told his story to a captivated audience of ranchers and other locals in a one-room schoolhouse in the tiny village of Arivaca, close to where the encounter happened.

CHILDS: Well, Matt and this other boy were nice and young, and my wife and I decided, well, we’ve seen mountain lions before, we’re going to sit here on the mules and you guys climb that mountain and take some pictures and bring the dogs back.

FERRY: But, as time passed, Childs’ curiosity got the best of him and he went to investigate.

CHILDS: About halfway up the mountain I meet this young fella coming back down and he says, Matt sent me down to get ya. And I say, what’s up? And he’s says we’ve got a jaguar. I said “my goodness.”

FERRY: Childs ran up the mountain and spent the next half-hour looking at the jaguar. He was intrigued and moved by the experience. He retired from his job as a land surveyor and began to spend more and more time in the mountains trying to find another jaguar. Despite predictions that the scheme would fail, in December of 2001, one of Child’s 15 automatic cameras snapped a photo of a young male jaguar. It was the 60th documented sighting of jaguar in the United States in the last 100 years. The jaguar’s photo appeared on the nightly news, and the feline became a sort of wildlife celebrity in the Southwest. 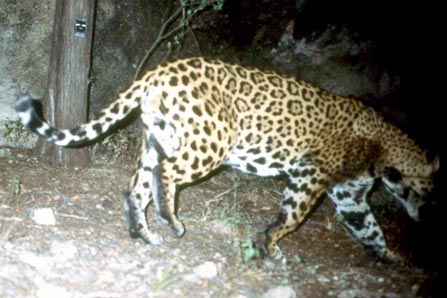 NEWS ANCHOR 1: Arizona could be home to another big cat…

NEWS ANCHOR 3: This is a picture of a jaguar in a remote location somewhere south of Tucson…

FERRY: Soon the state Game and Fish Department was flooded with calls of none-too-credible sightings. Excitable Arizonans were apparently mistaking everything from coyotes to Labrador Retrievers for jaguars.

GLENN: When something like that’s looking at ya, a big old cat like that, it’s surprising how fast you can back up.

FERRY: In a ranch house about 100 miles east of Tucson, Warner Glenn folds his tall, thin cowboy’s frame into an armchair and talks about the memorable spring day in 1996 when he ran into a jaguar. Glenn was leading a lion hunt in the Peloncillo Mountains near his ranch. He thought he was on the trail of a large tom lion. But when his dogs cornered the cat, he got the shock of his life. The animal made such a surprising sound, it confused Glenn for a moment.

FERRY: Glenn quickly moved closer to pull his hounds away from the jaguar. At that moment, the jaguar locked eyes with Glenn and prepared to charge.

GLENN: And when he started to come, he jumped up on a ledge there and the next jump he would have darn sure been right in the middle of me. But I was already starting to run backwards.

FERRY: Glenn got away from the jaguar. The cat also retreated. At the end of the confrontation, Glenn had a hound with a broken leg and 17 photos on his tiny point-and -shoot camera. To his and his wife Wendy’s surprise, the photos came out. At that point, Wendy Glenn realized they had to make a big decision.

W. GLENN: We had we had to make the decision of whether we would go public or not.

FERRY: Overshadowing that decision was the history of distrust between ranchers and the federal government. Much of the Glenn's ranch, like most ranches in the West, is made up of leased federal land. Many ranchers fear that if the government declares that land critical habitat for endangered species, then cattle grazing would be banned. Wendy Glenn.

W. GLENN: There were a couple of ranchers that said he should have killed the jaguar and just said nothing. But his answer back was, for what reason? It was most beautiful animal he ever saw, and why kill it?

FERRY: One result of the Glenns’ decision to go public was that an environmental advocacy group, the Center for Biological Diversity, sued the Fish and Wildlife Service to have the jaguar listed as an endangered species. The Service put the jaguar on the list in 1997. And that started the political debate of what, if anything, to do about the wandering jaguars.

SUCKLING: The ranchers in southern Arizona are famous for declaring that the sky is falling down on virtually a monthly basis.

FERRY: Kieran Suckling is director of the Center for Biological Diversity, the group that sued to get the jaguar listed. He believes that ranchers’ concerns about losing grazing privileges are exaggerated. To date, no critical habitat designation in Arizona has resulted in cattle being removed from federal land— though Suckling says that’s a failure of the system.

SUCKLING: There are many millions of acres of federal land in Arizona and New Mexico that should be managed for endangered species such as jaguars. And this is federal land owned by the American people. It’s not too much to say that that land should be managed in the interests of all Americans, not six or seven ranchers who hold leases on that land.

FERRY: At the crux of the political debate over jaguars in the United States is a biological question. Most everyone agrees that the visitors are coming from a remote area in the Mexican Sierras, about 130 miles south of the border. But they disagree about whether any territory within the United States was ever true habitat for jaguars. David Brown is a wildlife biology professor at Arizona State University and author of a book on jaguars

BROWN: It’s always been a peripheral animal. The actual occurrence of this animal as a breeding population in Arizona or New Mexico is very much in doubt. I mean, it’s not definite one way or another.

FERRY: Brown insists all the fuss and hullabaloo over wandering jaguars is politics and nothing more. Since he believes the U.S. is marginal habitat for them, he says jaguars are unlikely to set up full time residency in this country no matter what anyone tries to do to protect them.

But Kieran Suckling argues that if jaguars had not been shot, trapped, and poisoned in the United States, they would be thriving here. He points out that in the 1800s, jaguars were seen as far north as Los Angeles and Colorado. In those days, and even until recently, a jaguar encountered by a human usually ended up as a trophy on a wall.

FERRY: Now that jaguars are legally protected, Suckling envisions a day when they colonize the United States – either on their own or by an active reintroduction program. At this point, reintroducing the jaguar isn’t on any government agency’s agenda. Tucson writer Chuck Bowden, author of books on the natural environment of Arizona, says that although jaguars are not of biological importance in the U.S., we should be working to restore them here.

BOWDEN: So, basically, to bring them back is like bringing back the wolf in the Southwest, of which there were at most probably 2,000 before settlement. It’s a gesture towards restoring a kind of wild world that makes humans feel better. It is not a case of ecological management to make an ecosystem healthier.

FERRY: While Arizonans argue over what should be done for jaguars in the United States, just about everyone seems to agree on one thing. Support is needed to protect jaguars in their home base in Mexico where they are often still killed by ranchers seeking to protect their cattle. Both ranching and environmental advocacy groups support a research project led by Mexican scientists trying to determine whether the Sonoran jaguar population is stable or in decline. The researchers are also seeking money to buy out cattle ranchers in the area in order to create a jaguar preserve. Biologist Carlos Lopez of the University of Queretero in Mexico leads the project. 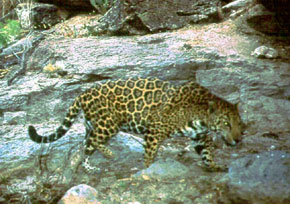 FERRY: Though the border between the United States and Mexico may be meaningless to a wandering jaguar, by crossing it and getting captured on film these rare cats may have done something to help save their own species.

For Living on Earth, I’m Barbara Ferry in Tucson, Arizona.