The government's Toxic Release Inventory keeps tabs on industrial pollution. But a new report says actual emissions of some cancer-causing chemicals may be four to five times higher than what the inventory says. Living on Earth’s Jeff Young reports on new doubts about the inventory's accuracy.

CURWOOD: From the Jennifer and Ted Stanley Studios in Somerville, Massachusetts, this is Living on Earth. I’m Steve Curwood.

For more than 15 years, a database called the Toxic Release Inventory has helped governments, businesses, activists, and just ordinary citizens keep tabs on the poisonous chemicals discharged into our air, water, and landscape. The U.S. Environmental Protection Agency collects reports from industry on how much toxic matter is emitted into the environment. That information in the TRI, as it’s known, has played a major role in reducing pollution from industry by guiding regulators and arming environmental groups with real data.

But a recent report calls into question the accuracy of the Inventory and calls on the EPA to approve the quality of the data. Living on Earth’s Jeff Young joins me now from our Washington Bureau. Jeff, why is this new report about the Toxic Release Inventory causing so much concern?

YOUNG: Well, environmental groups had long assumed that the Inventory’s numbers were low, but no one had a way to measure just how low. The Washington-based group Environmental Integrity Project says they now have a way to do that. They partnered with an air quality group in Texas to compare the emissions reports on the Inventory with actual measurements of chemicals in the air in the Houston/Galveston area, which has a lot of refineries and chemical plants. State officials in Texas had already determined that ten kinds of toxic air emissions were underreported to TRI and the report applied the same method across the country and found the Inventory’s numbers for those ten chemicals are way off.

CURWOOD: Way off meaning what, Jeff?

YOUNG: The report says the actual emissions of some these chemicals may be more than 400 percent higher than what’s reported on the Inventory. This is Kelly Haragan who co-authored the report. 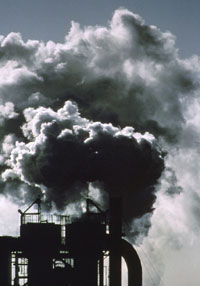 HARAGAN: It’s off by huge amounts and it’s significant because these things are so dangerous. Benzene and butadiene are both rated by EPA as some of the biggest risks for cancer. Um, so the purpose of our report was to show how big this problem is and to hope that EPA would start paying attention.

CURWOOD: Well, how much is EPA paying attention to this?

YOUNG: Well, the Agency made its annual release of Inventory data a little early this year in part to respond to Haragan’s report. And EPA spokeswoman Kim Nelson expressed some doubt about the report’s numbers but said the Agency would look into it.

YOUNG: An industry representative I spoke with also questioned whether the method that Environmental Integrity has used for this report can really be applied across the country. But this is not the first time that EPA has been told that its numbers need some work. Congress’s General Accounting Office pointed to problems three years ago, EPA’s Inspector General this year said emissions factors that EPA uses to calculate emissions were not reliable.

CURWOOD: Well, wait, Jeff, you’re saying that these numbers in the Toxic Release Inventory are calculated. They’re not actually measured?

YOUNG: Yeah, only about five percent of numbers on the Inventory come from direct monitoring and the rest come from calculated estimates. The critics here say that’s the root of the problem. They want more direct measurements and improvements in the way that the emissions estimates are calculated.

CURWOOD: Jeff, with all this talk about numbers, we don’t want to forget that these numbers actually represent poisons in the air that we breathe. What does this mean for people who want to use the Toxic Release Inventory to find out if the air in their neighborhood is okay?

YOUNG: Well, on the whole, the Inventory is an amazingly useful tool. But I found a few examples where community groups working for cleaner air found what they think are highly inaccurate numbers on the Inventory working against them. Louisville, Kentucky is a good example. There’s an industrial complex there called Rubbertown. It’s a collection of a dozen or so plants with residential areas and schools bumping right up against the industry’s fence line. And people there had long complained about unexplained illnesses, smelly air. So they organized, they got some funding for air monitors and those monitors showed high levels of toxins. Now the community member Tim Duncan told me that when his group would ask for an explanation from the companies, the companies would respond with the much lower emissions numbers on the Toxic Release Inventory.

DUNCAN: On the one hand, the chemical plants are able to point to the TRI information and say look, it’s safe, it’s no problem, we’re not presenting a hazard to the community. When we look at the air monitor readings though, they tell us something completely different.

YOUNG: And this report on the Inventory’s inaccuracies addresses the leading polluter that Duncan is dealing with there in Louisville. And the report says that company’s actual emissions may be four times what the company reports to EPA for the Inventory.

CURWOOD: So, Jeff, what do critics want to see changed here? What do they think might make the Toxic Release Inventory better?

YOUNG: Well, the recommendation is that EPA should use more direct monitoring and improve their estimate techniques and nearly everyone I spoke with says, yeah, that’s a good idea. The concern from critics of EPA say the Agency may be more concerned about reducing what the Agency calls the industry’s burden of reporting emissions data.

CURWOOD: What do they mean by industry burden, Jeff?

YOUNG: Well, direct monitoring costs more money than estimating and, of course, the industry would like to avoid extra costs if they can, so they’ve sued, they’ve lobbied and critics say they’re making some headway. The EPA is entertaining some ideas like switching away from more regular monitoring to less frequent monitoring.

CURWOOD: So, Jeff, what does all this mean in terms of getting information about industrial pollution to the public?

YOUNG: Well, I spoke with a lot of people -- academics, activists, researchers who use the Toxic Release Inventory data in a lot of different ways -- and some are kind of philosophical about it. They say, we’ve always known that this was an imperfect set of data and that it had problems and we would have to do additional work, that TRI as a starting point for additional monitoring that you’re going to have to do. And over time the data will improve in quality. Others I spoke to looked at it and said, boy, the magnitude of the potential error that we’re talking about in this report, two, three, four times off, that’s a real problem and they seriously wonder if the Agency is serious about the job of approving the data.

Scorecard is a clearinghouse on environmental pollutants

The Right-to-Know Network provides public access to information on the environment, including the Toxic Release Inventory.