The Green Party has nominated its presidential candidate, and it’s not Ralph Nader. Host Steve Curwood talks with David Cobb, who won the nomination by a narrow margin, about his strategy for this year’s election cycle.

CURWOOD: David Cobb isn’t exactly a household name. But the Green Party is not banking on name recognition for the November elections. At its recent convention in Milwaukee, Wisconsin, Green Party members chose the little-known lawyer from Texas as their Presidential nominee over their longtime media star and consumer activist, Ralph Nader.

The nomination is an upset for Mr. Nader, who had hoped for an endorsement from the Green Party, in order to get his name on the 22 state ballots where the Greens have secured a space. Now those slots will go to David Cobb. He’s been a member of the Green Party since 1996 and was pivotal in getting Ralph Nader on the Texas ballot in the year 2000. Now Mr. Cobb is in the running, but he says he’s not out to win the presidency. His strategy stems from lessons learned during Ralph Nader’s 2000 run for the White House. David Cobb joins me now. Welcome to Living on Earth, hello, sir.

COBB: Hello Steve, it’s a pleasure to be here.

CURWOOD: Now, your staff says that you’re running in this race but you’re not out to win the presidency. So, why are you running? 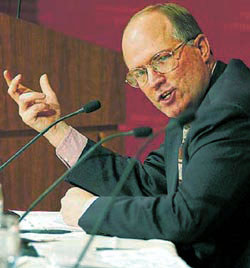 COBB: Well, I’m running in order to ensure that there’s a candidate and a political party represented that’s running on an end to the Iraq war and bringing our troops home. I’m running in order to ensure that there is a genuine grassroots movement ready to continue to advance progressive causes, regardless of whether John Kerry or George W. Bush wins the White House.

CURWOOD: Now, why do you think the Green Party rejected Ralph Nader?

CURWOOD: What would you like to achieve for the Green Party?

COBB: I would like to see more ordinary citizens actively engaged in politics. And that doesn’t mean just voting, it means getting involved in their local communities working on issues. It means registering in the Green party which is the only political party based on fundamental core values of peace, racial and social justice, economic democracy and genuine ecology. I want to see more local candidates get elected on the Green Party ticket, I want to see an actively engaged citizenry that’s going to be able to advance a progressive agenda regardless of who wins the White House.

CURWOOD: The Green Party is on the ballot in 22 states. To what extent are you concerned that your campaign will hurt the Democrats in those states?

COBB: Well, you know, it’s really not my job to help or hurt the Democrats. The reality is that more and more Americans are feeling disempowered and disconnected by both corporate parties. And what Greens are doing are bringing more people into the electoral process, and the Green Party is providing a home for genuine progressives to do our work.

CURWOOD: Now, you’ve said that you’re not concerned about hurting Democrats but as I understand it, you have a “safe state” strategy, and that you’ve indicated you won’t campaign in certain battleground states, states that are expected to be close between Mr. Bush and Mr. Kerry. Or that’s not true?

COBB: No, it’s not true. What I’ve said is I’m going to get on every ballot that I can possibly get on. The reality is this: listeners in roughly 40 states, they’re called “safe states,” but I call them neglected states. The corporate parties and the corporate candidates are not going to actively campaign there because they are, quote, “safe.” In those states, I say, “Progressives, don’t waste your vote. Invest your vote.” A vote for John Kerry in those states won’t help to un-elect Bush. All it will do is signal support for the Democratic Leadership Council and the corporate policies that it represents. In the other states, I’m acknowledging that there is a profound responsibility on the citizens, and they should weigh their options and decide how to spend their very precious vote.

CURWOOD: You say that you’re in this race to energize a Green Party. What are the races across America that you are campaigning hard for and hope to win?

COBB: Well, it’s important to put this into perspective, Steve. In 1996 there were approximately 40 Greens elected to office. In 2000, there were 87 Greens elected to office. Today, there are 205 Greens elected to office. We’re running more candidates, we’re getting more candidates elected, and when Greens get elected, we are proving that we can govern, that we can actually make lives better. What I’m going to be doing is working in partnership with Greens in various states, at various local chapters. I’m going to be going to Pennsylvania and Ohio to focus on ballot access issues immediately. I certainly hope you’ll agree with me that the Green Party has a right to participate in elections. And I certainly hope you’ll agree with me that we ought to have the right to be on the ballot.

CURWOOD: I don’t think that anyone who subscribes to the Constitution of the United States would want to deny anyone the right to form a party or have a party on a ballot. But you yourself have said that the differences between Mr. Bush and Mr. Kerry are such that progressive folks would find life a good deal more comfortable with Mr. Kerry in the White House. So campaigning actively in a place like Pennsylvania or Ohio where the vote might be very close might in fact serve, at this point in our electoral law and structure, to hand a victory to Mr. Bush.

COBB: Steve, it’s up to John Kerry to campaign in those states, as it is up to John Kerry to campaign in every state to convince voters to vote for him. I’m going to try to ensure that there is a Green Party ballot line in every single state. It’s going to be a difficult election cycle but what we’re saying is, “We are not going away.” And that most Americans are so disgusted and disempowered that they’re not even participating in the elections. I think that we should spend a little more time talking about how we can actually actively involve ordinary citizens into participating in elections, rather than worry about what the Green Party will or won’t do in a given state.

CURWOOD: David Cobb is the Green Party’s nominee for president in this election cycle. Thanks so much for taking this time with me, sir.

COBB: It was a pleasure, Steve, thanks so much.

CURWOOD: Just ahead a solution for today’s environmental problems called “green jazz”. Stick around for more of Living on Earth