We meet Tony Abbott, a world-renowned, self-taught botanist. He takes host Steve Curwood to a sandstone gorge in the heart of the Wild Coast and introduces him to newly discovered species that have yet to be named.

CURWOOD: It’s Living on Earth. I’m Steve Curwood, in the Pondoland along the Wild Coast of South Africa riding along in a four-wheel drive truck with Tony Abbott.

Tony is perhaps one of the foremost amateur botanists in the world. He’s an Englishman who left Zimbabwe more than two decades ago to try his hand at growing bananas in South Africa. Tall, craggy, and quick with ironic wit, he started hiking with a well-known amateur botanist throughout the region and learning plants.

Today, even though he has no formal training, Tony has been credited with discovering at least five species and having them named after him in the scientific literature. He says there are even more to discover in the Pondoland, which is one of perhaps fifty major botanical regions in the world still largely in its natural state -- and famous for the rare Pondo Man’s Tea Tree.

We’re off to see some of the plant life and other natural features near Nyameni Falls in an area that has been staked out as a possible route for a toll road linking Durban and East London.

CURWOOD: Tony Abbott gets out of the car and heads towards some bushes. Suddenly, the vista opens up into a massive sandstone gorge with a spectacular waterfall cascading down the far wall. He describes why the Pondoland region, which is two thirds of the size of the state of Rhode Island, is a biodiversity hotspot. 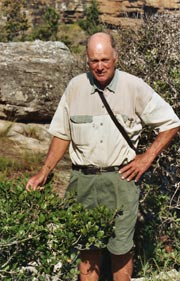 ABBOTT: It’s not very big. It’s 180,000 hectares, and it’s the smallest of these centers in the country. The most exciting thing about it is that many of the plants which are special here occur in very small distributions. And we always quote the Pondoland Palm as being the sort of flagship species of confined distribution because it grows along the estuaries of two rivers only.

ABBOTT: The Mtentu and the Mzikaba, just to the south of us here. It only grows on the north bank of those estuaries, and it doesn’t grow anywhere else in the world. But we have rarer plants than that. We have the Pondoland Ghost Bush, which for a long time was known from the odd single specimen; in 1965, we knew of one. And then that died, and then we found another one. And it was only in 2001 that we found a small breeding population. And that is the only place that they breed. So this is a plant which is obviously on its way out, because at the turn of the century -- not this century but the turn of the last century, in the 1900s -- it was spoken of as being fairly common on these sandstone waterfalls.

CURWOOD: Tony, how many different species of plants are there in this region, do you think?

ABBOTT: We talk about more than 2,000 species of plant in the Pondoland Center Plant Endemism, with certainly 10 percent of those endemic. But we’ve got a much closer idea with the Umtamvuna Nature Reserve. There it’s three and a quarter thousand hectares in extent. There’s 1,350 species of flowering plant and another 100 species of non-flowering plant. So we’re talking about 1,450 species. And these I have collected and they are kept in a hyberium so I can say this number with confidence. And in that three and a quarter thousand hectares, you’re looking at sort of the same amount of number of plants that occur in the whole of the United Kingdom, which is quite, quite remarkable.

So, we are very unhappy because there are major decisions being made about development in the area, and we believe that they are being made without taking cognizance of just how rich and diverse this area is. So I think, yeah, we have a big problem there. 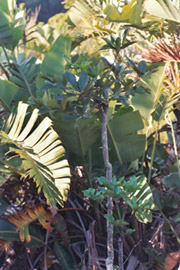 I’ll show you on that point over there, there’s a new species of cabbage tree. Do you know what a cabbage tree is?

ABBOTT: This only came to light last year. There’s another tree further up which has only come to light this year. There’s a morning glory, a species of Ipomoea, which I’ve only seen on two different occasions. It’s never been seen before. There are so many. There’s a species of Erica, a Heath, which is awaiting description. And all these things are coming out and, unfortunately for me, I suffer from something I call orographic degeneration.

ABBOTT: And that means the mountains are getting taller

ABBOTT: I no longer walk like I used to walk and we need more young people to get out there into these sort of areas and to walk in the wilder parts. But one thing I must tell you, walking up here towards the falls with a group of people, we went in down river from here and we were walking up and there was an incredible sweet scent drifting down the river, superb scent. And we could see nothing that was flowering until we walked around a corner, and there was a new species of tree. It’s undescribed at this time.

New species of tree flowering there with big yellow flowers, and this incredible scent filling the whole valley. And you know, to put across to people who are perhaps not interested in plants, the excitement and the thrill of seeing and experiencing something like that was a very, very special event in my life. It was superb.

CURWOOD: (sniffing) Too bad you can’t smell things on the radio. (laughter) I’ve heard that you’ve had, what, some five trees named after you? How did that happen?

ABBOTT: Well, it happens because first you’ve got to find things that are unknown. And people say, well how do you do that? How can you look at a tree or a plant or a shrub or a flower in the field and say that it’s new, it’s different? And the best way I can describe that is that – there goes a Lanner Falcon. There he goes. Isn’t he beautiful? Just coasting across the way. There he goes –

– it’s like in your workplace or in your school, and you know all the faces. And suddenly a new person moves in there and you say, where do you come from? Now how do you know it’s a new person? And it’s exactly the same with a plant. You have a mind picture of the people that live in your area and you recognize them. And when somebody new comes in, doesn’t fit your mind picture, you recognize it. And it’s exactly the same with plants.

CURWOOD: You have no degrees in botany?

ABBOTT: No, no, I’m totally ignorant. I’m just a farmer. In fact, I usually say, “I’m just a banana farmer.”

CURWOOD: But, of course, you know a lot more than that.

ABBOTT: Well, it’s…if you have an interest, you don’t need qualifications at the beginning. You gain it all as you go along if you’re interested in it. And I don’t want the kind of deep qualifications, I don’t want to sit in an office in a hyberium studying through microscopes and writing vast papers on computers. Not my interest at all. This is where I want to be. This is where I’m happy. Out here with the waterfall in the background, Lanner falcon over the top, and there were some black swifts here just now, and all these wonderful plants that are my friends.

CURWOOD: Tony Abbott is world-renown amateur botanist who lives in Pondoland on the Wild Coast of South Africa.