Living on Earth’s Jennifer Chu reports on efforts to rehabilitate the black rhino.

CURWOOD: Just ahead: trying to reap a dividend of peace by bringing a culture and its language back from the brink of extinction. First, this note on emerging science from Jennifer Chu.

CHU: Efforts like South Africa’s Black and White Rhino Management and Conservation Project are helping to put the almost-extinct black rhino on the road to recovery. The black rhino population dropped to roughly 2,400 in the 1990s from previous estimates of 100,000 in the 1960s. The numbers fell when demand for rhino horn, used for everything from dagger handles to anti-fever medication, caused rampant poaching throughout Africa. 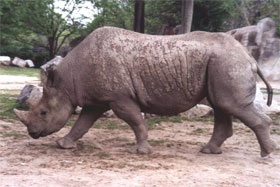 But habitat protection efforts and improved law enforcement have helped revive the numbers. South African officials also credit the recovery to landowners who’ve been converting farms into private nature reserves where the rhinos can thrive. Breeding programs have also played a key conservation role as managers work to keep individual rhino populations at the appropriate size for their specific habitats.

By keeping the groups small, female rhinos are kept in top breeding condition rather than being forced to compete with other females for food. Scientists hope such efforts will mirror the success of the black rhino’s bigger cousin, the white rhino, the world’s second largest mammal. The white rhino population once dwindled to just fifty a century ago, but today stands at 11,000. That’s this week’s Note on Emerging Science. I’m Jennifer Chu.

CURWOOD: And you’re listening to NPR’s Living on Earth.

ANNOUNCER: Support for NPR comes from NPR stations, and The Noyce Foundation, dedicated to improving math and science instruction from kindergarten through grade 12; Ford, presenting the Escape Hybrid, whose full hybrid technology allows it to run on gas or electric power. Full hybrid technology details at fordvehicles.com; The Annenberg Fund for excellence in communications and education; and, The Kellogg Foundation, helping people help themselves by investing in individuals, their families, and their communities. On the web at w-k-k-f dot org. This is NPR, National Public Radio.