Around the nation aging nuclear power plants are asking the Nuclear Regulatory Commission to allow them to produce more power then they were licensed for. The Vermont Yankee Nuclear Power Plant is one of them, and as nearby residents wait for the commission’s decision, there’s a controversy over whether the plant can handle the increased load. Reporter Eesha Williams, of the Valley Advocate newspaper in Western Massachusetts, spoke to Steve Curwood about the issue.

CURWOOD: The owners of 90 nuclear power plants across the United States are asking the Nuclear Regulatory Commission for permission to increase the amount of power their plants can generate. The move would also boost their profits. 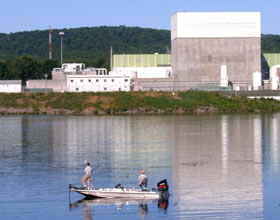 One of the plant operators seeking this change is the Entergy Corporation, which owns Vermont Yankee, one of the nation’s oldest nuclear plants. Entergy wants a 20 percent power increase, or uprate, as it’s called, for Vermont Yankee, but the bid has attracted protests because of the plant’s age and safety problems.

WILLIAMS: Thanks, it’s good to be here.

CURWOOD: Why is Entergy seeking to increase the power there?

WILLIAMS: They will generate 20 percent more power. They can sell that, make 20 percent more profits without major investments in the plant. They’re in business to make money and they see this as a good way to do it.

CURWOOD: So how well has the plant performed? I mean, how reliable is it? And what kind of problems has it had?

WILLIAMS: Vermont Yankee, by and large, has been a very reliable source of energy. It’s only in recent years, as the plant has aged, that it’s had a few problems. This year, cracks were discovered in a critical component at the plant. Actually, 20 cracks. There was a fire in a non-radioactive part of the plant that required the plant to be shut down for almost three weeks.

CURWOOD: What about the question of compromising safety by increasing the power output? The companies – what do they tell you is the margin of safety that’ll happen even if this plant were to go up by 20 percent in power generation. They must be presenting convincing evidence to the Nuclear Regulatory Commission that they can do that safely. What is that evidence?

WILLIAMS: Well, Steve, that’s an excellent question, and to be perfectly honest, it does increase risk. There is an increase. You run this power plant 20 percent harder, hotter, faster than its ever been run before at a time when it’s developing cracks, it’s over 30 years old. It’s been running 24 hours a day almost seven days a week for 32 years. This does increase risk.

What is Entergy’s say? They say this plant was over-designed when it was designed back in 1967, the engineers incorporated extra protections – just like when they build a bridge, they design it for the worst possible hurricane times ten. Vermont Yankee was built to withstand more than the worst possible accident that could happen. But ultimately, the safety margins are reduced.

The federal government has estimated that 7,000 people would die within a year of a serious accident at Vermont Yankee. And, in fact, just early September this year, Vermont, for the first time of any state in the country – any one of the so-called uprates, or power increases – the state of Vermont has intervened, has petitioned the Nuclear Regulatory Commission for the right to have a hearing to express its concerns about just this issue, about safety.

CURWOOD: Now what’s the public response been to Entergy’s request to increase the power at Vermont Yankee?

WILLIAMS: Well there’s only been one hearing so far in the area around Vermont Yankee. The town is called Vernon, a town of about 2,000, where Vermont Yankee is based. And the federal Nuclear Regulatory Commission sent of a group of high-ranking officials from its headquarters in Washington to come out to Vernon. And they held the hearing at the elementary school, which is right across the street from the nuclear power plant, and I think they were surprised. I think it’s fair to say they were surprised by the turnout. Over 500 people turned out. I was at the hearing. It lasted far beyond when it was supposed to end – it started at seven o’clock at night and went I think about till midnight. And I think it’s fair to say that 99 percent of the speakers were adamantly opposed to the uprate, to the power increase at Vermont Yankee.

CURWOOD: And why did they say they were opposed?

WILLIAMS: People are concerned about the waste. There was never a deal between Vermont Yankee’s owners and the people in the towns around it that there’d be a permanent nuclear waste dump in their town for 10,000 years. They were given assurances that this waste would be shipped to Nevada to the desert to be buried under Yucca Mountain. And now that is very much in doubt. In fact, John Kerry has said that if he’s elected he will not let Yucca Mountain open.

CURWOOD: So where will Vermont Yankee’s waste go, if not to Yucca Mountain?

WILLIAMS: Vermont Yankee’s waste – 500 tons – is now sitting in what they call a spent fuel pool. It’s like a giant swimming pool, it’s 40 feet deep and it’s seven stories high, in this tall building on the side of the Connecticut River. That pool has been what they call “re-racked.” Basically they’ve re-arranged it so they can fit more waste in it than it was intended to hold. The way that pool works is that – and the reason nuclear power plants are always by a large body of water, a river, an ocean – is that they need huge amounts of water. Tens of thousands of gallons every hour to cool down this waste. If that water ever stops flowing around that waste a nuclear fire would take place, and that would cause terrible consequences.

CURWOOD: So, what does the Nuclear Regulatory Commission look at when it considers whether or not a power plant, a nuclear power plant, can increase its power?

WILLIAMS: Well, that’s a good question, and that’s much in the news these days. Maine Yankee, which was another nuclear power plant similar to Vermont Yankee – that was closed in 1997 following an investigation, an independent safety assessment which was demanded by the public, by the communities around the plant and by then-governor Angus King of Maine. And due to this real rigorous public pressure the NRC appointed independent observers and conducted a very rigorous inspection. Thousands of hours of engineers were crawling over this plant. They found so many safety problems at Maine Yankee that the owners found it cheaper to just close the plant than to fix all the problems. Now with Vermont Yankee, critics say the NRC is being much less rigorous.

CURWOOD: So what do you think the odds are that the NRC is going to approve a power increase for Vermont Yankee?

WILLIAMS: Well that’s the big question in Vermont. The NRC has said it will issue a decision by January. There’s never been this kind of public opposition. A state has never asked to intervene with the NRC regarding an uprate application, or power increase application. The Congressional delegation for a state has never intervened in this way and requested a Congressional investigation. So, at this point it’s anybody’s guess. But if you were a bookie in Las Vegas, you’d look at the NRC’s history. And it’s 90-plus “yes’s,” zero “no.” So, that would make it seem that the odds are pretty good that Entergy will get at least some uprate. Maybe not 20 percent, but at least some amount of power increase for Vermont Yankee.

CURWOOD: Eesha Williams covers the nuclear power industry for the Valley Advocate newspaper in Massachusetts. In 2003 he won Vermont’s top award for investigative journalism from the Vermont Press Association. Thanks for taking this time with me today.

CURWOOD: Coming up: a plea to keep life as humans have known it for thousands of years in Southern Africa. Keep listening to Living on Earth.