Josie Glausiusz, author of "Buzz, the Intimate Bond between Humans and Insects," tells all you need to know about one of our most intimate insect partners – bedbugs.

CURWOOD: Insects are everywhere – they can drive us crazy, make us sick, feed us, feed on us and help us in ways we’re often unaware of. This week, we’re kicking off what will be an occasional series about these tiny creatures by author Josie Glausiusz. Today, she chronicles the intimate connection between humans and bedbugs.

GLAUSIUSZ: The bed bug is a strange and persistent bedfellow. Its been sleeping with us since we first started dwelling in caves.

At least twelve species of these blood suckers are parasites of bats, and many others feed on cave-nesting birds. Their descendents, probably realizing that humans are edible, too, followed us to our homes, hiding by day in the walls of houses, or inside bedding, and emerging by night.

According to a 14th century dictionary of the life of animals, the creature was said to have "its origin in warm blood, and an extravagant fondness for humans." This book of beastly lore may have been mistaken about the bug's origin, but it was accurate about its love for blood. It needs this nourishment to molt from nymph to adult. Though it doesn't transmit disease, it is extremely annoying, as its saliva triggers large, itchy bumps on the skin; and excessive biting can cause anemia in infants. 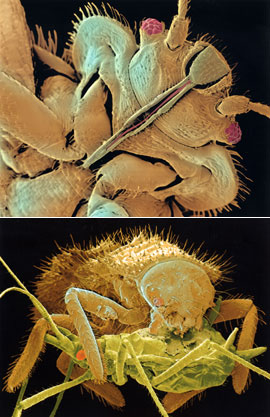 Male bedbugs have been called "the sex maniacs of the insect world," since there seems to be no limit to their lust. They'll mate with females repeatedly, both of their own and other species; and with other males as well. The bed bug's sex act, called traumatic insemination, is also unusual: the male takes his copulatory organ, and stabs the female in the abdomen; from there, the sperm must travel to her oviducts. Strange sex acts in bed may be the least that humans have to fear, though. Once driven away by DDT, bedbugs and their biting ways are making a comeback. Hiding out in people's suitcases and old flea market furniture, they travel from place to place, and pesticide resistance makes them hard to eradicate.

The bed bug was once used as a remedy for snakebites. The ancients said, "Seven bed bugs mingled with water were a dose for a man, while four were sufficient for children, and the smell of them will relieve 'hysterical suffocation.'"