During the first Gulf War, Saddam Hussein systematically drained what had once been one of the world’s largest and most spectacular marshes. Hundreds of thousands of marsh dwellers were displaced as the land was almost completely dried up, killing fish and other wildlife and vegetation. Azzam Alwash who founded "Eden Again," one of several organizations dedicated to restoring the marshland, talks to Steve Curwood about the recent developments in southern Iraq and why there’s reason for hope.

CURWOOD: Another name for Iraq is the "Cradle of Civilization." That's because an area of vast wetlands in southern Iraq at the confluence of the Tigris and Euphrates Rivers is considered by some scholars to be the Garden of Eden. During the first Gulf War, Saddam Hussein began draining 2,000 square miles of these wetlands in an attempt to rout rebels hiding there. Most of the people living in the area fled and the once massive marsh lost more than 90 percent of its original size. But since the fall of Baghdad, the great marshlands of Mesopotamia have started to come back. Joining me is Azzam Alwash, a civil engineer and founder of "Eden Again"-one of several groups helping to restore the marshlands. Welcome.

ALWASH: Thank you for having me.

CURWOOD: Can you tell me why you care so much about this place? Why is it so unusual?

ALWASH: Steve, I grew up in and around the marshes. As a young man, I used to accompany my father in his frequent visits into the various hamlets, the various hamlets to resolve water disputes. And, that experience has, basically, has not left. It's with me and has been with me for the last 25, 30 years having left Iraq in 1978. Since coming to this country or when I was living in the United States, I was an avid kayaker and I used to tell my wife, 'wait until Iraq is liberated; we'll go kayaking in this heaven on earth, this magical place, called the Ouar, the marshes of southern Iraq.'

If you spend a couple of hours there, you just can't help but fall in love with the place. There where nature and man have been integrated into one; where man has affected the evolution of the system and the system has affected the growth of this water culture. This Sumarian way of life still exists today. The people of the marshes are still using the same skills that they have used for 7,000 years to survive in this environment. It's a magical place.

CURWOOD: What did it look like at its worst point after this diversion and draining?

ALWASH: I visited the place for the first time in 25 years in June of 2003, just right after the liberation of Iraq. And, instead of these rivers of water and these mountains of reeds, what I saw was dry, desiccated land that extended as far as the eye can see, with desert plains, zur, or what's called tamaracks, the scientific name, everywhere. Instead of these reed beds, instead of the hamlets, I saw platforms where bricks, that formerly were houses or reeds that had been burned existed. There was no alive, there is no fish, there is no water, there is no human beings. It was a desert.

CURWOOD: Can you describe for me what the marshes look like now?

ALWASH: The people of the marshes, as the troops were going up north, Baghdad had not fallen yet, began breaking the dykes and the control structures that held the water away from these marshes and they started returning the water to their marshes as early as the second week of April. And, as it turns out, by their actions, they had essentially saved me a big step. One of the major steps that I thought I was going to have to take is to try to convince the Iraqi people that, in fact, the marshes need to be restored. Well, that war need not be fought. People were actually eager to return the marshes and by their own actions they actually told us which part of the marshes they wanted restored first because they, in fact, voted with their own hands if you will. Nature is an incredible force.

You know we were worried that it's going to take a long time for the restoration to take place. As it happens, in Iraq all you need to do is introduce water. Now, grant you, I'll grant you that it's not just as simple as reintroducing water, but the reintroduction of water has caused reeds to grow back, people have started moving back in. What is our major challenge at this point is how to make sure that the areas that have been inundated or flooded continue to thrive.

CURWOOD: What are some of the keys that you've found to restoration? What does nature do and how might you have to help nature where the restoration process isn't going so well?

ALWASH: What we have learned is that the marshes evolved around this idea of the fresh pulse of water coming in, timed in the spring when the snow melts in the mountains of Iraq and Turkey. This fresh pulse of water comes in just about as we speak right now between February and April or May and you have 60 percent of the water resources that goes into Iraq used to come into Iraq during these three months. So, every year, there is this brackishness that accumulates in the water. And, then there is this pulse of flood water that comes in in the spring just as the reeds come back from dormancy, just as the fish swims back from the gulf into the marshes to spawn, just as the birds are migrating. This whole cycle of nature kind of is a symphony kind of timed to recreate the cycle of life, starting in the spring.

CURWOOD: What about the source of water for this marshland? The headwaters, of course, of the Euphrates aren't in Iraq, but across the border in Turkey. And, I gather, there are some tensions there. How do you think this situation can be resolved?

ALWASH: For complete restoration, for making sure that we will have these marshes forevermore and our great, great, great grandchildren can enjoy this place, we need to reach an agreement between Turkey, Iraq, Iran and Syria about the equitable sharing of the waters of the Tigris and Euphrates. What I am advocating at this point in time with the Iraq government is that they need to reach discussions with Turkey and they need to move from their existing position. The existing position of the Iraq government is that we have a historical right for the water of the Tigris and Euphrates because we were the first developers of the water resources of that area. However, if we insist on this position we are going to end up with discussions for 50 years without reaching a solution.

CURWOOD: Now, you've said that the restoration of the marshes is really a symbol that life after Saddam Hussein can be better. To what extent has that been realized?

ALWASH: I can take you on a tour of Karmashia area and Jubaea area and show you the returning refugees who have come back from Iran.

CURWOOD: These people were marsh Arabs who what some of them were systematically exterminated by Saddam Hussein and those who stayed alive are what, in jail, tortured, fled over the border to Iran. Is that who you're talking about?

ALWASH: All of the above. Seventy thousand people have gone to Iran in '92, '93, '94; about 50,000 came to the United States as refugees. A lot of them were displaced and, of course, the mass graves stand as solemn reminders to us of the fate of many of those who did not listen to the central government and wanted freedom.

CURWOOD: So, what are the odds of getting a meaningful restoration of the marshes of southern Iraq or as you folks would say, the original Eden? 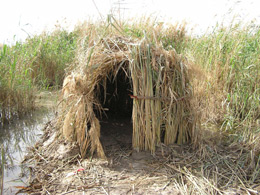 A temporary hut for fishermen in the inner portions of the marsh.
(Photo courtesy of Eden Again/New Eden Project.)

ALWASH: The restoration has already started. We have 30 to 40 percent of the marshes that existed in 1990 alive and well today so it's a reality. Our goal now, obviously, our final goal is to restore the marshes or return as much as possible. Getting it all back is rather not possible. Realistically speaking, I would say if we were to return to 1990 conditions we are 100 percent successful and I'm about 90 percent sure that we can get back to 1990.

CURWOOD: Azzam Alwash started the project "Eden Again." Thanks so much for taking this time with me today.

ALWASH: Thank you for having me.

From the LOE archives: "Restoring Iraq's Garden of Eden"