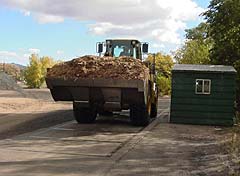 Eric Whitney from member station KRCC in Colorado Springs reports on efforts to turn forest waste into electricity by chopping up dead trees and vegetation and mixing the chips in coal fired power plants.

CURWOOD: Across America, there are tens of millions of acres of forests that are dangerously overgrown with scrub-brush and small trees. Dangerous, because too much of this dried out vegetation can turn what were once healthy and limited natural fires into catastrophic blazes that roar through habitat without regard to homes and property. Removing this overgrowth without clear cutting is expensive. So the hunt is on for ways to find a use for this wood that will help pay for its removal. Eric Whitney of KRCC in Colorado Springs reports on efforts to turn forest waste into electricity.

WHITNEY: In Colorado, it’s easy to find forests that look and feel like they’re about ready to burn.

TOELLE: Yeah, this would be pretty typical, except, the one thing that’s interesting about this, I noticed is, for some reason, there was a lot more pinon back further to the west of us.

WHTINEY: Dave Toelle, a fire ecologist with the federal Bureau of Land Management, or BLM, shows me one such forest on the edge of Canon City. Toelle says the ongoing drought in the West has weakened the pinon pines here, and a beetle infestation has finished off about a third of them. They’re just standing there, dry, combustible and dangerous.

TOELLE: Look how thick it is. With a wind-driven, hot, dry day type scenario, which is pretty typical, we wouldn’t have a chance of doing much with anything in this landscape.

WHITNEY: That means a fire could easily sweep into the forested subdivision next door. So the BLM spent hundreds of man hours cutting down and shredding the dead pines on land next to the homes to create a buffer between the trees and deny wildfires fuel. It’s incredibly labor-intensive work, but it has to be done says the BLM’s Mike Gaylord.

GAYLORD: We’re putting this money into these properties to try to reduce the risk to peoples’ lives and property. This field treatment is very expensive, on a cost-per-acre basis, so we’re looking at all the tools we can, trying to generate a list of entrepreneurs that will enter the business and drive costs down.

WHITNEY: Entrepreneurs are hard to come by. That’s because the overgrown vegetation that needs to be removed for fire safety typically isn’t the big trees that sawmills are willing to pay for. So, nationwide, the federal government is spending nearly half a billion dollars a year to clean up overgrown forests. But even that much money is barely making a dent in fire danger. So a small percentage of the cleanup budget is being used to try and create markets for what is now considered a burdensome waste product. 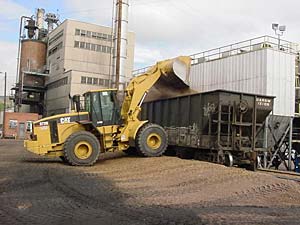 Biomass is weighed and mixed with coal for use to generate electricity for Aquila's Colorado customers. (Photo: Aquila Inc., Colorado Operations)

WHITNEY: One company that’s signed on is Aquila Energy. It runs this mid-sized power plant in Canon City that burns about 500 tons of coal a day. Plant manager Bob Gaines says that last year, the power plant started replacing about three percent of its coal intake with excess wood taken from local forests.

GAINES: There’s two big silos here. That go up about five floors, they hold 300 tons of coal. By the time the wood and coal get here, they’re pretty well mixed. [VOICE FADES OUT]

WHITNEY: The Aquila plant offers wood suppliers the same price as it pays for coal, and that’s motivating entrepreneurs to go out and get the overgrown trees and bring them here. Gaines says adding wood doesn’t reduce the plant’s generating capacity, but it does create some hassles.

GAINES:…And it has to go through the same chain of coal handling chutes and bunkers and things that were designed for coal, not for wood. So if we get too many big pieces it tends to plug up the coal flow.

WHITNEY: The plant also had to amend its state air quality permit when it started mixing in wood. Regulators found that burning wood doesn’t really change smokestack emissions much, but operational changes of any kind at a power plant trigger several weeks worth of red tape to get approval. That’s enough to keep most companies from even considering taking on a new fuel. So if wood is trickier to handle, opens the doors to more regulatory oversight, and is no cheaper than coal, why bother?

GAINES: Well, green tags, or renewable energy credits, are a uh, basically a nationally recognized certification that we are generating some portion of our electricity with renewable energy – in our case biomass, waste wood.

WHITNEY: The green tag certification allows Aquila to sell the renewable portion of what it generates on the open market. And it’s an expanding market. More and more states are mandating that utilities generate some power from renewable sources. If utilities don’t have enough, say, wind farms or hydroelectric power of their own, they look for certified green sources to buy it from. Many government agencies and companies have pledged to buy green power, too. Gaines says that Aquila isn’t sure yet how much their green tags might be worth.

GAINES: We’re still working on the marketing end of this ‘cause it’s fairly new for us. What we intend to do is I think initially look at some of our larger customers and invite them to buy into the renewable energy credits. And there would be a premium, but I don’t know what that would be per kilowatt hour.

WHITNEY: The market for green power in Colorado is poised for rapid expansion. Last fall voters passed a referendum that requires the state’s large utilities to get ten percent of their power from renewable sources by 2015. Utilities get extra credit if the renewable energy comes from an in-state source. So, here in Colorado, there’s potential to stimulate more projects that turn forest waste into electricity.

DETTMAN: Well, we’ll have to see.

WHITNEY: Bob Dettman works for the U.S. Forest Service in Denver. His job is to help people in the five-state Rocky Mountain region find ways to make money from all the small trees being removed to reduce fire danger. Dettman says peoples’ first concern is about air pollution. He says burning wood in a power plant is much cleaner than getting rid of it with far riskier and expensive controlled burns, and certainly cleaner than an out of control forest fire. But Dettman admits to a few roadblocks.

DETTMAN: The technology’s there to burn this wood cleanly. But the economics of cutting it, skidding it, chipping it, hauling it to a site for utilization – that’s the real challenge. We’re putting a lot of focus and emphasis on how can we reduce those costs and make it all pencil out.

WHITNEY: Federal grants and subsidies, and tradable green power certificates, have made burning wood for electricity pencil out for the power plant in Canon City, where plant manager Bob Gaines is working his way through this 800 ton pile of wood chips.

GAINES: This is ideal, right here. That’s perfect size stuff. The thing that gives us fits are the little half inch and one-inch diameter Ponderosa branches.

WHITNEY: Gaines is optimistic that his plant will continue to burn wood even after the subsidies run out.

GAINES: I’m starting to get phone calls now, ‘hey, I’ve got wood’. And right now I can't take it. So, I think the supply situation is changing and as we get to where we can burn more wood, we’ll help generate more supply, really. Just ‘cause there’s a market. So, it's evolving. It is changing from month to month, and it seems to be getting better. We've been kind of pushing it for four years or so…and now it’s starting to take on some momentum of its own, which I’m kind of glad to see.

WHITNEY: Whether that momentum will carry over to other coal fired power plants depends on a lot of variables. New pollution restrictions on burning coal, or higher natural gas prices, could make wood power more cost competitive, as could a growing market for renewable energy certificates. But for now, there are just a handful of power plants burning wood in the U.S. Federal officials hope that this one in Canon City, Colorado, will serve as a role model for turning forest waste into a new energy source.