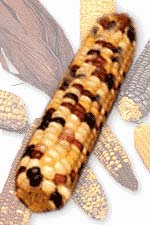 Recently leaked information showing that rats fed a Monsanto corn variety may have developed kidney and blood problems is sending ripples throughout the European community. The questions raised from the study could further jeopardize the altered corn’s release in Europe. A recent European Union vote left the matter undecided, and further action is expected later this year. Dr. Brian John from the organization GM Free Wales spoke to host Steve Curwood about the study and about Europe’s view of GM food. The interview is followed by a discussion with Mark Schapiro of the Center for Investigative Reporting, who talks about the process of approval for GM products in the American market.

CURWOOD: An internal study by the Monsanto Corporation showing kidney and blood abnormalities in lab animals fed it’s genetically engineered corn is stirring controversy in European Nations set to vote on approval of the product later this year. The study was leaked to the British newspaper The Independent on Sunday. The genetically engineered corn called MON 863 is designed to ward off damage from rootworm: a voracious pest. The Monsanto corn is already widely grown in the United States. Application has been made to the European Union for approval of MON 863, but an OK is on hold due to calls from European scientists for Monsanto to release the full one thousand-page report for public scrutiny. Among them is Dr. Brian John of the organization GM-free Wales. Dr. John, tell me why is MON 863 a cause for concern?

JOHN: Well it could be dangerous because the clinical people that we’ve spoken to say that the sort of signs that are occurring in the rats, that these are very possibly pre-cancerous conditions. What they seem to be doing is there seems to be something that is causing changes to the immune system. And that, of course, when that happens, the defensive mechanisms start to kick in, and the down-the-line consequence of that may be a cancerous growth. Now, we don’t know what these links are or what the chain of events may be, but we know enough about this sort of thing to be extremely worried. And that’s why we’re arguing that great caution has to be used before, you know, before this product is assumed to be safe. It may be safe, but a great deal more science has to be done, and it has to be put in the public domain before we can come to that conclusion.

CURWOOD: Can you describe for me the process of how a genetically engineered food product is approved in Europe?

JOHN: Each nation state has its own advisory bodies which actually assess applications and comment on them when they’re submitted. And then the comments all go forward to Europe-wide bodies. In the case of MON 863, the application goes to a committee called the European Food Safety Authority.

JOHN:…and they take the comments from all the different national bodies, look at all of them. They may ask for particular pieces of research to be done by the applicant, in this case Monsanto. And then they sit down and come up with a piece of advice saying either that this product is OK, or that it’s not OK. And this advice then goes through to the commission, and again, it has to be approved by the member states of Europe. And in the case of MON 863, the member states have not yet been able to come to a view on it, because there is widespread disagreement about how safe it is.

CURWOOD: What would you like to see happen as a result of all this controversy over this genetically modified corn in Europe?

JOHN: I would like to see some decent science done, for a start, with genuine peer review, and comprehensive studies undertaken as to the effects of genetic modification on plants which are going into the food chain.

CURWOOD: That’s Doctor Brian John from the organization GM-Free Wales. And joining me now is Mark Shapiro at the Center for Investigative Reporting. He’s written extensively about the Genetically Modified food industry. Um, Mark, if I have a new genetically modified product I want to bring to a market here in the United States, where do I go to get approval?

SHAPIRO: You have to go to the USDA, which will review your new product, and if your new product contains its own insecticide – if it contains a poison that’s going to poison a pest – then you have to bring it to the Environmental Protection Agency. And the Environmental Protection Agency relies on studies conducted by the companies themselves as to the toxicity of your particular new variety in the field.

CURWOOD: Now what about the food safety issue? Do I have to take this to the Food and Drug Administration to get approval to sell it to the public as a foodstuff?

SHAPIRO: The answer is no. The FDA has what it calls “voluntary safety consultations” with the biotech companies. And they review, periodically, the safety data supplied by the companies. But not once over the past ten years has it refused to permit development of new GE crop varieties to move ahead.

CURWOOD: Now, what percentage of crops in the United States are genetically modified?

CURWOOD: Why is risk-assessment so weakly funded in the United States? Why don’t academics look at the effects of genetically modified crops coming into our food system?

SHAPIRO: The USDA, which is the primary funding mechanism for research on crops, does not officially consider genetically engineered crops to be any different from any other kind of crop. This is very important, philosophically, that there is in the United States government a belief that there is no difference between the genetically engineered crop and the traditional crop.

CURWOOD: What would happen if it was determined that a particular genetically modified crop wasn’t safe? What would that do to our agricultural production?

SHAPIRO: It would have devastating impacts on American agriculture because genetically engineered food is so embedded now in our agricultural system that the very idea that this type of crop could actually have serious health effects would truly unravel a system that has emerged over the past ten years that has grown increasingly reliant on genetically engineered food.

CURWOOD: How responsible are we in the press being to report this? If this is just a single study that may be in fact way out of whack?

SHAPIRO: Well, I think it is possible to overstate the significance of this report. And I think the significance of the report needs to be understood in this context – that with the extreme scarcity of actually reliable data about the risk from genetically engineered crops, and the extraordinary efforts that some of the manufacturers of these crops have made to control the course of research in American universities in particular – that that has created this paucity of information. The press has not adequately covered how substantial the introduction, how substantially the introduction of genetically engineered food has altered the American agricultural system. And now when we come upon a study like this, there’s kind of an electric response. As opposed to have been covering it over time, now it seems to kind of jump to the head of our attention.

CURWOOD: Mark Shapiro is with the Center for Investigative Reporting. Chris Horner, a spokesperson for Monsanto told us that while the research in question has not been reviewed by any U.S regulators, MON 863 has been approved in the country by all relevant agencies as well as by the Canadian government. He also told us that the MON 863 corn study is not secret, it was provided in full to regulators in the European Union and scientists who have looked at it say the quote ‘abnormalities are reasonable statistically and not outside the norm.’

The Independent's article on Monsanto study