Governor Arnold Schwarzenegger recently signed an executive order to drastically reduce California's greenhouse gas emissions by 2050. He made his announcement in San Francisco, at an international meeting of mayors for World Environment Day.

CURWOOD: I’m Steve Curwood. Another state, another republican says its time to do what the federal government won’t do. California Governor Schwarzenegger calls for massive cuts in greenhouse gases to offset global warming.

SCHWARZENEGGER: As of today, California’s going to be the leader in the fight against global warming.

CURWOOD: To ward off climate change the race is on for energy that does not produce greenhouse gases and that has the environmental movement taking a second look at an old foe - nuclear power.

KRUPP: If we believe that global warming is very serious, the overriding environmental issue of our day, then I think we have to have an open mind about nuclear power. And we should not just throw it off the table from the get-go.

CURWOOD: Those stories and more - this week on Living on Earth. Stick around.

ANNOUNCER: Support for Living on Earth comes from the National Science Foundation and Stonyfield Farm.

CURWOOD: From the steps of City Hall in San Francisco, this is Living on Earth. I’m Steve Curwood.

SCHWARZENEGGER: As of today, California’s going to be the leader in the fight against global warming.

CURWOOD: On June 1st California Governor Arnold Schwarzenegger came to a gathering of mayors and environmental officials at the United Nations World Environment Day to make a very public break with the Bush Administration over climate change.

Taking pen in hand to sign an executive order, he set California on a path to catch up with, and then pass, the benchmarks set to reduce global warming gases under the international Kyoto Protocol. 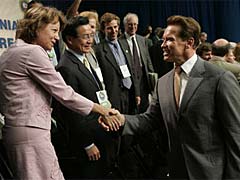 CURWOOD: Scientists say such deep cuts are needed to keep the effects of climate disruption at bay. The Schwarzenegger order only effects activities of state agencies, and needs legislative approval to impose it on the broader California public. Still, as leader of one of the world’s largest economies, Schwarzenegger’s move amounts to a direct challenge to the White House, which opposes mandatory caps on carbon emissions.

SCHWARZENEGGER: I say the debate is over. We know the science. We see the threat. And we know the time for action is now.

CURWOOD: Governor Schwarzenegger says he will stoutly defend the California law setting greenhouse gas emission limits for cars that’s being challenged by the auto industry, and promote conservation and the production of carbon-free energy. To do less, he says, would amount to the betrayal of future generations.

SCHWARZENEGGER: Decades past and we brought this damage to the world around us. We did not know any better. That was our mistake. But now we do know better. And if we don’t do anything about it, that will be our injustice.