San Francisco plays host to this year's World Environment Day, and organizers hope to use the occasion to spur the mayors of the world's largest cities to take concrete steps toward making their metropolises more environmentally sustainable. Host Steve Curwood talks to Jared Blumenfeld, who directs the city's Department of the Environment, about what those steps are and how viable they might be.

CURWOOD: Those last comments come from Jared Blumenfeld. He directs the San Francisco Department of the Environment, and is one of the lead organizers of World Environment Day. We caught up with Mr. Blumenfeld outside City Hall to discuss the aim of the event, and how San Francisco hopes to set an example as a city committed to a green urban environment.

So, Jared Blumenfeld, you're hosting mayors from all over the world for World Environment Day, with a focus on urban environmental concerns. What do you want them to know about San Francisco?

BLUMENFELD: What we want them to know about San Francisco is that we're committed to a path of sustainability, but we don't have all the answers. So part of why we want them to come to San Francisco is to learn about all the cool things we're doing, from recycling to green building to solar power. But really, why we're bringing them here is in the spirit of the UN that was created here 60 years ago, where we had 50 founding delegates. We want people to come here and really share their ideas and vision for how we can create urban centers that are sustainable.

BLUMENFELD: Actually, one of our donors, Swinerton has bought greenhouse gas credits for us, so hopefully we'll end up climate neutral from a climate perspective. But you know, obviously, all these conferences we try to keep it small. So I was very involved in the Rio Earth Summit where they had you know, tens of thousands of people. We wanted just the key mayors and a few of their staff to come together. We wanted to keep the ecological footprint of World Environment Day as minimal as possible. All the meals will be organic, all the meals and events will be zero-waste, so we know nothing will be going to landfill, and all the transportation will be in alternative fuel vehicles, and some of them in things like a $4 million dollar hydrogen fuel vehicle that another transit agency is lending us. So we're really trying to make the event a statement in and of themselves.

CURWOOD: What do you mean by small, and how did you pick the mayors?

BLUMENFELD: Basically, we wanted to invite the largest cities on the planet. So we worked with the UN to pick the largest 100 cities on the planet, and that was our first cut. The next cut was cities like Curitiba that are doing amazing environmental things that we thought we could really learn from. But the 100 that we started with were cities that are just large, that have huge conglomerations of people, some of them in China up to 32 million people, they're like nation states. And we said, you know, it's great to have small little towns like Brattleboro, Vermont that are doing interesting environmental things, but we have to get the big guys involved, otherwise we're not going to save the planet.

CURWOOD: So how the heck do design a World Environment Day? 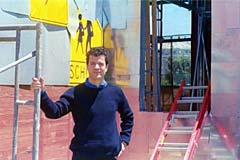 BLUMENFELD: How we started off was to look at what others had done. But there was no consistency, and kind of like Earth Day in the US, it had lost its buzz, it had kind of gone flat, people celebrated it and it was a big thing, but nothing really ever happened from one year to the next. So the first thing we wanted to make sure was that it was relevant, it had some legacy that went beyond the conference itself. The second thing is that, we wanted to identify a political audience that could be catalysts for change, agents for change, that were not traditional, that were grassroots, that could be held accountable. And as we found out more and more about the demographic shifts in the planet towards cities, and the fact that more people live in cities, we were like, wow, we should invite mayors.

CURWOOD: So you wanted this gathering to have some sort of impact after it happens. How are you going to do that?

BLUMENFELD: So the way we're going to have impact after it happens, after World Environment Day happens, is through a document that we developed called the San Francisco Urban Environmental Accords. And it's basically 21 simple actions that each city can take, and we want them to take them within a seven-year period. And we said, we don't want it to be open-ended, we don't want it to last forever, we want them to do something now. Simple things they can do. And so we developed this checklist.

And what we're hoping is that mayors come together and work together, and rather than have a big plenary session, we're having sessions that are done in what's called World Café style. So we'll have four mayors sitting together, and we'll have probably 200 people in the room, so there'll be lots of different little tables, and they'll all be talking about a common issue: How do you deal with recycling? What are the policies that you've adopted? What are the financial incentives? How do you work with businesses to make this happen? And so then they'll start building networks.

CURWOOD: How did you pick the 21 points?

BLUMENFELD: We worked very closely with the University of California at Berkeley, and with an environmental group called the International Council for Local Environmental Initiatives, to come up with a set of concrete actions that had been taken by at least one city. So each of the 21 actions in the Urban Environmental Accords that the mayors will sign have been taken by one city. We didn't want to invent things that no one had done before. We started with energy, then we went to transportation, urban planning, urban nature, things like trees and parks, water, and they're things that every city has to deal with.

CURWOOD: Jared Blumenfeld is director of the San Francisco Department of the Environment. Thanks for taking this time with me today.

BLUMENFELD: Absolutely, Steve, it's been a pleasure.


San Francisco Department of the Environment