The Arroyo toad of southern California has been getting a lot of attention with John Roberts’ nomination to the high court. Roberts wrote about the “hapless” toad in a controversial opinion. It's not the first time the toad landed in court and it won't be the last. Ilsa Setziol from member station KPCC in Los Angeles reports that a series of legal battles may determine the fate of this fragile amphibian.

YOUNG: As we’ve heard, a little toad has been getting a lot of attention with John Roberts’ nomination to the high court. The “hapless” toad Roberts wrote about in an opinion is the Arroyo toad of southern California. It’s not the first or last time the toad will land in court. Reporter Ilsa Setziol from member station KPCC in Los Angeles reports that a series of legal battles will determine just what will be done to protect this fragile amphibian.

SETZIOL: As the sun sets in southern California’s Angeles National Forest, Little Rock Creek grows dark in the shadows of a steep canyon. An amber light catches the creamy blossoms of tall yucca plants and makes them glow like candles.

SETZIOL: Arroyo toads have lost at least 75 percent of their habitat to development, dams and water diversions. Little Rock Creek is one of the few places they survive. Ramirez heads upstream a couple of miles. As the light fades, the sound of tree frogs crescendos into a chorus.

SETZIOL: Ramirez takes out a flashlight to search for Arroyo toads. He spots them by the way their eyes shine in the light. Before long he picks up a two-inch toad about the color and texture of an oatmeal-raisin cookie, with tiny toes and big, liquid eyes.

SETZIOL: Arroyo toads spend their days buried in moist sand. Only at night do the adults become active.

RAMIREZ: What he’s doing right now is a release call, because I’m compressing him a little bit on each side as though I’m trying to amplex him for breeding. And he’s a male and he’s basically saying, ‘get off me, I’m a male not a female’. It’s a release call.

SETZIOL: Amplexus is the technical term for toad nooky.

RAMIREZ: So, he’ll go down tonight and do some soaking. He’ll definitely forage tonight, looking for some ants. And I wouldn’t be surprised that he would find a nice spot and let off some advertisement calls tonight, just trying to get some female’s interest.

SETZIOL: Ramirez says when the creek dries up, the toads will burrow deep into the ground, and slip into a summer version of hibernation called “estivation.” They’ll emerge again when it rains.

SETZIOL: She looks for Arroyo Toad tadpoles in a stretch of the creek where toads used to live. They’ve disappeared because the state releases unnaturally high amounts of water in the summer from an upstream dam. California’s Water Resource Agency is proposing to fix the problem. Sandburg says it’s one of the few hopeful signs in an otherwise bleak future for the toads.

SANDBURG: As I see it, no recovery efforts have been attempted yet. We’re still trying to prevent loss of existing habitat.

SETZIOL: It took a lawsuit from an environmental group to force the government to establish critical habitat for the toad in the first place. But another lawsuit changed that dramatically. The U.S. Fish and Wildlife Services recently cut back the amount of land designated as critical habitat for the toad: from more than 180,000 acres four years ago, down to fewer than 12,000 acres.

The agency did so in response to a lawsuit from southern California homebuilders who said Fish and Wildlife had underestimated the economic impact. A federal court sided with the building industry. Andy Henderson, legal counsel for the Building Industry Association of southern California, says the reduction in critical habitat will benefit regional planning efforts.

HENDERSON: If critical habitat is designated too broadly you can wind up with a situation where landowners would have no incentive to participate in regional planning of the type that would set aside habitat to benefit not just one species, but many.

SETZIOL: The revised habitat designation left out large swaths of southern California that are slated for development, although some areas may get protection under regional preservation plans. Sandburg takes issue with the federal government’s revised economic analysis.

SANDBURG: As far as I’m concerned, it was a sort of economic voodoo where economists, they calculate the goods and services that they obtain from an area, but they forget to, they don’t include the inherent value of the area itself.

SETZIOL: Fish and Wildlife won’t talk about the issue. They’re on notice that another lawsuit is coming from environmental groups. The Service generally downplays the importance of critical habitat designations, saying most of the protection for an imperiled species comes through other means.

SETZIOL: With night settled in the Angeles National Forest, Arroyo toads advertise for mates. The males let out a soft buzzing trill. 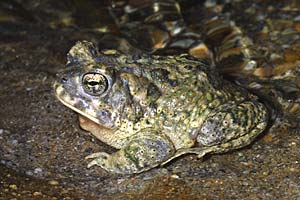 SETZIOL: Even with changes in the habitat designation, biologist Ruben Ramirez says his experience with the Arroyo toads gives him hope that they’ll survive the rapid urbanization of southern California.

RAMIREZ: What fascinates me is because I’ve been studying them for so long and every year they continue to prove me wrong in what I think they’re capable of. I find them moving up slopes where I didn’t think they could move. At least it gives me hope that with a little proper management we can help them rebound. And they’re just a beautiful animal. [LAUGHS]


About the Arroyo Toad