An elephant orphanage in Nairobi, Kenya has perfected the art of raising baby elephants and releasing them back into the wild. Living on Earth’s Susan Shepherd reports.

CURWOOD: It’s Living on Earth, I’m Steve Curwood. In many parts of Africa, elephants are vanishing. In the 1980s alone, half the population was killed by poachers and that prompted a worldwide ban on the sale of ivory tusks. Today, only 600,000 or so wild African elephants remain, out of, perhaps, ten million, two generations ago. But the killing hasn’t stopped, as there is still plenty of commerce in illegal ivory as well as elephant meat.

Slaughtered elephant herds often leave behind orphaned, baby elephants, which have little chance of survival. That is, unless they happen to wind up in a baby elephant nursery, like the one visited by Living on Earth’s Susan Shepherd in Nairobi National Park, Kenya.

SHEPHERD: Keeping an orphaned elephant under two years of age alive is a tricky proposition under even the best of circumstances. Thirty years ago, it was a near impossible task.

SHEPHERD: Nothing keepers like Daphne Sheldrick fed infant elephants kept them from suffering the same fate--starvation.

SHEDRICK: When they first come in, they all just want to die. They’ve lost their elephant family; they are very, very fragile in infancy. And they can be fine one day and dead the next. It took me 28 years to succeed in raising an infant African elephant.

SHEPHERD: The role of animal protector is one 70-year-old Daphne Sheldrick prepared for all her life. Born in Kenya, she grew up on a farm in the highlands and cared for her first orphaned animal, an antelope, when she was three years old. In her early 20s, she moved to Tsavo National Park in Southeast Kenya, where her husband was game warden and she spent 30 years there learning about the psychology and sociology of elephants.

SHELDRICK: You know, when you take on an elephant it really is a lifetime and I’ve been working now with elephants for 50 years.

SHEPHERD: The key to keeping baby elephants alive, says Sheldrick, was finding the right formula to feed them. They couldn’t digest the fat content in most milk formulas, though no one knew that was the problem until Sheldrick stumbled on something that worked through sheer luck and trial and error. The secret elixir was a mixture of coconut oil added to a fat-free milk base.

SHELDRICK: I found that they could live longer on skim milk, so I knew the problem was the fat.

SHEPHERD: This eureka moment was the start of the Elephant Orphan Project in Nairobi National Park, where Sheldrick convinced the government to allow her to set up this orphanage nearly 30 years ago.

SHEPHERD: On a bright, warm day in Kenya, young elephants romp in a dusty clearing. They are the current crop from the more than 60 young elephants that have been brought here over the years. 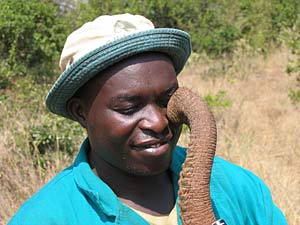 SHEPHERD: Edwin Lusichi, their 27-year-old keeper, says they are thriving.

SHEPHERD: This is a boy?

SHEPHERD: The baby elephants spend their days chasing each other, rolling in the red clay soil, butting their heads up against anything they can find, especially against their keepers who are more like nannies.

LUSICHI: I’ve been here for the past five years and it’s just because I like animals in general. That’s why I landed, getting this job.

SHEPHERD: And, that’s the other key to keeping orphaned elephants alive. Elephants are such social creatures that they need constant company. Their keepers stay with them 24 hours a day, which means curling up right next to them to sleep at night.

LUSICHI: This elephant is called Lualeni. He’s about five months now, was rescued from Tsavo East. Just found lying alone in the park.

SHEPHERD: As Lusichi talks, one of the smallest elephants in the group puts the end of her trunk against his round, good-natured face and touches his nose, his cheek and then covers up his eye with her nimble snout. Lusichi, removes her trunk gently from his face, laughing. Then she comes after my microphone.

SHEPHERD: What is he doing now?

LUSICHI: Just suckling for my fingers.

SHEPHERD: Sort of like when a kid sucks his thumb?

LUSICHI: Yeah. They are just like human babies, actually.

SHEPHERD: Not every baby elephant brought to the nursery survives. And, it’s nearly impossible to tell which ones will make it. As Lusichi explains, all of them are traumatized from being separated from their mothers, or witnessing the massacre of all of the older elephants in their herd.

LUSICHI: There is always difficult to handle when they are new because they have been in the wild and they only know the wild life. And, they saw the human poaching the mothers so they won’t be friendly to you. It takes some time. So, it’s quite a difficult job to handle a newcomer in the nursery.

SHEPHERD: Lusichi tells the story of the two-day old elephant he helped rescue last summer. They named her Wendy, which means hope because she seemed much too young to possibly survive.

LUSICHI: She was just found lying alone in a swamp. She was still fresh from the mother’s womb. All the body was very soft; the ears were still very pink. In fact, she had part of the ear folded to one side. And, just getting hold of her you, you could feel she was very slippery. She would want to fall down and very, very tiny, the tiniest I’ve ever seen.

SHEPHERD: And so, could you pick her up?

SHEPHERD: It takes about $750 a month to care for a baby elephant. The money comes mostly from donations–-people around the world foster these elephants. Daphne Sheldrick says most of that money pays for the 40 pints of formula a day it takes to feed one of these infants. 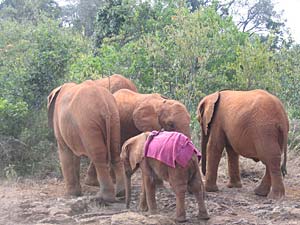 SHELDRICK: A lot of people say, ‘well, that’s a lot of money to spend on a few little orphaned elephants.’ But what they don’t understand is that these elephants are tremendously valuable for extending the knowledge about elephants because when you raise an animal like an elephant, you learn how it feels and thinks. You know it as well as your own human children.

SHEPHERD: When the elephants turn two, they are trucked to Tsavo National Park and are gradually re-introduced into the wild. Elephants are housed and fed at a holding site and keepers take them on long walks to introduce them to roaming wild herds. Generally quite gregarious animals, the wild elephants almost always welcome the orphans. Their keepers think life in the wild is more stimulating than living with humans, so eventually, almost all of the young take up with a herd. Still, Sheldrick says, many of the orphans return to the holding area on a regular basis.

SHELDRICK: Another one of our females brought back a calf that had a snare around its leg, this is a wild-born calf. And of course, it was wild. Our keepers couldn’t actually handle it and it was tearing around. And, Lisa, the mother, just walked into the stockades and started feeding. The calf was screaming its head off and any mother elephant normally hearing that sound would have gone bizerk, but she trusted the keepers so much that she just went on quietly feeding. And then, the other orphans surrounded this calf and sort of held it, in the middle, so it couldn’t escape so that our keepers could crawl underneath their bellies and remove the snare from that leg. And, that just shows how intelligent elephants are that they can reason and think.

SHEPHERD: Yet, Sheldrick is the first to say that her orphanage doesn’t replace elephant families. Elephants are so smart and so complex that most people who study them say we don’t know the true trauma they face when they’ve known the violent death of a family member and lose their communities. And, because we can’t know, Sheldrick does what she can to give back to these creatures, what they’ve given to us.

SHELDRICK: Recent stories about the Tsunami in Indonesia, where the elephants knew the moment the earthquake happened under the ocean and started fleeing up hill. And, as they were going, they were picking up people and putting them on their backs and saved a lot of human lives, as well. So, they are incredible animals and that raises a lot of questions of how they should be treated.

SHEPHERD: Surrounded by the elephants living in her orphanage now and the memories of elephants she’s saved over a lifetime, Sheldrick basks in the knowledge that she’s done everything she can for these elephant children who fill Africa, as Kipling wrote, with their insatiable curiosities. For Living on Earth, I’m Susan Shepherd in Nairobi, Kenya.