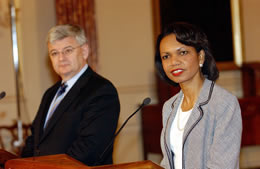 Joschka Fischer, with U.S. Secretary of State Condaleeza Rice in June 2005, will lose his post as Germany’s Foreign Minister and also step down as head of the Green Party. (Photo: Michael Gross, State Department)

In Germany, the Grand Coalition is in, and the Red-Green Coalition is out. Mark Hertsgaard of The Nation magazine talks to Living on Earth host Steve Curwood about the political and economic climate that led to the uneasy new coalition between the conservative Christian Democrats and the liberal Social Democrats, and what may lie ahead for the ousted Green Party.

With me now to talk about this turn of events in Germany is Mark Hertsgaard. He's the environment correspondent for The Nation magazine, and he just got back from Germany. Mark, welcome back to Living on Earth.

Joschka Fischer, with U.S. Secretary of State Condaleeza Rice in June 2005, will lose his post as Germany’s Foreign Minister and also step down as head of the Green Party. (Photo: Michael Gross, State Department)

HERTSGAARD: Thanks for having me, Steve.

CURWOOD: First, give us a look back at what happened in the September election. What were the main issues during the campaign leading up to the elections? And how did the Greens go wrong?

HERTSGAARD: The Greens, I suppose, went wrong by being the junior partner to the SPD, the Social Democratic Party of Germany, led by Gerhard Schroeder who had campaigned on a promise to dramatically cut unemployment in Germany. And Germany has remained mired in deep, widespread, chronic unemployment. And that was by far the biggest issue of this campaign, and it's why the Red-Green coalition fell.

Although it should be noted, Steve, that everyone in Germany expected the conservative coalition to dramatically beat the SPD, and that didn't happen. It was pretty much of a draw. And so that's why we now have in Germany this so-called Grand Coalition government between the conservatives and the Social Democrats that, frankly, neither side is very happy about.

CURWOOD: The Greens themselves did okay in the election, right? In fact, they had a little larger margin than they had seven years ago, right? There was like, about eight percent?

HERTSGAARD: Yeah, they went up from six point seven percent to eight percent.

CURWOOD: But some say that maybe the Greens hurt the Social Democrats because some of the measures they're calling for may have been seen as actually aggravating the unemployment problem. You know, putting pressure on shutting down coal mining, talking about getting rid of the nuclear power plants, that sort of thing.

HERTSGAARD: I really don't see that. I think that vote was very strongly against the SPD government above all. Gerhard Schroeder, the SPD chancellor, had promised very visibly that he was going to reduce unemployment. When he came into office it was three million, he promised to bring it down. And, in fact, here at the end of his seven years as chancellor, it was up to five million, nearly, and I think given that, it was very hard for him to get return to power.

And the Greens, for that matter, actually make a very strong argument that their environmental policies have actually added jobs in Germany, especially through their landmark legislation, the so-called Renewable Energy Sources Act. And this commits Germany to a massive increase - using market mechanisms, largely - a massive increase in solar, wind, biomass and other renewable energies that have already got 150,000 workers in those industries. And the promise of many more through future exports because that Renewable Energy Sources Law has been copied, at least in part, by 41 other countries, including China, which, of course, is going to be buying many billions of dollars of energy technology in the years to come.

So I don't thing the Greens really hurt the SPD reelection chances there. It was really Gerhard Schroeder's own doing, I'm afraid.

CURWOOD: The Greens' popularity has ebbed and flowed during the seven years that they were in that Red-Green government. I'm thinking at one point the Green foreign minister sent troops into Kosovo - Greens are pretty pacifist - and yet, of course, he opposed the U.S. in Iraq. In this process, to what extent did the Greens loose their political voice, the sense of who they are? Who are the Greens these days?

HERTSGAARD: The Greens are evolving. They were founded 25 years ago as a pacifist, feminist, ecological party. Of course, coming into government seven years ago, they have had to do some compromising. And no compromise has been more difficult for the party itself than over the transformation of Germany's foreign policy.

The Greens did control the foreign ministry. They had Joschka Fischer, the foreign minister, longtime co-founder of the Greens, and he actually got pelted by a paint bomb at a Green Party Congress after pushing through the use of German troops in peacekeeping missions in Kosovo and Afghanistan. Many of the more left elements of the party did not like that.

However, then a few months later, it was Fischer who really led the European opposition to the Bush administration's drive to war. And Fischer, indeed, became the single most popular politician in all of Germany. And that's going to be a challenge for the Greens now as they go forward, because Fischer has taken himself out now of the party leadership, saying it's time for a new generation to write the next chapter in the history of the Green Party.

CURWOOD: You know, Mark, for a while it looked like Angela Merkel, who's now the new chancellor, was going to try to reverse the Red-Green agreement to phase out nuclear power by, what, the year 2020? Now, she wasn't able to succeed with that plan. What happened?

HERTSGAARD: Yes, Angela Merkel campaigned on the idea of slowing down the nuclear phase-out. She wanted to continue a German nuclear industry. She said there's going to be nuclear exports to China, and India, and elsewhere, and "as a patriot," she said, "I want those to be German exports."

But, when there were the negotiations in November around the new coalition government-- between the SPD and the CDU, the conservatives--her position did not prevail. The SPD, the Social Democrats, had already been given the environment ministry, and they were not going to retreat on the atomic phase-out, and therefore the phase-out of nuclear power in Germany will proceed. It's expected to be completed by the year 2020.

CURWOOD: What do you see as the big environmental challenges facing this new coalition government?

HERTSGAARD: I think the big environmental challenge facing the new coalition government in Germany is going to be to maintain environmental quality and standards and vision at the same time that they are digging their way out of a major economic crisis. You've got five million, almost five million, Germans unemployed - especially high unemployment in the former East Germany - you've simply gotta do something about that. No government is going to stay in power if they don't tackle that problem. And, of course, the temptation is always to cut corners on environmental matters in the name of economic prosperity, and I think that will be the great, great challenge facing this new government in Germany.

CURWOOD: Mark Hertsgaard is the environment correspondent for The Nation magazine. Thanks, Mark.