U.S. Under Pressure at Climate Talks 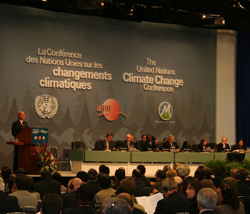 Montreal hosts two global meetings on climate change. Living on Earth host Steve Curwood was there and found that much of the focus was on United States involvement.

CURWOOD: This is Living on Earth. I’m Steve Curwood at the United Nations Climate Change Conference in Montreal, Canada.

This French-speaking city of three million along the St. Lawrence was quick to volunteer to host the first official meeting of the parties of the Kyoto Protocol, which became international law last February. After all, almost twenty years ago Montreal hosted the talks that resulted in the banning of chemicals that destroy the Earth’s ozone layer.

Even though the United States pulled out of the mandatory Kyoto rules to limit greenhouse gas emissions, the U.S. is still part of the original treaty to fight global warming. Many, including the Canadian government, thought bringing the talks to America’s backyard might help bring the U.S. back into the process.

So, some ten thousand people converged on Montreal as November came to a close, and along with the diplomats came the engos, bingos and ringos. That’s how folks here refer to environmental, business, and research non-governmental organizations.

CURWOOD: Actually, two meetings are going on here at the same time, and in the same space: one, the first gathering of Kyoto signatories, with the U.S. sitting in as an observer. The other, the eleventh conference of the parties of the UN Framework Convention on Climate Change, with voluntary greenhouse gas limits, and with the U.S. officially at the table. It sounds complicated, but I found one woman who put it in perspective.

CLAUSSEN: I guess you could say Kyoto is the child and the framework convention is the mother, and they both have a role here.

CURWOOD: Eileen Claussen, now head of the Pew Climate Change Center, led the climate negotiations for the Clinton White House. She says the Bush White House has gone from opposing Kyoto to objecting to any formalized discussions on climate change.

CLAUSSEN: The United States essentially declared the child persona non grata in the U.S., but more disturbing, they seem to be wanting to go after the mother also. In other words, the mother is okay as long as she doesn’t do anything. But if the mother starts to consider how she might get involved in emission reductions, the United States has said they are opposed to any discussions about the future under the framework convention. 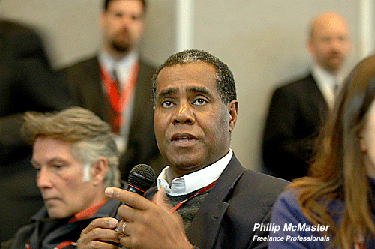 CURWOOD: Just about all nations, including China, India and the United States, have signed on to the framework, but countries like Japan would like to see it enforced before agreeing to make further cuts themselves under the tougher regime of Kyoto. Paul Martin, prime minister of Canada, urged all nations to get fully involved. 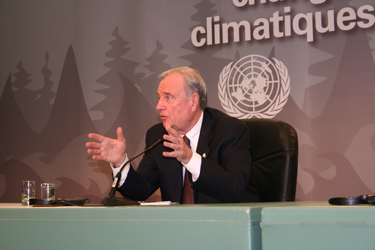 CURWOOD: The American delegation was not only under pressure from a number of nations, but hundreds of U.S. citizens and U.S. elected officials also came to Montreal to urge progress. The catastrophic hurricane season seemed to be one motivator.

CURWOOD: Jerome Ringo, chairman of the National Wildlife Federation, was elected to head a delegation of environmental activists that met with the U.S. negotiating team. The Bush delegation’s arguments that climate change treaties could hurt the U.S. economy didn’t make much sense to Mr. Ringo, who says he’s already witnessed the price of inaction.

RINGO: The cost is new Orleans, the cost is Biloxi, Mississippi, the cost is Lake Charles, Louisiana, 400,000 jobs impacted, people displaced all over this country. Families are separated, cities are bottom up right now. Mayor Nagin is on a campaign to try to bring people back to New Orleans, and many of the evacuees are saying come back to what?

CURWOOD: Members of Canada’s Inuit Nations also came to the talks. They presented research showing rapid warming of the arctic that is melting permafrost, ice, and putting people as well as large animals of the north, such as polar bears, at risk. And then one of their leaders, Sheila Watt-Clouthier, posed a question:

WATT-CLOUTHIER: How would you respond if an international assessment that was prepared by over 300 scientists from 15 countries and that wove into it the indigenous knowledge throughout the entire process concluded that your way of life, that your age-old culture and economy, was doomed and that you might become just a footnote in the history of globalization? What would you do?

CURWOOD: Frustrated by the U.S., she said, the Inuit have filed the equivalent of a lawsuit with the Organization of American States. The Inuit charge that U.S. inaction on climate matters amounts to abuse of their human rights.

CURWOOD: It’s easy understand the impatience of people whose lives have been directly affected by global warming. The Kyoto extension of the framework convention took almost a decade to go from proposal to international law, with at least four of those years mired in the minutiae of comma placement and definitions. This year in Montreal most of the outstanding issues were settled, including the contentious enforcement mechanisms. But with the first phase of limits under Kyoto scheduled to expire in 2012, there’s been a lot of pressure to get moving on the next phase.

CURWOOD: In the past, the U.S. and other governments were dragging along the business community at these talks. Now, many businesses are trying to bring along the governments, saying, among other things, delay is hurting their ability to, well, make money. Mandatory limits on carbon dioxide and other greenhouses gases also created a market to trade carbon, and James Cameron, the CEO of Climate Change Capital, an investment firm in London, says he is looking for stability.

CURWOOD: What happens if you don’t get what you want, what you say you need out of this meeting?

CAMERON: The carbon market is easily spooked at the moment because it is a relatively small relatively illiquid marketplace. It’s heavily dependent on policy signals, and so if they are disappointed by lack of progress on a long term signal, or the institutions are not fixed then they will discount carbon price in the future, and that will be bad news for investment in this area.

CURWOOD: With the United Kingdom holding the presidency of the European Union, the British Secretary of State for the Environment, Margaret Beckett, led the EU at Montreal. Privately, other members of the EU accused her of letting the U.S. off the hook for promises it made earlier this year at the G-8 summit. They say to keep those promises a timetable needs to be set. I asked her about it at a briefing.

CURWOOD: Madame Secretary, how soon do discussions about what will happen in the next commitment period, how soon must those really end in order to keep business on track here and confident that there will be a viable and robust carbon market?

BECKETT: I would like to see something coming out of this meeting to which there is general consensual agreement. I am not one of those who has come here thinking that there are dates and figures and precise structures to which everyone must be signed up. What we have to try to do is to create as much common ground as possible to take as many countries as possible with us. And to me that argues for being open, flexible and cooperative, not coming here and saying here’s my blueprint, here’s my template, just sign on the dotted line.

[MEGAPHONE VOICE: Roll up everybody]

CURWOOD: That European Union's soft approach prompted some Environmental activists to poke fun at the EU, calling it the fossil of the day. The daily ceremony in the convention hall involves a radio-controlled toy truck buzzing around flying the national flags of the perceived offenders.

[MEGAPHONE VOICE: Now in first place for being reluctant to put an end date to the negotiating process being started on post 2012 on targets for the developed countries. In first place, the European Union and its member states...]

CURWOOD: But others say one reason the EU isn’t putting that much pressure on the U.S. is because many of its members themselves have fallen behind in their Kyoto targets. Tony Juniper is head of Friends of the Earth in the UK.

JUNIPER: In the UK we're having real difficulties meeting not only the Kyoto accord but also what we set out as a domestic policy back in the late 1990s, and this need to come access to the European media about the possibilities of Europe seeking someone to blame other than themselves. 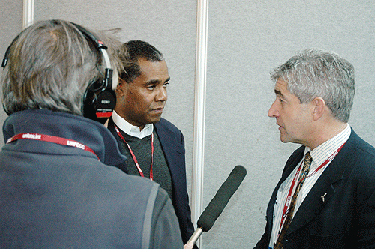 CURWOOD: But in the nuanced language of climate negotiations, the U.S. says it has nothing to be ashamed of. And at the end of the day, the American position remains unchanged.

CURWOOD: As the head of the U.S. delegation to Montreal, Paula Dobriansky refused to accept any criticisms.

DOBRIANSKY: We have always been part of discussions and dialogue on climate change actions in the near-term, in the medium-term and the long-term.

CURWOOD: Quickly, Undersecretary of State Secretary Dobriansky lists the measures of US involvement for combating climate change, including a major effort to engage with China, India and Australia with a regional initiative, as well as the U.S. hydrogen, “clean coal”, and energy efficiency and renewables programs. The U.S. focus, she says, is on new partnerships and new technologies, not global agreements.

DOBRIANSKY: It is our belief that progress cannot be made through these formalized discussions. We believe that the best approach and the best way forward is one that takes into account diversified approaches and differing opinions. One size does not fit all.

CURWOOD: Given the U.S. position, a number of diplomats, environmental activists and business leaders say they will now play a waiting game. Sooner or later, they say, the U.S. will have to impose some kind of mandatory limits on greenhouse gases, if only so American firms can compete in the world market. Investment banker James Cameron says he doesn’t mind investing his time until the U.S. comes around.

CAMERON: I remain resolutely optimistic about the country and its citizens dealing in this issue. And I am quite convinced that 15 minutes after this administration has left the White House there will be a change in climate policy in the U.S., and I fully expect the United States of America to be a full participant in the international agreement related to climate change even if they never ratify Kyoto because the framework convention will carry on, the U.S. has ratified that. It was always our intention when we negotiated that treaty to have a have a series of protocols, and maybe the next one after Kyoto is the Washington protocol.