Going Against the Green 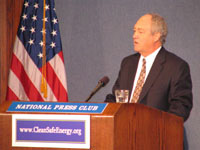 Greenpeace co-founder Patrick Moore spent 15 years advocating against atomic power. Then he had a change of heart. Host Bruce Gellerman talks with Moore about his new role as a lobbyist for the nuclear industry.

GELLERMAN: One of the leading advocates of nuclear power today was once one of its most outspoken opponents. Dr. Patrick Moore was a co-founder of the environmental group Greenpeace and served seven years as a director of Greenpeace International. Nowadays Moore has teamed up with former EPA chief Christie Todd Whitman to spread the word about nuclear power. Their organization, The Clean And Safe Energy Coalition, lobbies on behalf of the industry.

GELLERMAN: Well, the environmentalists call you a traitor.

MOORE: Well, name-calling doesn’t really help much with the discussion, does it? I think it’s important to get to the issue. And it’s certainly not about me. The whole issue of energy for this world, and the other issue of climate change, which is very strongly related to energy in the form of fossil fuels, which account for about 85 percent of our total energy consumption in this world. These are big issues. One could say that the relationship between energy for civilization and the potential for climate change is the biggest issue we have today. And, from a scientific point of view, perhaps the most difficult.

GELLERMAN: So climate change poses a difficult choice. Is nuclear power the lesser of many evils?

MOORE: If you want to think of everything as evil, like so many of the activists do today. One of the reasons I left Greenpeace was because I had to be against everything all the time. I was really more interested, after about 15 years of being against things every day, I was trying to figure out what the solutions were and figuring out what I was in favor of instead.

And when it comes to energy these days there’s sort of two schools of thought from an environmental point of view. One group, which I think includes Greenpeace and many other of the activist organizations, actually believes that we can phase out fossil fuels and nuclear energy, and at the same time they don’t like hydroelectric dams. That accounts for about 99 percent of all of the energy in the world for making electricity. You cannot propose a solution which eliminates 99 percent of the world’s energy.

So I believe, and I think the second school of thought, would be that the only way to substantially reduce fossil fuel consumption is to have a combination of renewables plus nuclear. Because you have to have a base load; you cannot make base load electricity with wind and solar, which are intermittent and unreliable. They can only fill a certain niche. And the only base load sources of power are hydroelectric, coal and nuclear.

Hydroelectric, unfortunately, is largely built out to capacity. Therefore, the real choice is between coal and nuclear. And, in addition, nuclear energy does not produce greenhouse gases and does not produce air pollution like coal does. So I don’t think it’s so much the lesser of two evils as, in fact, a very clean choice. And if you actually look at the statistics, a very safe choice for energy production.

GELLERMAN: Hmm. Your old organization Greenpeace reported just in April 2006 that it reviewed NRC, Nuclear Regulatory Commission, documents and found there were two hundred near-misses to meltdowns since 1986.

MOORE: Well, near-misses. You know, there’s actually ten levels of incidence that need to be reported to the NRC. Most of these are very minor. It’s sort of like saying you have two hundred car crashes where nobody was hurt. You know, well, okay, so the cars have to be fixed, but no one was hurt. And no one has ever been hurt by a nuclear reactor accident in the United States. It’s plain and simple. Even the worst accident that ever occurred, at Three Mile Island, did not hurt anybody. So, okay, accidents can happen. Accidents may happen in the future. But you have to weigh the risk against the benefit and in addition to that you have to look at the record.

And the record shows that with the exception of Chernobyl, which was a stupid design, that nuclear reactors have been safe. France gets 80 percent of its electricity from nuclear power and it has not had a history of accidents that have hurt anybody, whereas 6,000 people die in coal mines every year, 45,000 that die in the U.S. just from car accidents – it’s 1.2 million worldwide – and yet no one is banning the automobile. Why do people have such different perceptions of risk for different technologies? I do not understand this.

GELLERMAN: Well Dr. Moore, I want to thank you very much.

MOORE: Thank you Bruce, it’s been enjoyable talking to you.

GELLERMAN: Dr. Patrick Moore is head of the Clean and Safe Energy Coalition and chief scientist of Greenspirit.