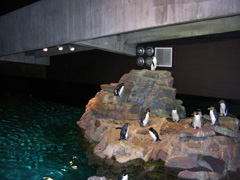 A community of penguins chills out at the New England Aquarium. (Photo: Ashley Ahearn)

David Helvarg might be the ocean's biggest fan. He started the non-profit environmental organization, Blue Frontier, back in 2003 and he's been working to make blue the new green ever since. Host Bruce Gellerman spent the afternoon with Helvarg at the New England Aquarium to talk about the state of America's oceans.

GELLERMAN: The world’s oceans may seem infinite and eternal, but they’re limited, and, says David Helvarg, they’re dying. In 2003, David Helvarg created the Blue Frontier Campaign. It’s purpose: to raise awareness about environmental threats to our seas. His latest book is called “50 Ways to Save the Ocean.” One of the ways is to visit an aquarium. So I asked Helvarg to meet at the New England Aquarium in downtown Boston.

GELLERMAN: Well, David, thank you for coming to the aquarium. I really appreciate it.

HELVARG: Well, it’s great to be here. Almost as fun as the ocean. Let’s enjoy.

GELLERMAN: What are you showing me first?

HELVARG: Well, let’s see what we find. It’s always a mystery what you’re going to run into.

A community of penguins chills out at the New England Aquarium. (Photo: Ashley Ahearn)

HELVARG: Yeah, these noisy fellows are Rockhoppers, like one of, what, 17 species of penguins. Slightly spoiled. You see three people hand-feeding them fish. You’ve got a penguin colony. It like combines the ambience of a heavy metal rock concert and a cow barn.

HELVARG: Because they’re changing. When I was a kid they were pretty much just medium-security fish jails. Now they’re very engaged. A number of aquariums have gotten engaged with marine education and conservation. And, you know, it’s education for action. I think aquariums are a great way for millions of Americans to get engaged and turned around to become citizen advocates for the oceans, what I call “seaweed rebels,” marine grassroots activists. 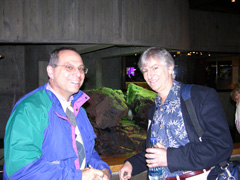 GELLERMAN: I was reading your book, and you quote Jim Watkins, who’s a retired admiral in the U.S. Navy. He says that the U.S. Commission on the Oceans policy warns that we have five to 10 years left to save the oceans before it’s too late?

HELVARG: He believes that there is a tipping point and that we’re very close to it, and if we don’t start to turn things around – not in our lifetime, but in this decade and the following – that it may simply be too late. When you reach a certain point – we’ve seen it in localized areas, you know, cod off Canada. They stopped fishing it but it didn’t come back. We realized they only reproduce in aggregations of certain areas.

You see it with a lot of sea life. We lost 90 percent of the large pelagic fish, the top predators in the open ocean, since 1950. And they’re beginning to see where the genetics change, where you take out so many big fish that the ones that come up behind them are smaller. There’s a scientist in Oregon, Mark Hixon, who talks about fat old females in a positive sense. Fat old females are the most productive and fecund fish. They produce more viable fish and, I mean, more viable eggs, and more of them.

GELLERMAN: Well, David, let’s go here. This is where they have a tank with a grouper, I guess. Wow, look at this fish! It’s looks like a rock. It looks like a boulder!

GELLERMAN: Look how humongous it is!

HELVARG: They’re big. They get bigger, too. You leave them alone and they grow to six, eight hundred pounds. People in the South Pacific, early divers, got really nervous about being swallowed by these guys. And there are stories of it. When I was on a dive trip in Australia one of the crew actually was killed. He was free diving and they found him dead on the bottom, and they suspect he was knocked unconscious by one of these big groupers, what they call Potato Cod over there.

And the problem was that when you go down and dive…at the time they had a bucket of fish they would feed these giant three, four hundred pound behemoths, and they started associating people with food. I almost got knocked over by one.

But this big is probably a “he.” A lot of grouper species, they start out small as females and as they get larger they transition to male. And so you have to have the big ones there to keep the species going. We’re learning it just as we’re destroying it, and we’re destroying it at a tremendous rate. Right now, we’re taking about 80 million tons of wild biomass out of the oceans every year.

I visited the USS Dennis, landed on the aircraft carrier doings ops off San Diego. This is like one of these monster ships, you know, you’re on a four-acre flight deck, they’re doing night ops, and it’s very impressive. I’m up on the bridge with the captain and we’re talking, and I realize every year we’re taking the equivalent of 900 aircraft carriers of living weight out of the oceans. That’s how much fishing we’re doing.

I mean, we used to have natural sanctuaries for fish called too far and too deep. And then after World War II we developed all these military technologies like Lorans and sonar and radar. And now we use satellites to chase fish into the deep oceans, and we’ve got rock-hopper devices to troll rocky bottoms, and there’s no refuge for fish unless we create them. We need to create national parks in the ocean. We need to stop using military technologies to catch fish faster than they can reproduce.

GELLERMAN: Look at that!

HELVARG: This is beautiful. Sea Dragon. 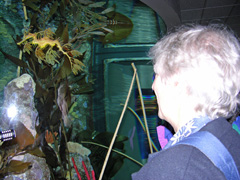 David Helvarg checks out the Aquarium’s seadragon, a close relative of the seahorse, which uses its leafy appendages to hide in seaweed and kelp. (Photo: Ashley Ahearn)

GELLERMAN: Oh my gosh! Look at that! It looks like –

GELLERMAN: Gosh, it’s like a sea horse with wings! Look at its gills in the back moving so fast!

HELVARG: And it’s about a foot long, and when it goes back into that kelp it disappears. It’s magical. I mean, when I was a kid I was angry, really, that I look up to the stars and think I was a generation too soon to explore alien worlds. When I first put on a snorkel and starting seeing things like Sea Dragons I realized there’s alien life right here.

GELLERMAN: What’s inconceivable to me is the amount of difference in the ocean, how many of these varieties and species, and just completely different from anything you’d see on land.

HELVARG: This is the wonder. We talk about the world being 71 percent ocean, but that’s just the surface – 97 percent of all the living habitat is in our seas. From, you know, the surface where sea turtles are munching on jellyfish and the dorsal fins of the sharks are floating, to seven miles down in the Mariana Trench where you have, you know, fish and deep thermal vents. That we used to think photosynthesis was the basis of life – it’s even hard to talk when you’ve got a couple Sea Dragons cruising by. They’re just wondrous.

GELLERMAN: You have a recommendation in the book: get married on the beach.

HELVARG: Get married on a wild beach.

GELLERMAN: On a wild beach!

HELVARG: Because, you know, get married on any beach you love because the things you associate with love and commitment, you’re more likely to go back and commit yourself to. I mean, you know, my life’s love, I remember, first kiss in a sandstone beach in a tide pool in Moss Landing. A lot of people both love and loss associated. I mean, I had a memorial at the beach for a loved one. You look out, it was a feisty day, you know, the wind was blowing, it was kind of – it reminded me of her.

And sometimes you feel like, you know, you still feel a part of something larger even when large parts of your own soul is torn away. We all come from water, salt water, at both an individual and evolutionary basis, and I think that connection’s vital. You know, we’re spending billions to go into space to Mars or other planets and what’s the first thing we look for? Water.

GELLERMAN: Let me ask a cynical question. Why should I care? I mean, you know, I can come to the aquarium and see penguins. I’m never going to Antarctica. What does it matter to me?

HELVARG: Well, this is what people say. What’s the ocean and ocean life matter to me? But we’re a water planet. Life derives from the ocean and we’re dependent on it. We’re dependent…the air we breath, I mean, the oceans are – we talk about the rainforests are the lungs of the planet, it’s really the algae in the ocean that’s absorbing that excess carbon and turning it into the oxygen we need to survive.

If you’re living in Iowa, if you’re a farmer, the ocean’s what drives the weather and climate. Depending on how the oceans act depends on the rain you’ll need for the fields to raise your crops. We also depend on the ocean for recreation, for transportation, for trade, for protein. And also just that spiritual connection, that sense of wonder and awe that so many of us feel when we get there on the water’s edge.

GELLERMAN: So David, here we are in front of this small submersible submarine. It’s about two bathtubs long, it’s painted yellow – yellow submarine.

GELLERMAN: Would you ever get into a submarine like this and go to the bottom of the ocean?

HELVARG: I’d love to. At least as far as it’s depth-qualified for.

GELLERMAN: Well, if you go, take me along.

GELLERMAN: (Laughs) David Helvarg is president and founder of the Blue Frontier Campaign. His most recent book is “50 Ways to Save the Ocean.”