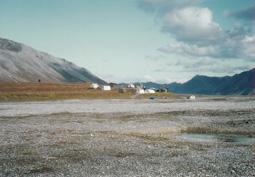 The fly-in hunting camp owned and operated by Bob Bowman--located on the Ivishak River in the Brook Range, Alaska (Photo courtesy of U.S. Fish and Wildlife Service)

As an undercover agent for the U.S. Fish and Wildlife Service, Lucinda Delaney Schroeder busted illegal and inhumane hunting operations around the nation. She tells host Bruce Gellerman how she did it.

GELLERMAN: It’s Living on Earth. I’m Bruce Gellerman. Lucinda Delaney Schroeder is five foot two with eyes of blue, a wife and a mother, too. But don’t let her small size and demeanor fool you. For thirty years she worked as a special agent for the U.S. Fish and Wildlife Service where she would frequently go undercover to track down some of the most despicable of species: bloodthirsty hunters who kill for fun, care nothing for the animal, and less for the law. She’s written a book about her experience as an undercover wildlife agent called “A Hunt For Justice,” and she joins me. Ms. Schroeder, welcome to Living on Earth.

SCHROEDER: Thank you Bruce, I’m delighted to be here.

GELLERMAN: Back in 1974, you were one of the first women at the Fish and Wildlife Department’s law enforcement arm, is that right?

SCHROEDER: Yes, I was.

GELLERMAN: How could that be just about 30 years ago they didn’t have any women?

SCHROEDER: Because prior to 1971 it was illegal for women to carry firearms in federal service. So they weren’t hiring women until just shortly thereafter.

GELLERMAN: Had you fired a firearm before entering the federal service?

SCHROEDER: No, I hadn’t.

GELLERMAN: So what would make a nice woman like you want to take up a firearm?

SCHROEDER: Well, I had a degree in criminology. I graduated from the University of Maryland in 1974. And I really wanted a job as an investigator. I wanted a job where I could go out and find bad people doing bad things. And the Fish and Wildlife Service attracted me because it was a job where I could do something with a cause. One of the things that I liked to do in my career was find the very worst, the very worst of the wildlife violators out there who were doing the most damage.

GELLERMAN: A goodly part of the book is you find them in Alaska.

SCHROEDER: Yes, I do. My book concentrates on one case because it is so dramatic and it does show what tremendous damage a small ring of international poachers can do to wildlife.

GELLERMAN: It’s not so much that these guys are hunters as herders. They’re using snowmobiles and airplanes to basically channel animals into a killing field.

The fly-in hunting camp owned and operated by Bob Bowman--located on the Ivishak River in the Brook Range, Alaska (Photo courtesy of U.S. Fish and Wildlife Service)

SCHROEDER: That’s exactly right. When I was there, small airplanes that are called “supercubs” were used to herd animals into shooting range of the hunters. The animals were primarily grizzly bear. Many people may not realize this, they’re one of the easiest animals to herd, and they can be corralled and they can be herded in almost any direction. And this was happening day after day while I was at the camp. In fact, the grizzly bear hunt usually takes three to five days. The airplanes were cutting these hunts down to 15 to 30 minutes, from three to five days.

GELLERMAN: Not much sport there. What were these people after?

SCHROEDER: The hunters that I encountered were not interested in sport. They were living by what I call “the creed of greed.” They were just simply interested in the trophy. Their only ammunition was their checkbook. They went to the camp knowing full well that there was going to be some very serious violating going on, and they went there and they killed their animals very quickly and went home with their trophies.

GELLERMAN: A lot of these hunters aren’t good ol’ boys, they’re international bankers and politicians – these are people with big bucks.

Lucinda with an illegal overlimit of waterfowl. (Photo courtesy of U.S. Fish and Wildlife Service)

GELLERMAN: The organizers in this operation want you to go after Dall sheep. And they’re on the cover of the book, they’re magnificent animals, but why Dall sheep? Why not grizzlies or…

SCHROEDER: Well, Dall sheep are one of the premier animals for trophy hunters, and they’re also one of the most difficult to hunt. The trophy hunters who go to Alaska really like to hunt Dall sheep and the outfitter wanted me, a woman, to hunt a Dall sheep so he would have a photograph to put on his brochure for the upcoming hunting season. But the Dall sheep that I ended up shooting was shot on a national wildlife refuge without a permit and it was an illegal sheep.

GELLERMAN: In going after these bad guys it sounds almost like James Bond. You have secret tape recorders and you have to have an alias. You go as “Jane.” It is dangerous, isn’t it?

SCHROEDER: It can be very dangerous, especially since all the work is done in remote areas and there is no backup. In my investigation I didn’t take any tape recorders with me because I couldn’t run the risk of having one found on me. And I didn’t take a handgun with me. I had a rifle, of course, because I was posing as a hunter, but I didn’t have firearms, I didn’t have identification, I didn’t have anything. I had no way of contacting any other agents or other backup while I was in the Brooks Range for help. So I was strictly on my own, and I had to rely on my wits every moment.

GELLERMAN: What would they have done to you had you blown your cover?

SCHROEDER: It’s hard to say. Obviously, the worst thing they would have done is left me on the tundra, considered me a lost hunter. They might have killed me outright. It’s just impossible to say but it would not have been good.

GELLERMAN: In the book, in the investigation that you conducted in Alaska – I mean, some of these animals are so magnificent. I’m thinking of these nine-foot grizzly bears. In the end, when you catch these bad guys and they get some time in prison, it’s not much time, a year or two, and a couple thousand dollar fine. What kind of justice is that?

SCHROEDER: For the most part wildlife violators don’t serve a lot of time in jail, and they get back out in the woods and they’re back to violating again. But in the case of my investigation I was fortunate enough in that the camp was closed down completely. All of the violators who participated in the violations that I investigated are no longer in the field. They’ve been out of business for many years. So it was a very successful investigation from that standpoint.

GELLERMAN: The Fish and Wildlife Service, the portrait that you paint, is of some very dedicated people, dramatically under-funded. How many agents were there in the United States?

SCHROEDER: Right now there’s about 230 for the whole country. It’s always been between about 210 and 230. The numbers are pathetically low. It doesn’t get the support that it needs, it has a huge job, the agents are all overworked, and, as the years go by, their jobs are getting more and more difficult.

GELLERMAN: Is the problem getting better or worse? Are people toeing the line? Obeying the laws?

SCHROEDER: A little bit. I’m busy with a lot of other occupations so it’s difficult to get time to hunt, but I do a little.

GELLERMAN: Ms. Schroeder, than you very much.

SCHROEDER: Well, thank you. I’ve enjoyed talking to you very much.

GELLERMAN: Lucinda Delaney Schroeder’s book, the true story of a woman undercover wildlife agent is called “A Hunt for Justice.”