View From the Top – Preserving the Nation’s Fire Towers 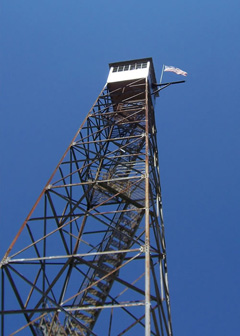 Once, fire lookout towers symbolized natural resource protection in the United States. In the mid 1900’s, about eight thousand lookout towers housed men and women watching above treetop level for smoke and fires near and far. But technological advances led to the abandonment of most lookout towers in the 1970’s. As Cameron Lawrence reports, there are efforts to preserve the symbols of a fire management era gone by.

GELLERMAN: Once, there were 8,000 fire lookout towers in the United States. From these vantage posts generations of men and women kept a watchful vigil over the nation’s forests. But today, with fewer than 2,000 of the towers left, there’s a movement underway to protect those that remain. Cameron Lawrence has our story.

LAWRENCE: There’s an easy camaraderie among the members of the Route 377 Volunteer Fire Department located among the rolling ridges of northeastern Kentucky, near Morehead. Most of the men working at the firehouse on a spring Saturday grew up nearby and have a deep commitment to the region.

[SOUND OF MEN TALKING AND WORKING]

LAWRENCE: Forty-one year-old Dowe Blevins is the fire department’s chief. For years, as he drove area roads, he’d spot the abandoned Hickory Flats Fire Tower, an 80-foot skeletal structure capped with a small lookout, sitting atop a hill high in the 700,000 acre Daniel Boone National Forest. On one of those drives through the country, Blevins hatched an idea.

BLEVINS: We come back one night, and I just took my hat off and said ‘hey, guys, we gotta buy a fire tower.’

LAWRENCE: Blevins says that in the past, Hickory Flats was a big part of community life. People often hiked to the tower and visited with the lookouts. But after decades of abandonment, it was falling apart. That bothered Blevins.

BLEVINS: It’d probably been 20 years since I’d been up there. And we walk up there, and it’s all grown up and trees as tall as it is. You know, some of them. But we went up there and we said, ‘well, this is doable.’

LAWRENCE: The first part of the effort was raising the money to buy the tower.

BLEVINS: So what we done is we just added another fundraising night.

DANNY BLEVINS: We raise funds for trucks and equipment, so we decided we would start have a couple of fundraisers just for the fire tower, and that’s what we’ve done. We were able to raise a little bit of money from a fish fry and then some donations to help put into the tower.

LAWRENCE: Diving into historical research, the men discovered that Hickory Flats was built by the Civilian Conservation Corps in 1934 and that it was among 180 other fire lookouts that once stood in Kentucky. 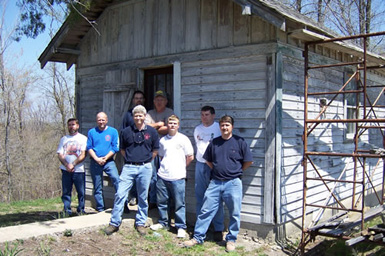 Route 377 Volunteer Fire Department in front of the cabin or "ground house" they are restoring. Fire chief Dowe Blevins is front-center, Danny Blevins is second from left. (Photo: John Gregory)

In the 1980s, no longer using the tower, the U.S. Forest Service had traded it to private owners for other land the agency wanted. The men of Route 377 tracked down the tower’s owner. They bought it for 400 dollars. Next, the men put in a driveway and started restoring the cabin and tower. Danny Blevins says the work has been worth it.

DANNY BLEVINS: When you get in the tower you don’t take anything for granted. The beauty is spectacular. It really wakes you up to what you’ve got at your own back door.

LAWRENCE: The Route 377 fire department is among a growing cadre of enthusiasts around the country working to save the nation’s fire towers. It’s a story whose beginnings go back to the early days of natural resource management in this country.

Keith Argow is a former district ranger with the U.S. Forest Service and president of the National Woodland Owners Association, a group of non-industrial private forest landowners. He says when the Forest Service was founded in 1905, there were just a few fire lookout towers in the country. But that would soon change.

ARGOW: Gifford Pinchot, of course, was the first chief of the Forest Service, and he witnessed the tremendous 1910 fires.

LAWRENCE: Those fires were the largest in American history. Called “When the Mountains Roared,” the inferno raged across three million acres of northern Idaho and western Montana. The blaze led to a call for a national fire lookout system. By the end of the 1930s, with major help from the Civilian Conservation Corps, more than 5,000 lookouts housed tower men and women watching for smokes in the distance.

MAUK: You had Hickory Flats, Triangle, Tater Knob…(FADES UNDER]

LAWRENCE: Eighty-six year-old Joe Mauk recounts the towers that once stood in this part of Kentucky. During a 40 year career with the Forest Service, he oversaw fire protection efforts in this region. Mauk says in western forests, lightening strikes are one of the major causes of fires. But in eastern forests, it’s usually people who are to blame.

MAUK: Back at that time we had a lot of tobacco farmers around the country. In the spring, they’d built plant beds, pile brush on them and burn them to fertilize the tobacco beds. Quite often while they were burning them a wind would come up and blow out and start fires. And then people burning stuff around their homes at that time, started quite a few fires. 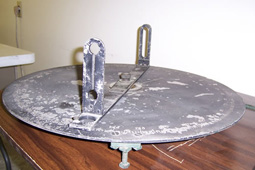 An alidade used to locate fires. From an old Kentucky fire tower, donated by a private collector to the Route 377 Volunteer Fire Department. (Photo: John Gregory)

LAWRENCE: Mauk says each lookout had an instrument called an alidade, a device that took location readings. When a tower man or woman spotted smoke, they took a reading and called the information into a dispatcher, who’d get readings from other towers and pinpoint a fire’s location.

It was the same system used in all of the nation’s lookouts. But by the 1970s, most lookout towers were abandoned as state and federal forest agencies turned to aerial surveillance, satellite detection and other high-tech methods. Again, Keith Argow.

ARGOW: It was a very sad period which I witnessed as a district ranger at the time, and on my unit, I fought hard to maintain all of my lookouts. But they’re all gone now.

LAWRENCE: For liability reasons, agencies burned, dynamited or toppled most towers. Others were vandalized. More than 25 years ago while hiking in Mt. Hood National Forest, Argow decided to try to save the nation’s remaining fire lookouts.

ARGOW: I had taken my son up to one that was a stone structure built in the Civilian Conservation days, and it had been abandoned. And he was only five years old, and he was sitting up there at dusk, and asked me what they were going to do with the tower. And I said, ‘well, they can’t burn it, son, so they’ll probably dynamite it.’ And he said ‘Dad, you can’t let them do that.’ And without even thinking, I said, ‘I won’t, son.’

LAWRENCE: That promise led to an eight-year effort to establish the National Historic Lookout Register, which does research on old lookouts and now lists more than 672 of them.

LAWRENCE: I definitely have the white knuckle thing going on!

DOWE BLEVINS: We almost got it whipped now!

LAWRENCE: On a warm spring day, brothers Dowe and Danny Blevins take me to the Hickory Flats Fire Tower. Next to the tower is a cabin where the lookouts lived and that the men are restoring. On the tower itself, there are eight flights of see-through metal steps. It helps not to look down. At the top, a trap door leads into a small wooden cab, about seven feet square and 80 feet off the ground.

DANNY BLEVINS: This is a big time tree house!

LAWRENCE: The view is an expansive 360-degree panorama of wooded ridge tops, delicately decorated with the pink of redbud trees in bloom. Dirt logging roads cross some of hillsides. Small farms nestle in the valleys. From this high post, it’s easy to see how a lookout could spot smoke in the distance. Again, Danny Blevins. 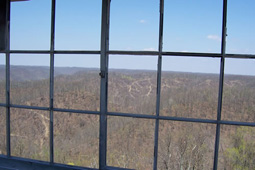 Looking out from the top of the Hickory Flats Fire Tower. Both privately-held land and the Daniel Boone National Forest are in view. (Photo: John Gregory)

DANNY BLEVINS: And if you think about this, here it is 2006, I’d be willing to bet that we’re the only four people in the state of Kentucky sitting in a fire tower. And that’s pretty neat, that you’d be able to experience this.

LAWRENCE: Many of the nation’s fire lookout towers out west that have been restored are available for overnight rental to hikers and backpackers. The Route 377 Volunteer Fire Department hopes that soon Hickory Flats will be the first fire lookout tower in the East open for overnight guests. For Living on Earth, I’m Cameron Lawrence near Morehead, Kentucky.

GELLERMAN: Our story about the fire tower watchers of Kentucky was co-produced by John Gregory.