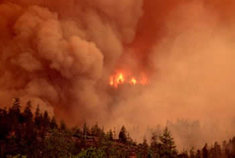 An area of wild, roadless and burned forest raises every current hot button issue in forestry today: Should burned areas be left to lie, or logged? Should loggers be allowed in forests where no vehicle has traveled? And who decides, the federal government, or the state of Oregon? Ley Garnett of Oregon Public Broadcasting reports.

CURWOOD: As the Clinton administration was leaving office it decreed that certain wild areas of national forests should remain free of roads. The Bush White House has since sought to roll back the roadless rules, saying, among other things, that local officials should have more control. Ironically, in Oregon, the Bush Administration is now insisting that a roadless area be opened up for logging, despite the objections of the state’s governor.

At issue is part of a half-million acres that burned in 2002 in the famous Biscuit Forest Fire. Conservationists say leaving the burned forest is the best way to regenerate the trees and the rare vegetation found there. But since the fire, timber companies have been trying to enter the area to cut damaged trees before they decay, and the Forest Service has now granted some limited access.

GARNET: For a low-key guy, Oregon Governor Ted Kulongoski is hopping mad. As he recalls it, the Bush administration told him and 49 other governors that if they wanted to preserve the roadless areas of federal forests in their states, they had to draw up a petition stating as much. The Governor is doing that. He also filed a lawsuit to protect the burned area, and he’s used the channels that come with the office of governor.

The Biscuit Forest Fire of 2002 destroyed half a million acres in Oregon. (Photo courtesy of: USDA Southern Research Station)

But last week, for the first time since the Clinton administration, the U.S. Forest Service auctioned off logging rights in a roadless area. It was the roadless area burned by the giant Biscuit Fire. Oregon Governor Kulongoski says he feels betrayed.

KULONGOSKI: I thought I had an understanding, and I thought the federal government’s position was, until all of the administrative procedures and all these legal issues get resolved, there would be a status quo. Obviously there’s been a change of heart. And I just think we should have the status quo until this is all resolved.

GARNETT: The fight over what should be done with land burned in the Biscuit Fire has been fierce.

GARNETT: This demonstration in Portland is one of many in the last four years. More than 100 protestors have been arrested at the logging sites and several of them have gone to jail. One of them, George Sexton, is conservation director for the Klamath-Siskiyou Wildlands Center. He says logging the burned area is going to harm, not help, the forest recovery.

SEXTON: And so they’re only taking the biggest, best trees, which are extremely important for future soil, for holding together the steep slopes above salmon-bearing streams, and for wildlife habitat and recruitment. They need to be spending these types of resources going into the small diameter plantations that they’ve created throughout the landscape and providing sustainable jobs and doing real fire prevention instead of going in for one last old growth gold rush in the Matrix lands.

GARNETT: New and controversial research from Oregon State University seems to back up the idea of letting the burned forest lie. Graduate student Dan Donato studied the landscape left behind by the Biscuit burn and found that new trees were sprouting from the ashes. He got his paper published in the journal of Science, but he encountered some resistance from some, at his own university. Soon, he found himself testifying before a Congressional subcommittee convened in Medford, Oregon.

DONATO: We found substantial conifer establishment two and three years after the fire, and that seedlings were surviving multiple years. Mature trees distributed throughout the burn that had not been killed by the fire probably acted as seed sources, and this underscores the importance of surviving trees to forest regeneration.

GARNETT: Then Donato and his fellow researchers compared areas left alone with those that had been salvage logged.

DONATO: The regeneration we observed was reduced by 71 percent as a result of the salvage operations. This was due to soil disturbance and burial by woody materials.

GARNETT: But forestry is economics as much as science. Many people in this part of Oregon are just as passionate that salvage logging provides jobs and helps pay to replant the forest. Former Oregon state Republican Party chairman Kevin Mannix spoke at a rally in Medford outside the Forest Service office, while inside, timber sales were up for bidding.

MANNIX: I thank you for coming here today to show your support for our timber workers, for those involved in the timber industry, and for the fair, balanced and progressive policies that are now finally being implemented so we can get Oregonians back to work, so that we can protect our forests from the depredations of nature which may occur, so that we can work with nature to provide productive jobs for Oregonians.

GARNETT: As the Undersecretary of Natural Resources for the Department of Agriculture, Mark Rey oversees the U.S. Forest Service. Although he’s a senior administration official, he’s reportedly been closely involved in the Biscuit Fire timber auctions. Rey says the Governor of Oregon has no reason to be upset.

REY: The Governor has a very different recollection of our discussions than I do.

GARNETT: Rey is referring to a meeting he had with Governor Kulongoski more than a year ago trying to settle lawsuits about salvage logging in the Biscuit Fire area.

REY: The purpose of that discussion was to see whether the state could be of assistance in trying to help broker a mediation. Ultimately, that wasn’t possible, and what we agreed to that day was that we would agree to disagree.

GARNETT: Rey says he’s not been pulling the strings from Washington, D.C. to log in roadless areas of Oregon’s Siskiyou National Forest. And he says the Bush Administration is not contradicting its stated effort to return more authority over public land to states and local residents.

REY: So this is a case where, you know, a good faith negotiation failed. The plaintiffs thought that they could prevail in stopping virtually all harvesting in both the roadless and most of the roaded areas, and that’s not what the courts decided.

GARNETT: At least two more lawsuits are still pending about proposed logging in the Biscuit Fire area. Environmentalists say if logging is permitted in the roadless area of the Biscuit Fire, it will set a precedent.

But timber supporters point out that they’re going to be able to harvest only about 20 percent of the trees originally promised by the Forest Service. On Friday, June 9th, the Silver Creek Timber Company purchased the right to log 360 acres in the roadless area of the Biscuit Fire.