The damage caused by the 1928 hurricane convinced the Federal government to fund construction of a permanent dike around the southern perimeter of Lake Okeechobee. (Photo courtesy of: US Geological Survey)

Lake Okeechobee, the second largest lake in the contiguous US, has been called the “Liquid Heart” of Florida, and a 143-mile dike keeps it from spilling over. But new maps from the Army Corps show weaknesses in the walls that could mean disaster for the communities around the lake if a massive hurricane were to breach the dike. Host Steve Curwood talks with Associated Press reporter Brian Skoloff about why the Corps is keeping the maps under wraps.

CURWOOD: Lake Okeechobee in South Central Florida is the largest freshwater lake in the continental United States, except for Lake Michigan. Back in the 1920’s, hurricane-related flooding from the lake killed thousands of area residents. So, starting in the 1930's, the Army Corps of Engineers turned Lake Okeechobee into a reservoir half the size of Rhode Island by building Hoover Dike. The dike is as wide as a football field, three stories high, and143 miles long.

[WATERS OF DESTINY: Foot by foot…mile by mile the work went on….drilling, blasting, digging..bite by bite..5 to 8 cubic yards per mouthful…slowly persistently gauging the bottom to buildup the top.]

CURWOOD: Hoover Dike was designed to tame Mother Nature. Not only was it to contain the damage and devastation from hurricanes which regularly ravaged the region, it also helped to turn the timber marshland of central Florida into fertile soil for sugar cane.

[WATERS OF DESTINY: Water that once ran wild, water the ruined the rich terrain, water that took lives and land…put the disaster in the headlines and death upon the soil…now it just waits there, calm, peaceful, ready to do the bidding of man and his machines…]

CURWOOD: But today the huge dirt barrier is leaking, and there are fears Mother Nature could strike with a vengeance or terrorists might take advantage of the dams vulnerabilities. Sixty thousand people live around Lake Okeechobee, and federal security officials have designed an evacuation plan. But they refuse to show local residents detailed maps depicting Hoover Dike's most critical areas, saying they don't want to tip off would-be terrorists.

Brian Skoloff of the Associated Press in nearby West Palm Beach has been covering the issue. Hi, Brian.

CURWOOD: Now what exactly is the security concern here?

SKOLOFF: The Army Corps of Engineers’ simply, they’ve put together a bunch of flood maps that would show where water would flow if certain areas of the dike were breached, whether in a hurricane or for any other circumstance. And they’ve released one specific map that shows some detail of where breaches would go, how high flood water would rise and how far it would move away from the lake and down into the area towns.

The damage caused by the 1928 hurricane convinced the Federal government to fund construction of a permanent dike around the southern perimeter of Lake Okeechobee. (Photo courtesy of: US Geological Survey)

But they do have a number of maps that they’re simply not releasing, basically saying that they’re so detailed, showing specific sites along the dike that if a breach were to occur there exactly how fast water would flow out, where it would go, how high it would be. And there’s simply concern that if that information were to fall into the wrong hands, terrorists could use it to cause some damage and possibly loss of life around the lake.

CURWOOD: Now it would seem that it would be obvious where the vulnerabilities are, both in what, the Hoover Dike and throughout the flood plain.

SKOLOFF: Sure. It is pretty obvious. I mean, you know, if you breach the dike at any point, a large enough hole in the dike obviously is going to create a hole in the shoreline and water’s going to flow out. And, you know, the hole idea that the Corps’ not releasing these maps may not be that big of a deal for the public.

The public is being made aware of evacuation plans and different things they need to do to prepare. These maps are being given to all the emergency planners in the area to use in developing their evacuation plans. So it’s not that urgent that residents need to see these maps; residents are just concerned they’re not being told everything they need to know simply because, you know, they live right up against this dike, and they see images of Katrina and New Orleans and they’re frightened.

CURWOOD: Now I understand that the Army Corps of Engineers has stopped working on the dike. Why is that?

SKOLOFF: Yeah, they’ve encountered some problems with the work that they were trying to do in a specific point. There’s a section – they’ve broken up their work into about eight sections on this 143-mile dike – this section that they’re working on now is on the south side of the lake, it’s about 26 miles long. The contractor that was working there was working to put a 36-foot-deep, two-foot-thick concrete wall straight down into the middle of the dike to create this barrier to keep water from seeping out.

What they were finding was happening, though, is the dike itself now is made up of soil dredged from the lake, shell pieces, just muck that was pounded together to create this wall. And as they’re digging this trench to put the concrete wall in, the wall is caving in on itself and filling the trench. So obviously that technique was not working, so they decided they weren’t going to waste any more time and money; they were going to halt construction and go back to the drawing board and redevelop some different plans and designs to come up with a different idea.

CURWOOD: Let me just be clear – what is the scenario then that people living around the lake should be worried about? What does the Army Corps say is the worst-case scenario for Lake Okeechobee?

SKOLOFF: Well, you know, according to their maps and their plans that they’ve put together for evacuations, one example, I guess – there’s a whole lot of different scenarios – one example is if the lake were at 21 feet and a major hurricane were to come through today, a breach could occur on the south side.

If that did occur, flooding could extend about 32 miles south and remain inundated for up to 45 days as they repair the dike. Now we’re not talking neck-deep water here; they think it would probably be maybe knee-deep that far out. But this is what they call a apocalyptic scenario, their doomsday scenario, that they’re saying would really never occur because the lake is never going to be at 21 feet.

CURWOOD: There’s a lot of hurricane history at Lake Okeechobee. Tell me about the storm of 1928.

SKOLOFF: Sure. Actually, there were two. The first one came through in 1926; that one severely devastated the area around Lake Okeechobee. Obviously, there wasn’t a dike there at the time, so it just pushed the waters over Lake Okeechobee. At that time about 4,200 people were killed, but that was throughout Florida, Mississippi and Alabama. 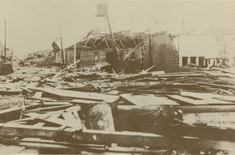 Wreckage from the hurricane of 1928, south of Lake Okeechobee (Photo Courtesy of: NOAA)

Herbert Hoover then, who was president, got to work with federal officials, state officials to start trying to come up with a remedy for this problem. They didn’t come up with it soon enough. Then, in 1928, another hurricane came through, swept over the lake, and just pushed a ton of water out into the towns around the southern portion of the lake. Killed about 2,500 people.

At that point the Corps got to work and started building this dike around the lake. In 1932’s when the started, 1970 they completed it.

CURWOOD: Is there anyone around who remembers the big storm of 1928?

SKOLOFF: Sure. These towns tend to keep their residents. A lot of people that live here have lived here their entire lives, there’s multiple generations. So there’s a number of people around that remember the 1928 hurricane.

One guy I spoke to named Haker Lowe, he’s in his 80s. He remembers riding out the 1928 storm on a houseboat off a tributary off Lake Okeechobee with his family, saying it was just terrifying, with the howling wind and the water and the rain pelting down. And that by the next morning, once the hurricane passed, they went to go find their house and their house was completely gone. So they basically survived by leaving their house and taking refuge on a houseboat.

The memories are still very vivid. In Belle Glade, one of the towns down there, there’s actually a statue that stands in front of the city hall. It’s a really interesting statue of a mother and a father and a young child. The mother’s clutching a baby and they’re sort of running and looking back over their heads, and there’s these waves coming at them. It’s just a plaque to commemorate the 2,500-some people that died in the area there when that storm did flood through.

CURWOOD: Brian Skoloff is the West Palm Beach correspondent for the Associated Press. Brian, thanks for speaking with me.

SKOLOFF: Thanks for having me.