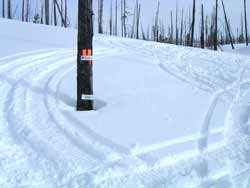 Snowmobile tracks in national parks will soon be a rare site, thanks to a new policy set by the Interior Department. (Photo courtesy of: National Park Service)

The Bush Administration has officially limited the use of snowmobiles in national parks and has created a massive marine protected area as a national monument off the Hawaiian coast. Are these signals of a new environmental direction for the administration? Host Steve Curwood talks with Terry Anderson, executive director of the Property and Environmental Research Center in Bozeman, Montana.

CURWOOD: The Bush Administration has been taking a turn to the green lately. It recently created a new marine sanctuary in the Northwest Hawaiian Islands that’s 100 times larger than Yosemite. And now the Administration has dumped a proposal that would have allowed snowmobiles and other off-road vehicles in national parks.

In announcing this reversal of the Administration’s previous position, newly appointed Interior Secretary Dirk Kempthorne declared environmental protection needs to trump recreational use in the parks. Chris Mehl of the Wilderness Society in Bozeman, Montana applauded the policy shift.

Snowmobile tracks in national parks will soon be a rare site, thanks to a new policy set by the Interior Department. (Photo courtesy of: National Park Service)

MEHL: One never wants to turn your back on welcome news, and it is welcome news. It’s somewhat surprising given the past record of the Administration, but they’ve said the right things, but we now have to wait for the details and measure by their actions, not just their words.

CURWOOD: Terry Anderson is also in Bozeman, Montana, but he has a different perspective. Mr. Anderson is executive director of the Property and Environmental Research Center. It’s a conservative think tank that promotes market-based solutions to environmental problems. Terry Anderson, who advised then governor Bush on public land issues during the 2000 campaign, does not applaud the president’s new go-green policies.

ANDERSON: It doesn’t exactly follow what you might expect a conservative Republican administration to be doing. It’s certainly stepping on the toes of traditional allies, namely the vehicle-use people, the blue ribbon coalition, to be sure. And it’s not clear to me why they would step on those toes, unless it’s that the Administration and the political strategists in the Republican party think that somehow this move at the time of a midterm election will win some swing votes for conservative senators and congressmen. It is not going to leave the president with some great legacy as a conservation or environmental president. That ain’t gonna happen, no matter what.

CURWOOD: Well President Bush, for example, not so long ago designated a big area of the North Pacific, northwest of the Hawaiian Islands, as a national monument, a marine reserve that’s bigger, actually, than I think the rest of the entire national park service system.

ANDERSON: Yes it’s phenomenal in size and is, again, hard to explain other than there was no conservative constituency to be opposed to this. I think the administration is in its last two years going to make some effort to suggest that Republicans can be as green as Democrats. And I think that will be part of the gearing up toward the next presidential race when whoever’s the Republican candidate is going to face a significant opposition from the Democrats saying that “you elect this person and you’ll get more of the environmental degradation that came with the Bush Administration.” I’m not saying there is environmental degradation – I don’t believe it’s been nearly what the environmentalists claim – but the claim is what will matter, and the next presidential candidate will face that sort of an argument.

CURWOOD: And you don’t feel that in terms of a Conservative perspective on the environment that the Bush Administration has lost its way, or is a bit confused?

ANDERSON: I don’t think it’s had a way from the start. I think if it’s had a way it was that the pendulum had swung over to the side of preservation during the Clinton Administration, and now the Republicans, and they were going to swing the pendulum back to the side of commodity production. But in terms of this Administration having any systematic anchor point with respect to Conservative conservation, as I like to think of it, I don’t think it’s been there from the outset. And it certainly isn’t likely to be something that is going to be planted, fertilized, germinated and cultivated during the last two years.

President George W. Bush addresses guests in the East Room of the White House before signing a proclamation to create the Northwestern Hawaiian Islands Marine National Monument. (Photo courtesy of: The White House)

CURWOOD: You know, before we go, just on your last point there, Conservative conservation, I mean that is the essence of the word “conservative.” Why is it perceived by many that Conservatives don’t want to protect the environment?

ANDERSON: It was clear during the initial run for the White House that strategists believed that the environment was the Achilles’ Heel, and that if they tried to take Al Gore on with an environmental issue he would impale them on that sword. Gale Norton, myself, and several others tried to make the case that there was a way that you could be a Conservative conservationist, and that way was to abide by fiscal conservatism as well as market-based approaches, and that was the line we pushed. Somehow Republicans still have not gotten that message, despite the fact that there are literally thousands of Republicans who are in that middle of the road who sincerely care about the environment and find it the issue that really bothers them on the Conservative side.

CURWOOD: Terry Anderson is the executive director of the Property and Environmental Research Center in Bozeman, Montana. Thank you sir.

ANDERSON: Thank you, Steve, pleasure to be with you.

The Property and Environmental Research Center