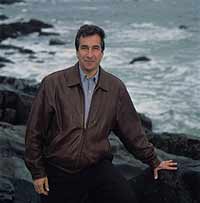 Fish stocks crashed in the U.S. in the late 80’s, prompting the government to require rebuilding plans for all overfished species. Host Steve Curwood turns to Professor Andy Rosenberg, of the University of New Hampshire, who has just completed a ten-year assessment of fish population rebuilding efforts in the U.S., to find out how the recovery’s going.

CURWOOD: It’s Living on Earth, I’m Steve Curwood. The population of fish in the coastal waters of the United States is slowly recovering from a disastrous plunge in the late 1980’s. In 1996, the Magnuson-Stevens Act was amended to require the rebuilding of over-fished stocks by regulating and restricting the amount and types of fish that can be caught.

Now, ten years later, a team of scientist has assessed the effects of the law. One of them is Andy Rosenberg , former deputy director of the National Marine Fisheries Service. He now teaches at the University of New Hampshire. Hi, Professor.

CURWOOD: Now you recently authored an article that you called “Rebuilding U.S. Fisheries: Progress and Problems.” Just how many fish stocks did you study and, well, how are they doing?

CURWOOD: Well that certainly does sound like the question, doesn’t it? I mean, what can we do to improve this rebuilding process?

ROSENBERG: There is tremendous pressure from – and it’s really political pressure in a lot of ways from the fishing industry – to slow down the implementation of any restrictions. Unfortunately that means that, in many cases, instead of actually addressing the problem of over-fishing upfront, we’ve had these very slow phase-in programs that reduce fishing a little bit every year. That can often be detrimental, because it’s not as if the fish want to wait for us to adjust. They’re not terribly concerned with whether, you know, humans are adjusting to changes in the way that they operate their businesses. The stocks continue to decline and we dig a deeper and deeper hole.

CURWOOD: Which species are having the most trouble right now?

ROSENBERG: Well, cod in the Northeast is sort of a poster-child for over-fishing. It’s been a long-term problem; it’s causing incredible adjustment difficulties in the fishing industry. In the Pacific Coast there are serious problems with the so-called rockfish. There’s a lot of species of rockfish, more than 60 species, but there’re a few species that are primarily been commercial and, in part, recreational targets, and they are struggling. They’re very slow-growing, very low-production species, so it takes them a long time to recover. In the Gulf of Mexico, species like red snapper, and some of the snappers and groupers, have been over-fished for a long time.

And it’s really important to note that in all cases the fundamental issue is can you reduce fishing pressure? Sure, there are environmental variations from year to year – that’s important – but fishing pressure is also always important if it’s at a high level. And so unless you address the impacts of fishing you’re really not going to rebuild most resources. It just doesn’t happen.

CURWOOD: Now the Magnuson-Stevens Act, which deals with the management of U.S. fisheries, is up for renewal. There’s a bill that’s passed the Senate, and there’s another in the House. Professor, what kind of legislation do you see as necessary to improve rebuilding programs in the future?

ROSENBERG: Well the Magnuson-Stevens Act is a really good piece of legislation. The revisions that have been made by the Senate, again, I think make some real progress. I think what needs to be included is we need to hold onto the basic framework of the rebuilding requirement, and we need to strengthen it. And we need to strengthen it by ensuring that over-fishing is ended as quickly as possible.

CURWOOD: Andy Rosenberg is a former deputy director of the National Marine Fisheries Service and teaches at the University of New Hampshire. Thank you, Professor.

ROSENBERG: Thank you very much, Steve.

Rebuilding US Fisheries: Progress and Problems, by Andrew Rosenberg