A new report out this week ranks the top ten most polluted places in the world and details the sources of pollution, and the health effects on the people who live there. Host Steve Curwood talks with Richard Fuller, executive director of the Blacksmith Institute, which released the report.

CURWOOD: It’s Living on Earth. I’m Steve Curwood. Linfen (lin-fen), China, Sumgayit (Sum Kai eet), Azerbaijan, and Kabwe (Cub-way), Zambia share a dubious claim to fame. These three cities are among the most polluted places on the planet - that’s according to a new report compiled by the nonprofit Blacksmith Institute. It travels the world to document dangerously polluted sites and help clean them up. Each year the Institute compiles a list of the ‘dirty thirty’ and this year Russia, India and China are the worst offenders taking six out of the top ten spots.

Richard Fuller, the founder and director of the Blacksmith Institute has visited many of these most polluted places. 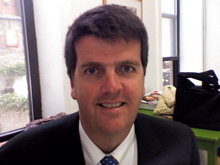 FULLER: I went to a town in Zambia called Kabwe about five years ago initially. And this is a place that mines lead and we went into schoolyards that were around the old smelter, which has since closed down but has left this plume of contamination throughout the town. And kids are running around, and they all looked a little sloppy. They all seemed a little dull in the eye. We went in and tested the school soil and the level of lead in the soil was at 20,000 parts per million. That’s ore grade! You could actually mine that soil in the schoolyard and make money out of it. Now lead is a neurological poison. It damages one’s nerves’ systems. And these kids are all mentally retarded. The whole town is actually retarded. And yet, no one in the town had told them that they were being poisoned from the heavy metal there. And when kids were going into acute toxic shock from lead contamination, the doctors, who were obviously controlled by the factory owners, were telling them that they had malaria. And they would treat them and get some of the lead out of their system and send them back home. It breaks your heart when you go to a place like that and you just see all these kids that just have no future in front of them.

CURWOOD: Tell me of another place you visited, what you saw, how you felt—what happened as a result of your visit?

FULLER: Sure, Steve. I was recently in a little village called Muslimova, which is in the central part of Siberia, and it’s downstream from a large industrial complex that makes plutonium. And in the early 60s, there was an accidental release of radioactive material that flushed all the way down the river—in fact, all the way down to the Arctic Ocean. It was an enormous release. It was three times the size of Chernobyl in terms of the amount of radioactive material that was polluting the area.

And the Russian authorities had a very interesting response. They moved most of the towns and villages down the river. They physically relocated them as soon as possible afterwards but they left this one village – I think its population is around 20,000 people – probably to study it, to see what kind of effects radio-nuclear would have on that particular population. And they’ve been extraordinary. You go there now and the houses are all shuttered. Everyone has died, or had cancers, or multiple cancers. The second and third generation people of that particular village have all kinds of diseases and mental problems.

A health worker examines a man sickened from scavenging in the lead mines of Kabwe, Zambia. (credit: Blacksmith Institute)

We’ve started doing some project work there, and I think because we’ve been there over the past two or three years, the government now has agreed that the survivors of this place will now get relocated to an area that’s clean and free of radioactive activity. So there’s something good coming out of it, but I tell you, it’s not a place I really like visiting too much.

CURWOOD: So, given that your top ten most polluted places, indeed the bulk of your ‘dirty thirty,’ are poor places—what does that say to you?

Young men look for metal near an abandoned lead mine in Kabwe, Zambia. Many children in the area suffer from severe lead poisoning. (photo credit: Blacksmith Institute)

FULLER: You know, it’s the poor that bear the burden for this for us. It’s the poor now, in countries that we no longer notice or see, that being hampered with the pollution from our own purchasing. We go out and buy items here that have been purchased using the blood and the pain of these people overseas, and it’s irresponsible for us to do that.

CURWOOD: So if this is related to our consumption habits, what things might we have in our homes in North America or in the rich parts of the world that would have come from the people who have been exposed to all of this pollution?

FULLER: Well, the problem, Steve, is that most of the poisoning is done at the early stages of manufacturing. It’s at the smelting level of lead or nickel, for example. Or it’s at the raw manufacturing process, when one is making textiles, for example, or petrochemicals. And it’s impossible to be able to say whether the nickel that you’re using in your kitchen or bathroom might have come from one of these highly polluted sites, because these things all get treated as commodities. But, there is a good chance that it does.

CURWOOD: Richard Fuller is the founder and director of the Blacksmith Institute. Thank you so much for discussing your report with me today.

CURWOOD: You can learn more about the most polluted places in the world and read the Blacksmith Institute report on our website, L-O-E dot org.