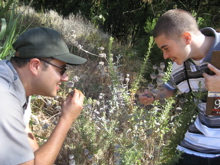 Traditional Mexican botanical medicine was alive and well when Antony Jauregui (HOW-re-gee) was growing up in Los Angeles. Now the Youth Radio reporter is trying to make sure he learns everything he can about it from his mother and other Latino naturalists.

JAUREGUI: For many generations, my family has passed down the Mexican tradition of growing medicinal herbs to treat and cure everyday ailments. Because I am growing up in the U.S., I am afraid that my connections to these plants might get lost.

It’s important to me not just to gain knowledge of these valuable plants, but to share it with people who could benefit from their use. Let’s go on a little scavenger hunt with my mom in her garden.

JAUREGUI: This is my mom admiring her epazote plant. We’ve used plants like these throughout my childhood. I’ve been gathering plant samples and taping them into my notebook, writing all I know about each one. Most of what I know of medicinal plants comes from seeing my mom use them. 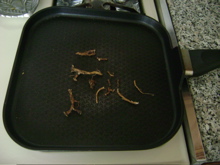 One of Antony's favorite medicinal concoctions is dandelion tea. Here he demonstrates the roasted dandelion root. (Courtesy of Youth Radio)

JAUREGUI: My mom says in her hometown everyone used herbs anytime someone got sick. She’s explaining which illnesses can be treated with herbs.

JAUREGUI: …insomnia, back pains, nausea, headaches. My mom’s list of herbal remedies cure all sorts of complaints. It’s my work now to continue her tradition, and I’m trying to learn as much as I can about the plants in my region. Let’s take a walk through the Santa Monica Mountains with Antonio Solorio.

SOLORIO: This plant right here—this tree I should say-- the willow is actually a medicinal tree. And the Native Americans original to this area, which are known as the Chumash, use this as a medicine.

JAUREGUI: Antonio Solorio is an ethno-botanist and park ranger who has been studying traditional medicinal gardens in east Los Angeles. 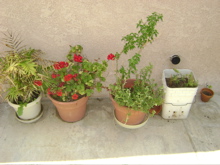 These are some of the home grown medicinal plants in Antony's mother's garden. (Courtesy of Youth Radio)

SOLORIO: The reason why I point this willow out, if you look at your aspirin you have salicylic acid in there and so this is right here the true aspirin, you know, the original aspirin or the original medicine for a toothache or a headache, etcetera.

JAUREGUI: Antonio Solorio has a very practical reason for why many families use backyard herbs as medicine.

SOLORIO: Growing up in east Los Angeles, in a working, poor family, we didn’t have a health insurance network. Our Kaiser was my mom’s backyard.

JAUREGUI: High healthcare costs have many Latino families, like Antonio’s, returning to traditional medicine. But certain plant medicines found in their home countries are not available here in the U.S.

SOLORIO: Not even in the local mercados that would cater to a certain cultural group. Also when you move to an urban area, your culture—certain practices are getting replaced and it’s kind of part of that whole process, I guess, of migrating. 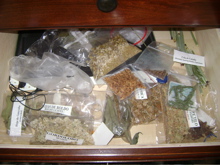 Antony is quite proud of his "loot": an assortment of dried and ground medicinal plants, which he has prepared himself. (Courtesy of Youth Radio)

JAUREGUI: Which gives many Latinos no back-yard alternative to expensive Western medicine. But some in the community prefer to turn away from medicinal herbs to shake a persistent stereotype.

HOLLIDAY: With Latino approaches sometimes there this idea of backwardness…

JAUREGUI: Karen Holliday is an anthropologist who spends a lot of time in botanicas, which are part-pharmacy, part-spiritual center, where many immigrants seek counseling for everything from back pains to bad luck.

HOLLIDAY: Immediately the way that Latinos were portrayed as well as the botanicas were superstitious, witchcraft, occult, devil worshipping, and that’s a very narrow way of looking at people.

JAUREGUI: People probably aren’t worshipping the devil at botanicas, but some powders and mixtures sold there are known to do more harm than good. Like when they contain poisons. One example is a powder called greta from Mexico that’s used to treat indigestion. It’s been found by the Centers for Disease Control and Prevention to have very high levels of lead. And there is another important reason to look beyond medicinal herbs, says Dr. Steven J. Brown from the AIDS Research Alliance in Los Angeles.

BROWN: Not to say there won’t be some certain interventions that affect the illness, but I think it’s important to make a distinction between the disease, which the patient has, and the illness, which people experience. Most cancers such as gastric ulcers, which has turned out to be a bacteria, need to be treated with antibiotics. Many neurological diseases such as Parkinson’s or Alzheimer’s can only be treated really medically. 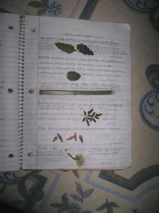 Antony cuts and pastes medicinal plants into his notebook, with information about each plant. (Courtesy of Youth Radio)

JAUREGUI: That leaves room for plant medicine and traditional healing to treat physical symptoms. And more than that. Working with my mom in the garden, I realize it’s also about the spiritual and mental satisfaction that comes from growing a plant and from preparing it.

I often prepare my own dandelion coffee and it’s actually the process in which it is made that has that soothing effect. It’s supposed to be an excellent tonic for the liver. It’s really good for circulation. Here I have some dandelion roots that we grounded, and we roasted and then we grounded. And I have it right here in my bag. Let me get the boiling water ready.

JAUREGUI: I put it in my mug and we can make some dandelion coffee.

JAUREGUI: And now I’m going to have a little sip.

[SOUND OF SIPPING TEA AND SIGH OF SATISFACTION]

CURWOOD: Antony Jáuregui is a correspondent for Youth Radio. He recently left Los Angeles to study environmental science and journalism at Northern Arizona University in Flagstaff.