Lake Baikal, the deepest, oldest, and largest supply of fresh water in the world, holds powerful sway over the hearts and minds of Russians. It also drew former Living on Earth Senior Editor, Peter Thomson, on a journey around the world to visit its majestic shores. He’s written about his experience there in his new book, “Sacred Sea: A Journey to Lake Baikal” and joins host Steve Curwood to talk about it.

CURWOOD: Lake Baikal, in the middle of Siberia, is no ordinary lake. One hundred eighty six miles long, one mile deep, and 25 million years old, Baikal is the oldest, deepest lake and holds more fresh water than any other lake in the world.

For Peter Thomson, a freelance journalist and former Living on Earth senior editor, Lake Baikal also holds countless stories waiting to be told. To get there, Peter and his brother, James, traveled across the Pacific Ocean by freighter to Siberia.

He writes about their adventure in his new book, “Sacred Sea, a Journey to Lake Baikal.” Peter, tell me about this amazing place—what does it look like? 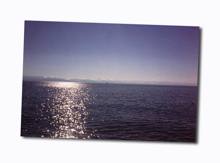 THOMSON: Well in the most basic sense it’s this huge blue crescent in the middle of what’s otherwise this very deep green boreal forest surrounding it that has been there and been growing for 25 million years, which is an extraordinary amount of time for a lake. Most lakes exist in a timeline of 10,000 years, maybe 100,000 years. There are a few that might be a million. This is an incredible outlier when it comes to the lifecycle of lakes.

CURWOOD: So, you go halfway around the world to this place. And you’re standing-- your first day-- on the shore of Lake Baikal. The van that’s taken you from the train station has broken down and there you are getting your first up-close look and touch of this place. I mean, was it everything you expected?

THOMSON: Well, it was and it wasn’t and it was a very weird experience, which I try to describe in the book although I’m not sure that I really captured it. We had been traveling through Russia for a week at that point and we were tired, we were a little bit sick, we were incredibly disoriented—my brother and I—and in a way it was this very anticlimactic experience. You know, you’ve traveled halfway around the world to this place that you have revered and that everyone who knows about it says, ‘Oh my God, I’ve got to get there!’ And you get there and you’re just sort of tumbled out onto the beach and all of a sudden there’s this water. And you go up and you look at it and you touch it and—it’s just water. 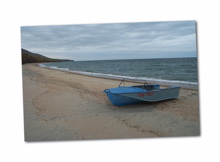 And yet, then you sort of stand back and you think about how much of it there is there, and how everywhere in the world there’s a shortage of this stuff-- people are fighting over it, there’s not enough of it-- and here is one fifth of all the water available in the world in this one place in the middle of Siberia. And it’s just kind of stunning to stick your hands in that and think about that and then you can reach down and take a drink of it and it’s like God just invented this stuff. And it’s just awe inspiring.

CURWOOD: You sure it wasn’t that Russian vodka?

THOMSON: Uh, actually, now that you mention it.

CURWOOD: What makes Lake Baikal so special? What makes it ecologically unique?

THOMSON: Well, it’s incredibly pure. And that’s a result both of sort of geologic processes and biologic processes and I think most people think of purity as something that’s, you know, a result of human processes but actually in Baikal it’s what scientists call oligotrophic, which means it has almost no nutrients or minerals in it. 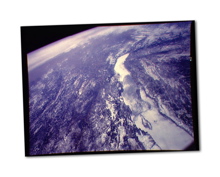 Part of that is because there’s very little runoff from the surrounding landscape but part of it is because it has these tiny little filter-feeding shrimp that are called epishura baicalensis and they are sort of the keystone species of the lake. They are incredibly efficient filter feeders and there are a million of them or so under every square meter of surface area and they filter the water incredibly efficiently--there are other filter feeders as well there are mussels and there are other crustaceans—and they are the basis of this animal food chain that goes from this unique little animal at the bottom called the epishura baicalensis up through a number of unique fish species like the golomyanka, which is called the angel fish or the candle fish, and is this weird, translucent fish that swims up right in the water column and is mostly oil and looks like an angel with wings.

And at the top of the food chain you have the world’s only unique species of freshwater seal. There is no other freshwater seal anywhere in the world than the Baikal seal, which is called the ‘nerpa’ locally. And it somehow made it’s way upriver from the Artic Ocean—2,000 miles of river—to this lake. 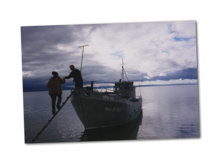 CURWOOD: So, you called your book “Sacred Sea.” How do the Russians view Lake Baikal? How sacred is it to them?

THOMSON: Well, it’s almost difficult to imagine—living in the United States. You know, we have a number of incredibly beautiful, revered places like Yosemite Valley and the Grand Canyon, which we think of as sort of these pinnacles of wonder in the natural world. But if you could somehow add a layer of religious fervor and deep nationalism to your engagement with those places you might have an idea of what it’s like to be a Russian imagining Lake Baikal.

And most of those people don’t make it there but on my way into the lake, I was riding in on the train and I spent most of my time looking out the windows and I was usually the only person in the hallway but all of a sudden I see a glint of blue out the window and the hall fills with people and they are singing. And they are toasting with vodka and tea. And I don’t know Russian but what I could understand was Baikal. They were singing this ode to their lake and it was an incredibly powerful and moving experience to witness that, and it gave me a sense that this was a place which was unlike anything that I’d ever experienced before in terms of their relationship to it.

CURWOOD: So, Lake Baikal is this amazingly pure, intact ecosystem but it faces an awful lot of challenges, you found.

THOMSON: Yeah, well, I mean I went in I think somewhat eyes wide open. You know, I knew that it was probably as close to intact as you can get for a large body of water like this but also that there were definite threats to it. 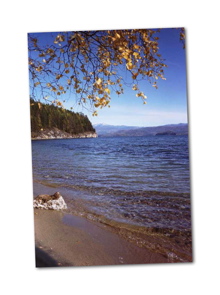 And in fact I had read one article that was headlined-- before I went there-- “The Killing of Lake Baikal.” It was certainly hyperbole, it was certainly overstated but it is definitely threatened. There is a significant amount of industry in the area. After the Second World War the Soviets literally picked up and moved factories to Siberia so that they’d be out of reach of any attack from the West. And many of them were built and rebuilt there in the Angara River Quarter just upwind from Baikal and because of the typography of the land around there even factories that are downstream are upwind and a lot of the effluent, a lot of the air pollution from them, comes and is deposited out over the lake.

On the other hand, there’s a lot of industry and cities upstream in Mongolia and Eastern Siberia that flow by river into the lake so there is real impact on the lake. And then there are a couple of paper mills-- one in particular that’s right on the lake-- that have a very strong local impact and traces of this pollution are found throughout the food chain, throughout the water, from top to bottom of the lake. So there are some real concerns there, to be sure.

THOMSON: Well I hope-- and this is one of the reasons that I wrote the book—I hope there does stand out as an example of a place where we heeded the warnings, where we decided not to go down the road that we had gone down just about everywhere else in the world.

I’m not certain that that will happen but I sure hope so because it’s entirely possible that we can do that. We know enough not to make the same mistakes there that we’ve made elsewhere, to pull back from the industrial impacts in the region, to build an economy there that is based on an intact ecosystem rather than at the expense of the ecosystem, through clean, low-impact industry, through a recreational economy, really, I mean it can’t be much more than that without having much of an impact.

It’s a very tough trick to turn as people are learning all around the world as they do try to develop what is called ‘ecotourism’ or ‘sustainable tourism’ but I think that Baikal is the kind of place where it’s still possible to do the right thing by nature and by the people who live there and there have been people there for thousands of years. So I hope in a hundred years that that will be what people remember and that this book somehow played a role in making that possible.

CURWOOD: Peter Thomson’s book is called “Sacred Sea: A Journey to Lake Baikal.” Thank you so much, Peter.

CURWOOD: To see photos of Lake Baikal and hear Peter reading from his book, go to our website, loe.org.

Science and the City