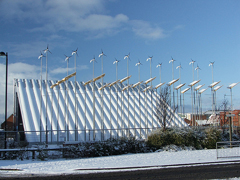 Congress is about to renew its effort to boost renewable energy. Similar proposals fell just short of final passage twice in recent months. Living on Earth's Jeff Young tells us the wind and solar industries are hoping the third time’s the charm.

CURWOOD: From the Jennifer and Ted Stanley Studios in Somerville, Massachusetts - this is Living on Earth. I’m Steve Curwood.

Congress is about to renew efforts to boost renewable energy. Democratic leaders say they want to repeal subsidies to the oil and gas industry and put that money instead into incentives for clean energy like wind and solar power.

Living on Earth’s Washington Correspondent Jeff Young is plugged into the energy debate and he’s here to tell us what’s at stake. Hi there Jeff!

CURWOOD: Jeff, this sounds familiar. The Democrats tried this before, right?

YOUNG: That’s right. The House of Representatives approved an energy bill last year that would take away oil subsidies and support renewable energy. But that fell one vote short in the senate. Then Democratic leaders tried to put incentives for wind and solar in the economic stimulus package. And again, that measure also failed in the Senate, by just one vote. Well now Democrats are hoping the third time’s a charm.

RANGELL: Well yes we think its very important it should have been passed and we just don’t just give up on things because the senate’s not cooperative.

YOUNG: That’s New York Democrat Charles Rangell. He chairs the powerful house Ways and Means Committee, which has just produced a 17 billion dollar bill to extend tax credits crucial to the solar and wind industries. Randy Swisher directs the American Wind Energy Association. He says those credits are set to expire at the end of the year.

SWISHER: This is way too familiar a story unfortunately.

YOUNG: The phenomenal growth in wind power is largely due to the production tax credit, which pays two cents on every kilowatt-hour produced by windmills. Swisher says there is generally strong support for the tax credit. So why has it twice failed to win final passage?

SWISHER: What has happened both times that this has come to the Senate floor is that it has been caught in the crossfire of much larger political battles.

YOUNG: And that could be the case again. Rangell and House democrats want to pay for the renewable energy tax credits by repealing oil industry subsidies. The powerful petroleum lobby and oil patch lawmakers will fight that, as they have before by arguing that the end result will be an increase in gas prices for consumers. Swisher’s worried that wind power’s growth could stall if the tax credits fail again.

SWISHER: There are millions of dollars at stake, many thousands of jobs. Our estimate is that if the credit is not extended, between the wind industry and the solar industry we see 116,000 jobs in the U.S. at stake. There are already companies that are reevaluating whether to make investments in new manufacturing capability. Those kinds of decisions are being made right now and with every month that goes by, the impact will grow.

YOUNG: Swisher and others are betting that the flipside of that equation will be a strong selling point to Congress. Growth in renewable energy jobs has been one of the few bright spots in an otherwise dim economic season. Rhone Resch is president of the Solar Energy Industries Association.

YOUNG: The pending bill would extend solar tax credits for up to eight years. Businesses could claim up to 30 percent of the cost of installing solar systems. Homeowners could get up to four thousand dollars in tax credits for going solar. Resch knows the politics will be tough but he has a, well, a sunny outlook.

RESCH: This is an election year and so what I think is different about this vote at this time is that there are many senators who are up for election who represent states that have large renewable energy industries developing and it’s time for those senators to support this legislation and reverse their “no” vote to a “yes” vote for renewable energy in the U.S.

YOUNG: And Steve, a few key votes to watch on this: Republican John Sununu who has a lot of solar and wind equipment makers in New Hampshire but voted against these tax credits last time. And the only democrat in the senate to vote against this was Louisiana’s Mary Landrieu, who’s a big supporter of her home state’s oil industry. Both of them face the voters in reelection this year.

CURWOOD: And Jeff what about the presidential candidates in the Senate?

YOUNG: Well both Hillary Clinton and Barack Obama have voted for renewable energy. Senator John McCain could have made the difference when renewable energy was up for a vote as part of that recently passed economic stimulus package but he missed the vote. And of course it failed by exactly one vote.

CURWOOD: And the current occupants of the White House, they’re both former oil men. Jeff, I’m gonna make a wild guess here and say that they’re against taking away oil industry subsidies.

CURWOOD: So it is the last year of the Bush Administration, any indications of what the President wants to get done on his way out the door regarding energy?

YOUNG: Well the President just sent his final budget to congress and it generally favors fossil fuels with subsidies for coal and there’s one curious item on oil. The President wants to completely fill up the nation’s strategic petroleum preserve, and that’s already meeting some resistance.

CURWOOD: The strategic reserve, now that’s the large underground supply of oil that’s kept in case of an emergency of some kind. What’s the objection to filling it up?

YOUNG: Well, it’s already nearly full, and of course oil is at near record high prices. So if you were to top off that great big tank so to speak, with oil at 90 or so dollars a barrel, well it’s really gonna cost a lot—something like 500 million dollars. So some key democrats in Congress are already floating a bill to stop that, they say, “Well this might be good for the oil industry to buy their oil when it’s at record high prices, but it’s not a very good thing for tax-payers, or the budget.”