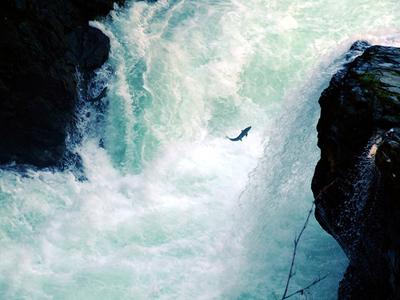 The Chinook salmon that spawn in the Sacramento River make up 90 percent of the wild salmon caught off the coast of California. But last year just a third of the salmon population returned to the river to spawn. Host Bruce Gellerman talks with Zeke Grader, executive director of the Pacific Coast Federation of Fisherman’s Association, to find out what happened.

GELLERMAN: From the Jennifer and Ted Stanley Studios in Somerville, Massachusetts – this is Living on Earth. I’m Bruce Gellerman, in for Steve Curwood.

GELLERMAN: At the famous Pike Place Market, in Seattle, you can get fish in all shapes, colors, sizes and stripes.

GELLERMAN: There’s one fish, two fish, red fish, blue fish – if you count the blue crabs. And ruling over all is the deep orange King Salmon, so-called Chinook. But this year, Chinook from California’s Sacramento River are going to be scarce. They’re mysteriously disappearing. Just a fraction of the adult salmon returned to spawn in the Sacramento River. And it’s not just the adults – at one hatchery, just four of 200 young fish released survived the 335 mile journey to the Golden Gate Bridge. 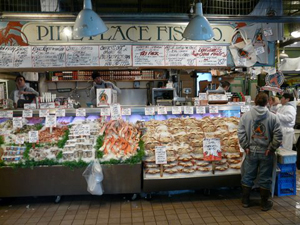 The salmon season is supposed to start on May first, but the Pacific Coast Fisheries Management Council is considering closing it all together. Zeke Grader is the Executive Director of the Pacific Coast Federation of Fisherman’s Association. Mr. Grader, welcome to Living on Earth!

GRADER: Thank you for having me!

GELLERMAN: What do you think is devastating the Chinook salmon fishery?

GRADER: Well, it’s a combination of factors. We did have a decline in productivity in the ocean in 2005, 2006 , but I think a bigger impact has been the excessive water exports from the Sacramento-San Joaquin Delta system, where 90 percent of the salmon that are harvested offshore California migrate through and use as nursery habitat.

GELLERMAN: So if a ban is put in place, fisherman won’t be able to catch salmon from northern Oregon to the Mexican border?

GRADER: Well certainly we’re expecting to see a ban or a near closure off of both Oregon and California, and Washington will certainly be restricted.

GELLERMAN: Well how are the fisherman that you represent responding to this idea?

GRADER: Well, they’re not happy with it, obviously, but I think the numbers are there and they’re not really disputing the numbers. They’re really looking at this from the standpoint of figuring out how they’re gonna be able to survive this year and perhaps next year with no fishing, and second, I think, looking at what can be done now to affect some changes in the way we manage the salmon’s habitat and the water flows that affect them in such a way that we’re not going to be looking at these similar situations again.

GELLERMAN: So how much money are we talking here if they have to shut down the fishery on May first?

GRADER: Well the figures vary widely. I’ve heard figures from the recreational fishery of billions of dollars. I don’t know – it depends how we calculate it. I think certainly one of the more conservative figures came from the New York Times at $150 million – I suspect that’s probably about right.

GELLERMAN: What is this going to mean for, well, for me, for a person who loves eating salmon?

GRADER: Well, for most of the country it won’t make that big a difference because most of their wild salmon will be coming out of Alaska, and Alaska is expecting to have a fairly good season again this year, and that’s certainly what we’d encourage people to do. 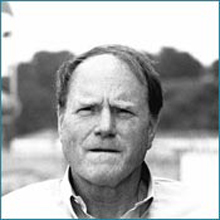 The bigger impact is really along the West Coast, where people are used to being able to have their own locally caught wild salmon, and of course that is not going to be available this year and probably next. We are expecting to be able to open again in 2010 and see fish back on the markets at that point. But it just means that there’s that much less fresh salmon on the markets, and moreover, the uh, California’s traditionally been a big supplier of the Chinook salmon, which are regarded – if you look at our salmon species as a General Motors – King Salmon is really the Cadillac of the salmon species.

GELLERMAN: You sound optimistic. We’ve seen this salmon fishery crash before, and it’s made a comeback. So you think it’s gonna come back again?

GRADER: Well, it can come back and it should come back, I think if we do the right things, and I think the critical thing now is going to be fixing the Bay and Delta, and that means basically curtailing any further water exports from that system, reducing them, and for California it means doing something that we should have been doing 30 years ago, which is decentralizing our water supplies and diversifying them

GELLERMAN: Zeke Grader is the executive director of the Pacific Coast Federation of Fishermen’s Association.