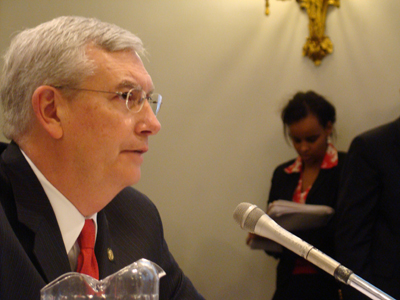 It's been almost a year since the Supreme Court's landmark ruling on global warming. But the Bush administration has still not taken the first step toward promised regulations on greenhouse gases coming from cars and trucks. Living on Earth's Jeff Young looks into whether the White House will act, or just run out the clock.

GELLERMAN: April second will mark one year since a landmark Supreme Court decision on global warming. In the case Massachusetts versus EPA, the court told the Environmental Protection Agency that the greenhouse gas carbon dioxide is a pollutant that can be regulated under the Clean Air Act. But nearly a year later the Bush administration has done little to respond. Living on Earth’s Jeff Young reports some critics are charging the White House is deliberately running out the clock on the court’s climate ruling.

JOHNSON: Let me begin by saying that I agree that climate change is a global challenge.

YOUNG: Johnson might feel a bit of warming just beneath him—he’s definitely in the hot seat.

YOUNG: What has critics like Washington Democratic Representative Jay Inslee so upset is Johnson’s response to last year’s Supreme Court case, Massachusetts v. EPA. In their 5-4 decision, the justices rejected Johnson’s argument that he lacks authority to regulate carbon dioxide. That was last April. Since then the Bush administration has missed its self-imposed deadlines to respond to the ruling. And a regulation on CO2 now seems unlikely before the end of the president’s term.

Last May, President Bush told the EPA to write a regulation to control greenhouse gases from cars and trucks.

BUSH: This is a complicated legal and technical matter, and it's gonna take time to fully resolve. Yet it is important to move forward, so I have directed members of my administration to complete the process by the end of 2008.

YOUNG: In a press briefing last June, Johnson said he would publish a draft rule for reducing greenhouse gases within six months. 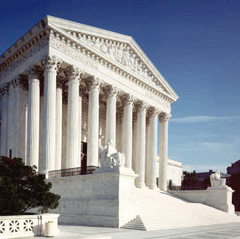 JOHNSON: My goal is to have that proposal out by the end of this year, that’s 2007.

YOUNG: 2007 ended with no proposed regulation. This month, Johnson told Congress he could not even predict when he would make the first decision along that regulatory path, what’s called an endangerment ruling. The Clean Air Act instructs the EPA administrator to say whether a pollutant might reasonably endanger public health or welfare. Johnson says he needs to think about it.

JOHNSON: Because a decision on one part of the Clean Air Act could have lasting consequences and unforeseen economic consequences. So that means any facility that would emit any CO2 would then trigger all the regulatory framework of the clean air act.

LIEBERMAN: Once it’s established under the Clean Air Act that these emissions are pollutants that endanger public health, then they would probably have to be regulated from a number of other sources – small businesses, even farms in a way that heretofore were only done to very large industrial facilities.

YOUNG: So your message is getting through?

LIEBERMAN: I would hope so. I don’t know where it came from, but it would seem the pitfalls of regulating CO2 in this way have been reflected by the administrator in his recent testimony.

YOUNG: Attorneys who sued the EPA say that’s not the way it’s supposed to work. Georgetown Law professor Lisa Heinzerling wrote the legal briefs that won in the Supreme Court. She says the court called for Johnson to make his decision about greenhouse gases based on the law and the science.

HEINZERLING: It’s not about the policies they might be afraid of, it’s not about their preferred approach to regulation, it’s not about liking the Clean Air Act, it’s about the science. And that was what we fought in Massachusetts v EPA—so I was really shocked to hear Mr. Johnson use exactly the same kind of reasoning to justify what he is not doing now.

YOUNG: Heinzerling says another decision by Johnson late last year shows he does recognize the dangers from greenhouse gases. Ironically, when Johnson denied California permission to regulate CO2 from tailpipes, he did so by pointing out that the entire country could suffer things like drought, wildfires and sea level rise.

HEINZERLING: What they said is rather odd, but what they said is climate change is going to be so bad everywhere that California isn’t different enough to justify its own program. Now, of course, EPA says no, that wasn’t an endangerment finding formally, that was just our decision here. But it would be like saying, oh the world is round but in the next decision saying no, sorry, in this context it’s flat. 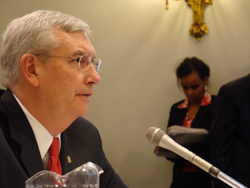 WAXMAN: In early December he sent his endangerment finding to the White House, and they’ve been sitting on it every since.

YOUNG: Waxman hopes his committee’s investigation will spur EPA to act. But with less than a year left in the Bush administration, it seems unlikely they will have time for the public hearings and the other work that goes into crafting a regulation.

WAXMAN: We might as a practical matter have to wait this administration out. But the EPA director is obligated under the law to act on his own judgment and Steve Johnson is gonna have to come to the conclusion what his judgment really is, what he sent to the White House as his judgment or what the White House tells him his judgment should be.

GELLERMAN: This landmark decision, has it achieved anything?

YOUNG: Well, you know, I asked that of the people who brought the suit and won it, and clearly they are frustrated that despite winning in the high court, they don’t have a whole lot to show for it just yet. But they do point to other indirect effects that the ruling is having. Kansas, for example, is one of the states fighting against proposed new coal-fired power plants. And Kansas’ governor has cited this Supreme Court’s decision and all of the uncertainty that it brings about how to deal with CO2 emissions, as one of the reasons to deny permits for coal-fired power. So it’s had a legal impact, but it’s too soon to say when or even if that’s going to translate into any real reductions in greenhouse gases.

GELLERMAN: Ah, the wheels of justice do grind slowly, Jeff.

GELLERMAN: Thanks. Jeff Young is Living on Earth’s Washington correspondent.

Georgetown Law’s overview of global warming in the courts