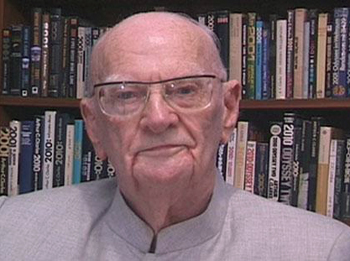 Arthur C. Clarke in a video greeting to NASA to mark the flyby of Cassini spacecraft last September. (Image: NASA)

Arthur C. Clarke was best known as the author of “2001: A Space Odyssey” but he was also somewhat of a prophet. He foresaw the development of telecommunications satellites in 1945 and dreamt of an elevator to space that some say may be in our future. Sir Arthur C. Clarke died at the age of 90, or, as he would have said, on his ninetieth orbit of the sun. Living on Earth pays tribute.

Arthur Clarke was born in 1917 in the English seaside town of Minehead, a full 2 years before a landmark paper was published demonstrating space travel was physically possible. As a young boy Clarke fashioned a telescope out of a cardboard tube and a couple of lenses, which he focused on the distant heavens. And he’d spend a few pence on the American sci-fi pulp magazine, Astounding Stories of Super Science – where years later he published his first science fiction story. Over his prolific career, he authored more than a hundred books and countless short stories, about advanced science and the human condition.

He wrote, “Any sufficiently advanced technology is indistinguishable from magic.” And Arthur Clarke was most certainly a masterful magician, weaving stories of far-flung frontiers and near-distant futures.

He foresaw high orbiting telecom satellites decades before they rocketed into space. Today astronomers call their place 22 thousand miles above the Earth, a Clarke Orbit.

CLARKE: In my time I have been very fortunate to see many of my dreams come true.

GELLERMAN: Of course not all of Arthur Clarke’s predictions, dreams and imaginings came true. He boldly anticipated atomic powered rockets and cold fusion with the same certainty as geosynchronous satellites. And another of his favorite predictions has yet to be realized – the space elevator – tethering orbiting satellites to earth.

CLARKE: I’m always asked when do I think the space elevator will be built. And I always say about ten years after everyone stops laughing. Maybe 20 years. But I am pretty sure that the space elevator is an important element in future space travel.

Arthur C. Clarke in a video greeting to NASA to mark the flyby of Cassini spacecraft last September. (Image: NASA)

GELLERMAN: Arthur Clarke often had the last laugh. He was optimistic about science, if not humanity. In his book, “The Hazards of Prophecy: The Failure of Imagination,” Sir Arthur laid out his so-called Clarke laws – the first: “When a distinguished but elderly scientist states that something is possible, he is almost certainly right. When he states that something is impossible, he is very probably wrong.”

GELLERMAN: On March nineteenth, Arthur Clarke died, as he would say, “marking his 90th orbit of the sun.” On the very day he died, astronomers discovered the first inklings of life beyond our solar system. Using the orbiting Hubble telescope, they detected the organic molecule methane and water in the atmosphere of a distant planet. We suspect Sir Arthur Charles Clarke would have been delighted.