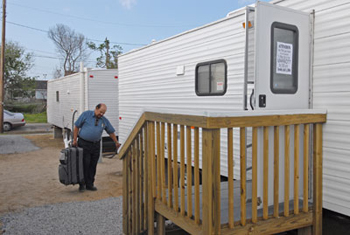 FEMA, the government’s disaster recovery agency, is evacuating people from trailers they provided as temporary housing after Hurricane Katrina, after determining the air was contaminated with formaldehyde. But as Living on Earth’s Ingrid Lobet reports, it took lots of pressure, including congressional hearings, to convince FEMA to make the move.

GELLERMAN: Of course, the poster child for levees that don’t hold back the water is New Orleans. Even today, over two and a half years after Hurricane Katrina struck the Gulf Coast, some 90 thousand former residents are still stuck in trailers provided by FEMA, the Federal Emergency Relief Agency.

But tests indicate a third of the trailers have dangerously high levels of the toxic chemical formaldehyde. And particularly vulnerable are children and the elderly living in the mobile homes. FEMA officials now say they’re relocating residents in trailers as fast as possible, but as Living on Earth’s Ingrid Lobet reports, it took persistent pressure from Congress and those displaced by Katrina to get FEMA to finally act.

LOBET: For sixteen months in 2006 and 7, Paul Stewart told his story to anyone who would listen. But he got his big chance last summer when he came to Washington and spoke before the House Committee on Government and Oversight.

STEWART: The first night we stayed in the camper, my wife woke up several times with a runny nose. At one point, she turned the light on and realized that her runny nose was actually a bloody nose. I was also beginning to show symptoms of my own, which included scratchy eyes, scratchy throat, coughing and runny nose.

LOBET: Stewart kept an air filter running, but the couple's symptoms continued for weeks and months.

STEWART: And we finally thought about just leaving, but at the time we couldn’t leave. We were still fighting with the Army Corps of Engineers, with FEMA. We had debris all over our yard, money was short and we were stuck. 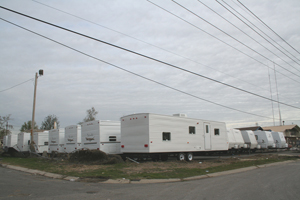 LOBET: Stewart testified that each time he called FEMA, he was just told to open the windows.

LOBET: Finally, Stewart ordered a kit and tested the air in his own camper. Formaldehyde levels inside, with the windows open and an air filter running, measured 220 parts per billion. That's 27 times the government safe level for long-term, round-the-clock exposure. FEMA employees on the ground on the Gulf Coast heard many complaints similar to Paul Stewart's. They urged their bosses to test other mobile homes. But according to documents obtained by congressional subpoena, FEMA attorneys said ‘no,’ because the agency could be liable for what it found.

Following last summer's hearing, officials did finally test more than 500 trailers. Formaldehyde levels in many of them were high enough to sicken a significant segment of the population. So now, FEMA has redoubled its efforts to move people into permanent housing, scarce in many parts of southern Louisiana and Mississippi.

Throughout the FEMA trailer controversy, some officials have expressed uncertainty about harmful levels of formaldehyde, a toxic irritant and carcinogen. This is FEMA administrator R. David Paulison at last summer's Congressional hearing:

PAULISON: Despite 30 years of research and reports on numerous federal agencies, there is now no existing consensus on safe formaldehyde levels in residential dwellings, so again we are looking to the experts for advice.

LOBET: More recently, FEMA fact sheets reassuringly said that formaldehyde levels in trailers were lower than what workers are allowed to be exposed to in an eight-hour shift. And a local newspaper reported this month a public health service officer told people in Mississippi the long-term effects of breathing high levels of formaldehyde is unknown. We contacted his boss, Michael McGeehin, Director of the CDC’s Division of Environmental Hazards and Health Effects, to ask if this reflects the agency's view.

MC GEEHIN: Except for that the fact that formaldehyde is a known carcinogen, yes the long-term effects are not well established and need more research.

LOBET: The state of California sets its own limits for air contaminants. State toxicologist Richard Lam doesn't agree there's a shortage of information about formaldehyde.

LAM: Well, actually, the information on formaldehyde is pretty well documented. You look at acute effects, there is a lot of information about that…the long-term effects there is. But there are certain information missing, for example, effects on the reproductive system, but there is a pretty great database on it causing cancer.

LOBET: Formaldehyde in low concentrations surrounds us; it's in roadway exhaust, draperies and the exhaust from gas appliances. California has set a goal of two parts per billion in indoor or outdoor air, a level the state's experts say presents no health risk. That's four times stricter than the federal government's minimal risk level.

In order to remove formaldehyde from the air, California is now cracking down on major sources of the gas in people's homes, including plywood and particleboard. The new rules will reduce emissions by more than half in three years, beginning in July. The Sierra Club is lobbying EPA to take these rules nationwide.

Richard Lam says the thing to remember is that substances that cause cancer have no safe threshold. So the goal is to minimize any extra exposure.

LAM: There is no level at which exposure to a carcinogen is considered safe.

LOBET: Meanwhile members of Congress continue to investigate whether federal health agencies, including the CDC, retaliated against a federal scientist who voiced concerns about FEMA trailers and whether they diluted warnings about the health consequences of formaldehyde levels in the homes. The next hearing is April 1st.


To read about the findings on air quality in FEMA trailers, click here