A Whole Foods store in Connecticut is the first supermarket in the country to get all its power from a stationary fuel cell. Host Bruce Gellerman talks with Bob Remick, director of the National Renewable Energy Lab, about how fuels cells work and the promise of fuel cell technology.

GELLERMAN: Now, from negawatts to the aisles of a natural food store. Alongside the organic tofu and handmade goat cheeses, a Whole Foods Market in Connecticut is taking its green image one step further by opting for clean energy – from a fuel cell.

Bob Byron is with UTC Power, which supplied the new power source:

BYRON: The fuel cell that's positioned at Whole Foods right now is providing 50 percent of the store's electrical needs. With our upcoming product, the 400kw product, we'll be able to provide just about all the power requirements of that store.

GELLERMAN: The fuel cell isn’t new. The basic electro-chemical process was discovered more than 150 years ago, and was used in the 1960’s to supply electricity to spacecraft and lunar landers. Talk about living off the grid. Well, today, fuel cells are finding more down-to-earth applications. We turn to Bob Remick, director of Hydrogen Technologies and Systems Center at the National Renewable Energy Laboratory.

REMICK: The fuel cell itself is very straightforward chemistry. One of the problems is they run very well on hydrogen and oxygen from the air. The question, of course, is hydrogen doesn’t grow on trees. You can’t punch a hole in the ground and find hydrogen like you can natural gas.

GELLERMAN: So, the trick is to get low-cost hydrogen. How might you be able to do that?

REMICK: Well, obviously, hydrogen from natural gas costs a lot of money, but hydrogen from methane produced by anaerobic digestion is cheap – in fact, it's almost free. And you then go to things like food-processing plants – there's an onion manufacturer, Otis Onions in California, or a brewery – where you've got anaerobic digesters digesting organic biomass. And they make the methane and they can use that methane to fire fuel cells and make their own electricity right on the site.

GELLERMAN: I love it. Power plant of the future fueled by onions.

REMICK: Onions, uh, the leftover from hops, anything you've got that's digestible. The beauty of that is the methane is coming from biomass, from organic material that was grown. So that biomass removes carbon dioxide as it grows, you use it in the fuel cell to produce electric power, the carbon dioxide goes back into the atmosphere. It's a closed loop; it's a zero-sum game. 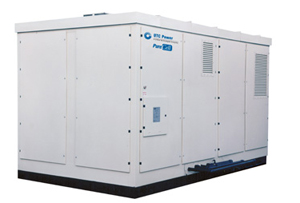 Whole Foods is turning to stationary fuel cells like this to power its grocery stores. (Courtesy of UTC Power)

By locating a fuel cell right next to your business or even your residence, you can use that waste heat to heat hot water, to provide space heating. So I've actually increased the efficiency of the use of that natural gas from forty to fifty percent for just powering electricity to eighty to ninety percent where I’m doing both electricity and power. That reduces by a large amount the carbon dioxide emissions going into the air, the greenhouse gases.

GELLERMAN: And how much power would a fuel cell produce?

REMICK: Well, obviously, they're sized right now – fuel cells are sized everywhere from operating your cell phone all the way up to megawatt.

GELLERMAN: Did you say a fuel cell for my cell phone?

REMICK: Yeah, there are fuel cells being developed by Sony and Panasonic, for example, that will be used running on alcohol cartridges and would give you extended play on your cell phone or your computer, using the example here of backpacking up in the Colorado mountains for a week and having your computer available the whole time without ever worrying about your batteries running down. Start to run out of fuel, you pop in another fuel cartridge. Those are going to be hitting the market within a year or two.

GELLERMAN: Wow. So when will there be a fuel cell powering my house?

REMICK: Actually, you can probably buy a fuel cell to power your house right now. The problem there is the price of that’s probably $40,000, so it's a little bit too expensive for you to want to go out and buy it for your house.

GELLERMAN: Why is it so expensive?

REMICK: Well, part of the problem is the way they're being manufactured. The manufacturing of fuel cells is done – I use an analogy, the way Boeing makes jetliners on an assembly floor with people running in and out putting parts onto it. What they need to do is learn to transition to the way Chrysler makes automobiles, on an assembly line with a lot of robotics doing it so that – to bring the price down.

One of the ways of doing that is to start selling a lot of fuel cells, but that's sort of a chicken and egg problem – how do you sell $40,000 fuel cells to get the numbers up so that you can bring the price down.

GELLERMAN: But because of the cost, you still have very specific applications for which this is cost-effective and it's not for general use yet.

REMICK: Yeah, there are fuel cells being sold right now for what are called “premium power applications” – there's a place where I absolutely have to have electricity twenty-four/seven. The police station in Central Park in New York is running on a fuel cell. Doesn't matter what happens to the grid in New York, they have the power to run that police station and run their communications. Also, fuel cells are being installed in banks that have large credit card operations. So, these are places where they’re being put in right now at the high price they cost.

But that’s not gonna get the production up to where you can get the price down. So that’s where things like the government incentives come in, where you have the federal government who are actually giving you incentives, tax incentives or actual cash back if you buy a fuel cell. Connecticut is helping to buy down the cost of those fuel cells, so people like Whole Foods can buy a fuel cell, and now they can make a good business deal for actually installing what otherwise would be a very expensive fuel cell in their operation right now, and see a payback on it.

GELLERMAN: So, what are we waiting for?

REMICK: There's a lot of customers out there that haven't yet recognized there's a product on the market that might help them. The problem is you've got to build those large manufacturing facilities that can produce fuel cells cheaply. That's going to require a lot of investors. That's not an easy thing to do in this current environment.

GELLERMAN: Bob Remick is director of the Hydrogen Center at the National Renewable Energy Laboratory in Golden, Colorado. It's not far from the Coors brewery. I guess you'd get plenty of feedstock from there.

REMICK: Yes, you would.