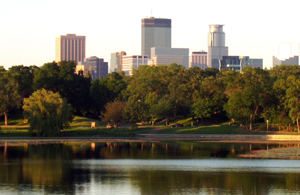 Minneapolis has been ranked the 11th greenest city in the United States. (Photo: Dan Oldre)

Minneapolis Mayor R.T. Rybak tells host Steve Curwood about the unique environmental projects that have made Minneapolis one of the greenest cities in the country.

CURWOOD: From a sustainable city in Brazil, we take you now to the City of Lakes… Minneapolis, Minnesota. Earlier this month Minneapolis released its 2008 GreenPrint Report, updating progress that city has made towards its sustainability goals. R.T. Rybak is the mayor of Minneapolis and he joins me now on the line to talk about the greening of his city. Mayor Rybak, welcome to Living on Earth! 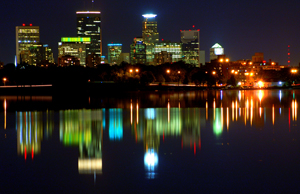 CURWOOD: Now, Popular Science magazine recently rated Minneapolis the eleventh greenest city in the country – and I suppose you –

RYBAK: We demand a recount.

CURWOOD: You demand a recount? Well, St. Paul was twelve.

RYBAK: (laughs) Well, that’s a wonderful thing. I think Minneapolis is doing some wonderful things. So are a lot of other people around the country too.

CURWOOD: Well, congratulations – but, of course, what are you going to do to be number one?

RYBAK: Well, I think one of the most important things is really engaging our citizens to be involved in those both big and little things that will make the city sustainable. So, uh, we’ve challenged everyone to be part of the, what’s called the Minnesota Energy Challenge. They look at their own lifestyle – the city does as well – and we collectively try to reduce, uh, as much of our CO2 as possible, and, uh, so far we’ve had about 3100 citizens sign up to save 21 million pounds.

CURWOOD: Tell me about, uh, your specific grant program to help Minneapolis deal with climate change.

RYBAK: We put out micro-grants, uh, $1000 to $10,000, and had a series of actions – some as small as a community organizing group working with Somali women, teaching them to ride bicycles so they can commute that way. Another neighborhood organization distributing clothes lines to replace dryers. A lot of community organizing along the idea of what you can do in your own neighborhood.

CURWOOD: What can a city like Minneapolis do in the face of gasoline headed to $4 and $5 a gallon or more, and of course it does generate carbon dioxide when it comes back out the tailpipe. In particular, what are you doing to get people out of their cars? 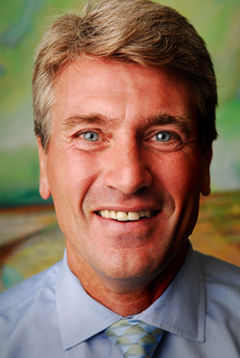 R.T. Rybak has been the mayor of Minneapolis since 2001. (Courtesy of Mayor R.T Rybak’s office)

RYBAK: Clearly, there are many things you can do to attack climate change, but if a third of our greenhouse gases come from cars and traffic, then the, uh, the single largest issue is alternative transportation planning. That, in our city, has meant, building light-rail lines; we’re now looking at streetcars within the city; we’re developing bus rapid transit; and we’re happy to say that almost half of the 165,000 people who work downtown come there in some way other than a car.

Minneapolis’ climate is not perfect in the winter –

RYBAK: But it is the second best bike commuting city in the country. And that’s what’s so incredible about the people here, is it’s not an impediment.

CURWOOD: The Mississippi River runs right through the middle of parts of Minneapolis. It’s not particularly clean there. What are you doing to improve water quality?

RYBAK: One of the things that happens when you get a new job like mayor is that they give you a bunch of dirty little secrets you didn’t know about when you first, uh, wanted the job.

RYBAK: In my second week in office, they came in and told me about what was called combined sewer overflow – that when there were extreme rains, that our system would overflow and raw sewage would go into the Mississippi. Well, that was obviously not something that we could tolerate. So we launched a very aggressive program to prevent those overflows, and it involved working with building owners to have them disconnect from the sewer system. It dealt with giving credits to homeowners for permeable surfaces so the water would seep in. Rain gardens, roof top gardens. And I’m really proud to say that as of last summer, we had no incidents of that – which was very good.

Minneapolis was ranked the 11th greenest city in the United States.(Photo: Dan Oldre)

It’s also important in a city that is filled with, not only the Mississippi River, but many many lakes, that we continue our aggressive street-sweeping and educate citizens that their lawn is a beach – anything they put on there goes right into the lakes. And if you don’t want to swim in it, don’t put it on your lawn.

CURWOOD: In the short term, though, how do you pay for all this?

RYBAK: Well, you have to make choices, and there is a, green premium that people pay, and I think that’s wrong – but I think we also have to take those aggressive steps, even if it means a little more in the short term. And I think we need to get ourselves back in harmony with the planet. That doesn’t mean having your head in the sky. But it does mean really laying out to citizens what’s at stake here.

I talk a lot about the natural beauty of the extraordinary place we call Minnesota. And Minnesota sits, um, in a pre-settlement, where the big woods met the prairie. If we think about that, and think about the poetry of a prairie and a big woods, think about a place where water flows in three directions – people begin to reconnect with the, uh, the land that they’re part of. You do not destroy something you love. And I think we have so taken our land for granted, that the more we connect people back to the magic of the places we live in – the more they will respect them and take the tough actions that we all need to take to be, uh, living in better harmony.

CURWOOD: R.T. Rybak is mayor of Minneapolis, Minnesota. Thank you so much, Mr. Mayor.

RYBAK: Thank you. It’s fun to talk about this.