News from the Trees 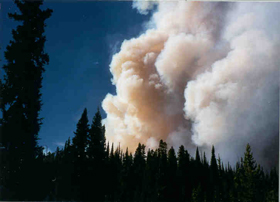 Record wildfires have helped create a backlog of more than a million acres of national forest that need to be replanted. (Courtesy of the U.S. Forest Service)

This arbor day, Host Bruce Gellerman talks with Arbor Day Foundation spokesman Woody Nelson about putting the trees back in U.S. National Forests after years of destructive wildfires. The foundation made a hardiness zone map reflecting warmer temperatures but the USDA has yet to update its map from 1990.

GELLERMAN: It’s Living on Earth, I’m Bruce Gellerman. So, have you hugged a tree today? Better yet, have you planted one? We are, after all, celebrating Arbor Day.

Trees give us fruit, shade, wood, and fight global warming by taking carbon dioxide out of the air. And they're not bad to look at. We’re talking trees with Woody Nelson, spokesman for the Arbor Day Foundation. Hi Woody.

GELLERMAN: Or should I say, Happy Arbor Day!

GELLERMAN: Well it was started where you are, in Nebraska, way back when.

NELSON: 1872 to be exact. On that very first Arbor Day, a million trees were planted on the Nebraska prairie.

GELLERMAN: So what is the Arbor Day Foundation doing this year to commemorate that special day?

NELSON: The Arbor Day Foundation celebrates tree-planting every day of the year. This year we have a campaign where we’re helping the U.S. Forest Service plants trees in our National Forests. We also have a program called ‘Nature Explore’ to inspire the next generation of tree planters: young children, getting them connected with nature at a very early age. 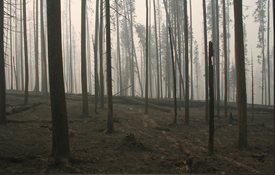 Trees in Payette National Forest in the wake of a 2007 wildfire. (Photo: Dan Lubman)

NELSON: The U.S. Forest Service is charged of course with taking care of our National Forests. They are today a rather threatened legacy, in that we’ve had three years in a row of record wildfires. Unfortunately so much of their budget is being allocated toward putting out these massive fires, and, they have very little resources left for replanting where they deem replanting is necessary.

GELLERMAN: I thought fire was a natural part of the forest ecology?

NELSON: Fire is definitely an important part of natural forest ecology, you’re right. Today’s fires, however, are raging and immense and burning very, very hot. There are many, many more manmade fires than ever before. If you just look at history, we’ve had eight or nine million acres of fires burning each of the last three years. And that’s really unprecedented. 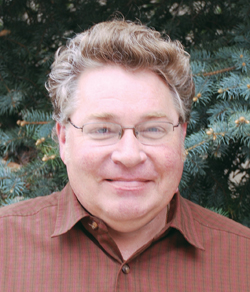 Of course we like Mother Nature to take care of things. The Forest Service, by all means, does not plant in designated wilderness areas. They do not plant where they think there’s a good chance that nature will regenerate the forest on its own. But yet, after several years it becomes very clear that nature is not going to regenerate a particular forest area, and when that happens, you know, the invasive scrub grows prolifically and doesn’t give trees a chance to grow, and that’s where they need to go in and do managed planting.

GELLERMAN: I was reading that fire isn’t the only threat to our National Forests – that there’s actually this beetle in Colorado. What’s that about?

NELSON: Yeah, the mountain pine beetle, which is a pine bark beetle species. It’s really playing a heavy toll in the Rocky Mountain West. It really is prolific these days, the past few seasons, and it’s just destroying thousands of trees.

NELSON: You know, one way that nature can control the pest is sustained cold temperature – say, minus 30 degrees for five days in a row – that larva’s going to not survive the winter. I would say this year’s probably going to be another epidemic. You know, I think the Forest Service is, you know, concerned about how this pine bark beetle is infesting our National Forests.

GELLERMAN: So in order to kill this pine bark beetle, you have to have sustained cold – you’re suggesting that it’s getting warmer there.

NELSON: That’s right. The data indicates that much of Colorado, much of the Rocky Mountain states have warmed a full hardiness zone, which – a hardiness zone is measured in ten -degree increments.

GELLERMAN: A hardiness zone is that thing we see on the back of seed boxes where you can – where to plant seeds, when, that kind of thing?

NELSON: That’s right. It’s a guide – it’s one tool for a tree-planter or for a gardener to use in trying to make the best decision on what species will be hardy where he or she lives.

GELLERMAN: ’Cause you have a hardiness zone map that’s interactive on the Arbor Day Foundation’s website.

GELLERMAN: Now, when I click on this button here, it shows the whole map going north – everything’s moving up, everything’s getting warmer.

NELSON: People can start to experiment with perhaps a flowering species where they, you know, fifteen, twenty years ago that would have been unheard of. The data shows that between 1990 and the 2006 arborday dot org hardiness zone map, there has been a shift where hardiness zones are migrating northward, and of course that means that the data shows that our climate has warmed.

Record wildfire seasons have helped create a backlog of more than a million acres of national forest that need to be replanted.
(Courtesy of the U.S. Forest Service)

GELLERMAN: And the USDA also has hardiness zone maps, but yours is different from theirs.

NELSON: We have the most up-to-date information available in building our map. We used 15 years’ worth of data from 1991 to 2006. The USDA last updated their hardiness zone map in 1990. I understand that the USDA is working on it – they have been working on it for some time. For whatever reason, they’ve not published an update to their map now for – well it’s been 18 years, and the data indicates that things are warmer today than they were in 1990.

NELSON: My real name’s Woodrow, so it’s, it’s not a coincidence, I guess, it’s just – it’s a real name for a real purpose.

GELLERMAN: Well Mr. Nelson, thank you very much. It was a real pleasure.

NELSON: Oh, thank you for having me. It was my pleasure.

GELLERMAN: So why hasn’t the United States Department of Agriculture released a new hardiness zone map in almost 20 years? I put the question to the USDA’s Kim Kaplan.

KAPLAN: Well there’s actually been no set interval between any two editions of the USDA Plant Hardiness Zone Map. One of the things that drove this one, frankly, is that the government printing office called and told us they were out of the old one, and should they print the same one again or were we going to do a new one. Because the old one was done in 1990 and predates the internet, it was not digital, and we knew we wanted to go to something that was state-of-the-art – something GPS, GIS compatible, much more detailed and much more sophisticated and most importantly web-friendly.

GELLERMAN: But that’s 18 years ago. You said you were coming out with one, what, two years ago.

KAPLAN: Right, and one of the things we’ve discovered is that it’s very difficult to do some of the state-of-the-art things that we’re trying to do. We want to get it right rather than fast.

GELLERMAN: So when can I expect the United States Department of Agriculture to come up with its next Hardiness Zone Map for planting?

KAPLAN: Well, the best I can say is soon, and maybe define that as months rather than weeks or years.

GELLERMAN: So as I say in Boston, when your new map comes out, aloha? (laughs)

KAPLAN: (laughs) I don’t think you’ll find it will be that warm.

GELLERMAN: Kim Kaplan is a spokesperson for the United States Department of Agriculture.