Music with a Message in Mozambique 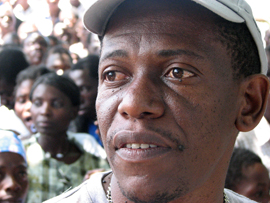 One of the winners of this year's Goldman Environmental Prize - considered the Green Nobel - is singer-activist Feliciano Dos Santos of Mozambique. Dos Santos founded the NGO Estamos to bring clean water and toilets to his war-torn nation, spreading the message of hygiene through the music of his band Massukos.

GELLERMAN: Feliciano Dos Santos is known as the Elton John of Mozambique…

GELLERMAN: Feliciano Dos Santos comes from Niassa Province in Northern Mozambique. There are few places on the planet so impoverished. 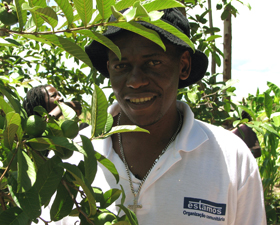 GELLERMAN: The province is about the size of New England, yet it has only 100 miles of paved roads.

DOS SANTOS: Five or seven years ago Mozambique was considered the poorest country in the world, so you have to imagine what kind of life we had. But with the hope; we survive with the hope. So for this reason I’m here today.

GELLERMAN: The day we spoke with Dos Santos he was in Washington D.C. to pick up his Goldman Environmental Prize. It’s considered the Green Nobel. The Prize is awarded annually to seven winners. Each receives 150 thousand dollars for grass roots environmental work. Dos Santos won for improving hygiene and sanitation in Mozambique. 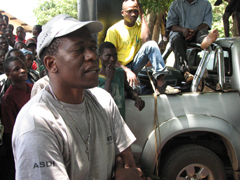 GELLERMAN: Do remember where you were when you heard that you won the Goldman Environmental Prize?

DOS SANTOS: Yes I remember I was in my house with a friend of mine and my wife, and they call me and they say, ‘Are you Feliciano,’ I say yes and they say ‘Yes, you won a prize, Goldman Environmental Prize,’ and I was feeling it was a joke and someone I knew called me and they say ‘wow, yes it’s true, congratulations.’ And I just cried and, yeah it was, you know, it was…yeah definitely is something come from the gods, you know?

GELLERMAN: The gods have not always been so good to Dos Santos or Mozambique. The African nation was devastated by 19 years of civil war, and sanitary facilities and clean water were almost non-existent. As a boy Dos Santos got polio because of the poor conditions. It left him with a limp. But despite his handicap he went on to start his band, and create Estamos, a public health organization dedicated to bringing clean water to remote villages in Mozambique, and building what he calls Eco-San Latrines.

GELLERMAN: So you build this very shallow latrine, or actually two holes –

GELLERAMAN: And then as I understand you fill it up with ash and then you wait –

GELLERMAN: And it turns into fertilizer, and then you use that on the crops.

DOS SANTOS: Yeah, and they use it on the crops, and you know there is a lot of advantage in that. You know, when you wash your hands, every time you wash your hands after you use latrine, so you avoid 40 percent of disease related to water.

GELLERMAN: Ah, I see. So, do you have a song that is about toilets?

DOS SANTOS: Yes, I have it.

DOS SANTOS: Music say that mothers listen to me, community listen to me – improve the latrine, huh? It’s so beautiful. It’s easy to clean and easy to build, so use it; it’s good.

GELLERMAN: Mozambique was a Portuguese colony, but you’re not singing in Portuguese are you?

DOS SANTOS: No, you know what happened was when we decided to have a band, we decided to preserve our culture, because during the civil war we lost so much because many people went to Malawi, went to Zambia, Tanzania. And we decide to, you know, to recover our culture and we say, ‘well, there is no music singing in our local language, so why not produce songs with our local language and with traditional rhythms.’ So we decide not to sing a lot in Portuguese. We just have one song in Portuguese; the rest is in traditional – in local language, because, you know, we need to, you know, to value our culture, to value our language. 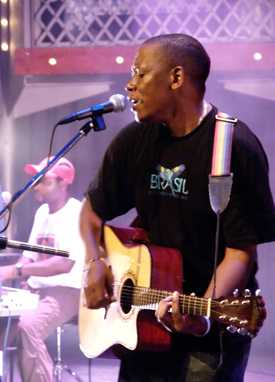 GELLERMAN: Let’s listen to one of my favorite songs – actually there’s two versions of this song on the CD – Pangira? Did I pronounce that right?

GELLERMAN: What does pangira mean?

DOS SANTOS: On the road, yes.

DOS SANTOS: You know, some couples, they abandon their children in the road, but the children will grow and someone take him and give his name.

DOS SANTOS: So it’s so sad, because when he grow, people just tell him that, you know, this name is not yours, because your father abandoned you in the road. And he was crying to claim that I need to know who was my father.

DOS SANTOS: I’m physically, you know, challenged as a man, and you know, people – when you have polio some people think that you also have a mental challenge because they think that you know, you are crazy guy. But with the music – music can give you a power to believe yourselves, and also music have power to join people, to spread messages, to awareness people, to raise awareness people. 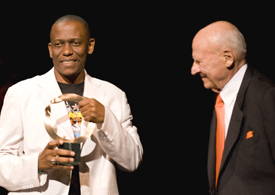 Feliciano dos Santos accepts the Ouroboros from Richard Goldman at the 2008 Prize ceremony in San Francisco. (Photo: Courtesy of the Goldman Environmental Prize)

GELLERMAN: You know, Feliciano, you grew up in a country where you had to worry about your next meal. What made you pick up the guitar, and sing and start writing songs?

DOS SANTOS: Well, I just – something come from my heart and I say, ‘well I have to write songs because I want to share with the people.’ But first of all I have to say that when I write songs, I write first of all for me, for myself. Because if the songs touch me, it means that it can touch someone. You know, there is a lot of musician produce music and people don’t like it, but themselves like it. So the first thing I do is produce a song for me – can I fly, you know. Because when I listen, when I sing my songs I can fly in the sky.

GELLERMAN: Well let’s go out on a tune from you latest CD ‘Bumping.’ Pick one – which one would you like to do?

DOS SANTOS: Niassa. Niassa is the province where I’m come from, where I’m living. And the lyrics say that I’m not ashamed to born in poor place, and that I’m proud to born in that place, and I will sing loud about my country about the place where born.

GELLERMAN: Well Feliciano, thank you very much, I really enjoyed our conversation.

DOS SANTOS: You’re welcome, thanks so much for inviting me.

GELLERMAN: Feliciano Dos Santos of Mozambique – one of this year’s winners of the Goldman Environmental Prize, and founder and lead singer of the band Massukos. Their new CD is called ‘Bumping.’

Our interns are Annie Jia and Margaret Rossano. Jeff Turton is our technical director. Alison Lirish Dean composed our themes. You can find us at LOE dot org. Steve Curwood is our executive producer. I'm Bruce Gellerman. Thanks for listening.

ANNOUNCER1: Funding for Living on Earth comes from the National Science Foundation, supporting coverage of emerging science, and Stonyfield Farm – organic yogurt and smoothies. Stonyfield pays its farmers not to use artificial growth hormones on their cows. Details at stonyfield.com. Support also comes from you our listeners, the Ford Foundation, the Town Creek Foundation, the Oak Foundation, supporting coverage of climate change and marine issues and Pax World Mutual Funds: socially and environmentally sustainable investing. Pax World: for tomorrow. On the web at paxworld.com.


To hear and watch Massukos, check out the band’s website