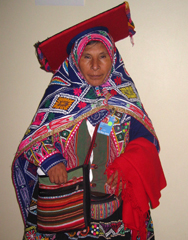 Hilaria Supa is a Peruvian congresswoman and an activist for human rights and protection of the environment. (Photo: Bobby Bascomb)

Despite their geographic differences, indigenous people often have similar problems when it comes to the environment. Living on Earth’s Bobby Bascomb reports.

GELLERMAN: Indigenous peoples, who often live at the bottom of the economic ladder, are also those most at risk from climate change. Now they’re making their voices heard at the United Nations. Living on Earth’s Bobby Bascomb went to the UN’s Permanent Forum on Indigenous Issues and has our report.

BASCOMB: There are seven coal-fired power plants within 100 miles of the Three Tribes reservation in New Town, North Dakota. Kandi Mossett grew up on the reservation. She blames the energy industry for the strange sores and tumors subsistence hunters notice when they cut open fish and game.

MOSSETT: The Elders say what happens to the animals will happen to us.

BASCOMB: What’s happening to Mossett’s tribe is cancer. Studies show that cancer rates among Native Americans are 13 percent higher than in whites.

MOSSETT: I myself had cancer at the age of 20. My grandfather has already survived prostate cancer. And it’s not necessarily even the older folks. It’s the children. We’re seeing leukemias. We’re seeing all these babies that are dying. Six months old and they have cancers. 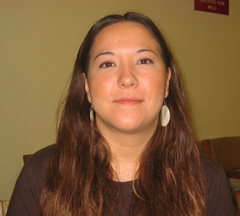 Kandi Mossett is an organizer for the Indigenous Environmental Network. She is a member of the Mandan, Hidatsa and Arikara Nations whose reservation is located near New Town, North Dakota.

BASCOMB: Mossett is an organizer for the Indigenous Environmental Network. She says that from Canada to Bolivia, native people tell the same tale.

BASCOMB: Hilaria Supa is a member of Peru’s congress. Her skirt and shawl are embroidered with the brightly colored patterns of her Quechua people. Gold and copper were discovered on native lands in Peru, and Supa worries about how they are mined.

TRANSLATION VOICEOVER: They use a mining technique called open pit mining. The chemicals used mainly uranium, sometimes mercury. They run off from the mountains where they’re mining down hill and get into the community rivers to the lakes to the underground water.

BASCOMB: Supa says studies have found that indigenous children who live near these mines have seven to ten times the acceptable level of lead in their blood.

MALEZER: Well, the impact is definitely greater upon the indigenous peoples.

BASCOMB: Lez Malezer is an Aboriginal Australian from the Gubby Gubby Batchula language group near Fraiser Island. His big concern is climate change. The long drought in Australia has forced native people off their land and into cities. His people won’t be able to care for the land as their ancestors did.

BASCOMB: Malazer says aboriginal people like him are in a unique position to help defend the environment from the effects of climate change.

MALEZER: A big part of it is in fact for governments to recognize the knowledge, the expertise, the skills that indigenous peoples have in terms of being able to read the climate and understand the situation of the flora and fauna and how they’re best managed. 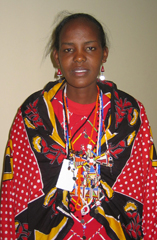 Grace Salam a member of the Maasai tribe in Kenya. She works with NGOs to dig wells, install solar panels and introduce new farming techniques to her community.

BASCOMB: Drought is also a big concern in Africa. Grace Salam is a tall Maasai woman from the Rift Valley Province of Western Kenya.

SALAM: I think it is maybe because of the climate change. We used to know the time of our drought and the time that there’s not drought. But now we can’t predict. We don’t know what comes next. So, the drought can be the whole year and all the cows died. And we’ll be having a very hard time of famine.

BASCOMB: The Maasai depend heavily on their cows. Milk makes up the bulk of their diet.

SALAM: So when the cows die that’s almost the end of the Maasai community life.

BASCOMB: Salam says it’s not just cows that are dying, but medicinal plants as well. She’s worked with NGOs and women’s groups in her community to adapt to climate change.

SALAM: We are trying to drill wells for people to use when there is a drought. We are trying to teach people ways that they will adapt in the situation. Like introducing solar panels. When there’s drought there’s so much of sun. We have already put up the solar panels in 150 households. We’re also teaching them how to plant some crops rather than just keeping animals.

BASCOMB: When they put up solar panels and plant crops, the Maasai are also rooting themselves to one piece of land. They’ve been nomadic pastoralists for millennia so the change to their culture is profound.

But like many indigenous people the Maasai understand that they need to sacrifice some of their culture to survive in the changing world.