From Trash to Cash – and Museums 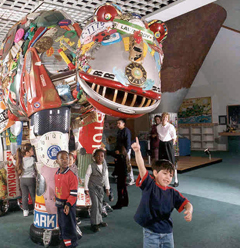 Connecticut has facilities to turn trash into energy, but still has an overabundance of garbage, exporting 400 thousand tons of garbage every year. Host Bruce Gellerman pays a visit to the Trashosaurus at the Children’s Garbage Museum in Stratford, Connecticut. The museum’s goal is to educate kids about the five R’s – reduce, reuse, recycle, recover and re-think.

GELLERMAN: The driver shifts gears and his front end loader plows into a mountain of plastic bottles, jugs and jars.

GELLERMAN: …and then he backs up to charge ahead again…

NONENMACHER: Refuse by any other name.

GELLERMAN: Paul Nonenmacher is director of public affairs at the Connecticut Resources Recovery Authority, and this recycling center in Stratford, Connecticut, is one of two facilities where the state turns trash into cash.

NONENMACHER: You know, there’s lots of euphemisms for it. You can be delicate and call it waste. But it’s garbage. And this is what we do. Garbage is our bread and butter, and we’d like to make a little less of it and be able to turn a little bit more of it into things that people can use every day.

GELLERMAN: That’s of course what happens at most recycling facilities, but Connecticut’s Resources Recovery Authority has also turned its recycling centers into museums: the Trash Museum in Hartford, and this one, the Children’s Garbage Museum in Stratford.

Nonenmacher says it all started about 15 years ago, when recycling began to catch on. 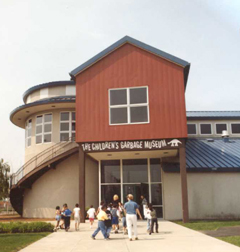 The Children's Garbage Museum in Connecticut. (Courtesy of the Connecticut Resources Recovery Authority.)

NONENMACHER: And all of the sudden people start asking for tours. Well we didn’t have anybody to give tours ’cause we were just here doing the recyclables. So educators were hired to guide tours and then more exhibits were built, and we got Trashosaurus and the museum just kind of filled in around him, and it’s just taken off.

GELLERMAN: That’s right, Trashosaurus. The 24-foot long, 16-foot high T-rex. That’s T for Trash. The statue was built from stuff Connecticut residents dumped into the waste stream. For the past 13 years the statue has loomed large in the Garbage Museum, welcoming more than 50,000 visitors a year.

The day I visited, they were preparing Trashosaurus for a special day. Over the years he’s become something of a state symbol.

GELLERMAN: So this humongous statue made up of (laughing), let’s see, we got pieces of dolls and license plates and tennis rackets, and cell phone stuff and...

NONENMACHER: If anybody’s thrown it away, it’s represented here in Trashosaurus.

GELLERMAN: So Trashasorus is celebrating an anniversary.

NONENMACHER: He’s gonna be 13 years old. We’re having a party for him. In fact, he’s already wearing his birthday hat. He’s acting like a teenager before he becomes one, doing what ever he wants, and we’re gonna have birthday cake and candles and ice cream, and we’re gonna have a party for him. Trashosaurus is someone that just about everyone in Connecticut has met and always gets a kick out of seeing again.

GELLERMAN: Michelle Milczanowski from Barkhamstead, Connecticut, brought her two children – John, five years old, and Patrick, two – to the Garbage Museum. The kids play ‘I Spy’ with T-rex. They get a list of items to find on Trashosauraus. 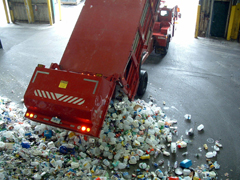 GELLERMAN: A flashlight. Boy. What do you think of Trashosaurus?

JOHN: Really...looks like a real dinosaur but it’s made out of trash.

GELLERMAN: So what do you think? Do you think this has a positive effect with kids, or is it just fun and games?

MILCZANOWSKI: No, definitely positive. My older son, the one you were just speaking with, is in kindergarten, and they have a recycle bin in his class, and he knows to recycle, and at home we do. We go to the dump in our town and we have the recycle bins, and they know that every Saturday we take our garbage, our recyclables, our cardboard, our plastic, our glass. So they’re already learning at a much younger age than we did. And this is very child-friendly

NONENMACHER: Garbage gives us, unfortunately, a never ending fuel supply. It’s hard to imagine our country running out of garbage.

GELLERMAN: One ton of garbage can produce the same amount of electricity as a barrel of oil, but unfortunately, the state has too much of a good thing.

NONENMACHER: Here in Connecticut we have to export about 400,000 tons of garbage every year because we don’t have room for it in our trash to energy plants. Our trash to energy plants are going full blast, 24/seven, 365, and we still need to send about 400,000 tons of garbage to landfills in Ohio, or New York or Pennsylvania or Massachusetts because we can’t take care of our own.

GELLERMAN: Wow. How expensive is that then?

NONENMACHER: Well, just to give you some idea, it costs us about 69 dollars to get rid of a ton of garbage. That’s what the towns pay us to bring it, and it’s up to us to get rid of it. Now if we have room in the plant, great. If we don’t have room, then we’ve got to put it on a truck and send it elsewhere, and that can cost us up to 90 dollars a ton.

GELLERMAN: So it literally pays Connecticut to recycle. There’s gold in them there are heaps of cell phones and electronic devices, and silver, and copper, and all the rest of the stuff the haulers collect and people recycle. For their efforts, Connecticut towns receive ten dollars a ton back from the state authority. But right now, Connecticut only recycles about 25 percent of the material people throw out, or about Trashasaurus’s hindquarter. The state wants to more than double that amount, to 58 percent, and has developed a plan to use a so-called single-stream system to make it easier to recycle. Soon residents won’t have to separate stuff – it’ll be done automatically at the recycling centers.

NONENMACHER: Even if we hit that goal, given increases in population, expansion of the economy, we’re still gonna have that capacity crunch in terms of disposal. So getting us to that 58 percent goal is just gonna keep us at status quo. So we need to do a lot better.

GELLERMAN: Which is where the garbage and trash museums’ real mission comes in – teaching students the 5 R’s of solid waste: reduce, reuse, recycle, recover and re-think. It’s a job for a special breed of educator.

SCIUTO: Garbologists, trashologist, call us whatever you want (laughing). We educate people in garbage. We talk trash and nobody gets into trouble.

GELLERMAN: You think like, you think you’re making a difference?

SCIUTO: Yeah, absolutely. We did an out-visit at Housatonic Community College – they had a health fair. And a woman came up, and here’s a little four year old, says he had gone to here, to the museum on a field trip with his class and saw his grandmother throwing a water bottle in the garbage, and told her, ‘grandma, that doesn’t go in the garbage, it goes in the recycling bin.’ So, we are making an impact. Little kids are going back. We’ll tell ‘em, you know, nag the adults, make sure they do it. You know, make sure they do it, you have to be sure they do it. And they do. So it’s good. It’s pretty cool.

GELLERMAN: Trashosaurus at 13 has really been hauling them in. If a teacher wants to book a class trip to the Children’s Garbage Museum in Stratford, Connecticut, the first opening is in mid-May. May, 2009, that is.